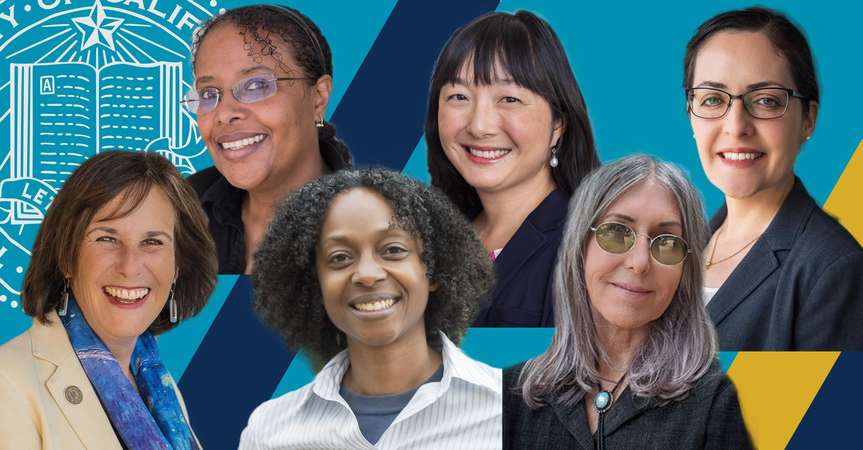 International Women’s Day is more than a day to celebrate the fantastic females around us. It is a day to reflect on the contributions women have made both socially and politically around the world. Women across the globe have used their gifts and talents to help others in myriad ways, and UC Merced is proud of the female faculty as leaders on its campus. Read on for just a handful of the intelligent and inclusive women who make UC Merced the special campus it is.

Tracey Osborne (Management of Complex Systems) — The world is a complex place. But Professor Tracey Osborne is undaunted. She’s taking on the social and political economic aspects of climate-change mitigation in tropical forests and the role of Indigenous people in these efforts; the politics of climate finance — especially carbon markets; global environmental governance; and climate equity and justice. She’s interested in natural climate solutions, particularly tropical forests, and spends part of her research time in Mexico and in the Amazon — Ecuador, Peru and Guyana — working with Indigenous communities on sustainable land-use and forest practices that serve as important climate change mitigation strategies. She wants to know how people transform economic systems so they are also sustainable for people and the planet. Read more about Osborne’s recent work here.

Marjorie Zatz (Sociology) — A trained sociologist whose research focuses on race, gender, the law, and most recently on immigration policy and its effects on youth and families. Since the summer of 2020 Marjorie Zatz has served as interim Vice Chancellor of Research and Economic Development. Her previous work as dean of the Graduate Division earned her a place in Diverse: Issues in Higher Education’s 2019 Top 35 Women in Higher Education list. In her present role, Zatz’s driving goal is to reach Carnegie Classification of Institutions of Higher Education R1 status — something only earned by doctoral-granting universities conducting exceptional research activity. Zatz brings such zeal to her work that previous colleagues have likened her to the Energizer Bunny because of the energy and enthusiasm she brings to the job. Read more about her latest role here.

Sora Kim (Life and Environmental Systems) — Professor Sora Kim’s research looks far into the past to better predict the future, and her work has a bit of a bite to it, too — she analyzes stable isotopes in ancient, fossilized shark teeth to learn about climate change. The data encoded in the teeth can provide insight into tectonic plate movement, ocean currents and huge climate shifts, and could make future climate models more complete and more accurate. Kim is a young researcher, but her work and her commitment to diversity have already earned her recognition as an emerging scholar and a focus of pride for her department. Read more about her work here.

Asmeret Asefaw Berhe (Life and Environmental Sciences) — Berhe is a world-renowned expert in soil biogeochemistry, a field that people are increasingly recognizing as crucial to solving climate change. She’s a prolific publisher of research results, a multiple award winner and a frequent guest speaker, including having delivered a TED Talk at the international TED conference in 2019. Last year, she was named a winner of the American Geophysical Union’s Joanne Simpson Medal for Mid-Career Scientists because of her contributions and the bright future ahead of her. But Berhe is creating her legacy in other critical areas, too. She has been recognized for promoting the inclusion of women and minoritized populations in science and academia. She is also a member of several organized efforts to address harassment, bias, abuse and discrimination in academia — work that is extremely important to her. She holds the Ted and Jan Falasco Endowed Chair in Earth Sciences and Geology and was among the 2020 honorees by the Carnegie Corporation of New York as an extraordinary immigrant. Read more Berhe’s work and watch her TED Talk here.

Teenie Matlock (Cognitive Science) — Vice Provost for Academic Personnel and cognitive science Professor Teenie Matlock received the Athena Award for Academic Leadership by the Women in Technology Initiative at the University of California. She was selected from a nationally competitive pool of candidates exemplifying high technical achievement along with support for women in technical fields and advancements for gender equity. Matlock researches how humans communicate and reason. She is known for early contributions to the field of human-computer interaction. Read more about her most recent award here.

Denise Payán (Public Health) – Professor Denise Payán is a health policy researcher whose interests include examining the health policymaking process; evaluating interventions to address obesity and nutrition-related health disparities; and understanding how policy impacts health behavior. She is the principal investigator of the Community Health & Innovative Policy (CHIP) Lab and Deputy Director of the statewide research translation center known as the California Initiative for Health Equity & Action (Cal-IHEA). Most recently, she conducted research on how the COVID-19 pandemic has influenced food security for the Latinx community. Collaborating with other public health professors and a registered dietician, Payán shares research on how this community is disproportionally affected. Read more here.