Latinas in Law: Alumnae Advocate for Immigrants in Valley 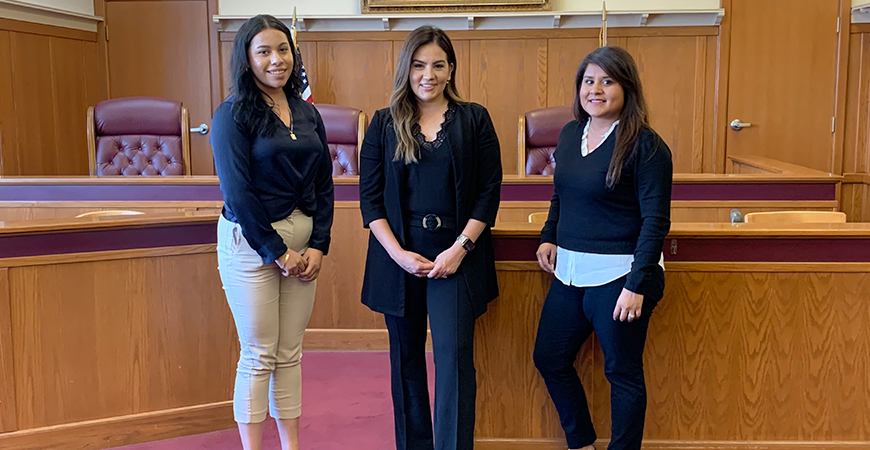 Left to right: Alejandra Tenorio Zurita ('20), Linda Barreto ('08) and Jessica Jaramillo Perez ('14) are part of the team at the New American Legal Clinic.

Linda Barreto ('08), Jessica Jaramillo Perez ('14) and Alejandra Tenorio Zurita ('20) all knew at a young age that they wanted to become lawyers. What they didn't know, however, was that UC Merced would play a pivotal role in merging their paths to create a powerhouse that advocates for hundreds of immigrants in the Central Valley.

All three alumnae are Latina, Valley natives and working in the field of immigration law. They are part of the New American Legal Clinic (NALC) at San Joaquin College of Law (SJCL) in Clovis. Founded in 2012, the NALC is a full-service immigration clinic that trains law students in immigration law and serves under-resourced individuals in the community. Barreto, a professor at the college, is the executive director of the clinic; Perez is a staff attorney after a stint as a volunteer attorney; and Zurita, a third-year law student, is a research assistant.

In order to get a glimpse of the personal passion that drives each of these professionals, one must make stops in cities along Highway 99. All three agree that their experiences at home and school instilled in them the discipline and hunger to fight for what is right and defend those who are unable to defend themselves.

Ticket to her Future

Barreto was born and raised in Fresno. In 2005, she joined the inaugural class at UC Merced, where three years later she received a degree in psychology.

"We were pioneers. I loved the opportunity to open a new campus," she said. "I never thought I would have the chance to go to a UC so close to home and receive a prestigious education."

People told Barreto she wanted to be a lawyer because as a child she liked to argue. Chuckling, she said it's been more about proving a point and doing what is right.

That sentiment was in full drive when she received a citation for making a left-hand turn on campus. Barreto went to traffic court, diagramed the entire incident, and successfully fought the ticket. Prior to this, she had thought twice about attending law school after her time at UC Merced, but she realized there was no turning back.

Barreto said taking the reins of the NALC reminded her of the pioneer spirit she felt when embarking at UC Merced — an institution that prepared her to be on the same page as her counterparts in law school.

Perez was born in Merced and raised a few miles away in Winton. She majored in political science with a minor in Spanish. A member of the Class of 2014, she was part of the Associated Students of UC Merced (ASUCM), which prepared her for advocacy and public speaking. She also studied bylaws and even discovered a grant for undergraduate students that had not been used for some time.

Out of everything she encountered at the university, Perez said it was the different kinds of people that allowed her to grow.

"Because of UC Merced's diversity, it was easier to engage with others," she said. "I took part in public speaking, ran for office and advocated for students I could relate to."

During her undergraduate years, Perez said, she took nothing for granted. That feeling was nothing new since she said Latinos in general have so much gratitude for the opportunities they receive.

"I had moments where I could vividly recall where I was sitting in class and thought, 'Wow, am I lucky to be here,'" she said. "It's not something that's expected or guaranteed that we're going to get. It gives me a bigger appreciation for everything."

Out of all the support Perez found, it was a chance meeting with Barreto that filled a void she longed to fill.

"It's hard to find people to confide in and receive help from, but it's getting better with time," she said. "However, I took Professor Barreto's class at SJCL and instantly felt I could relate to her. I had never had this before. It's hard to find this as a Latina. Finding a female attorney mentor was a big reason why I applied to work here at the clinic."

Todo Para La Familia (Everything for the Family)

Zurita was born in Merced and raised in the town of Planada. She majored in Spanish with a minor in political science. It was an easy decision to attend UC Merced because of its proximity to her hometown.

"It was my first step into the real world," she said. "Some classes at Merced were the size of my high school graduating class."

But becoming a Bobcat didn't mean she was settling one bit. Zurita knew she was receiving a world-class education that the UC system is known for. She had several resources at her disposal, including professors from the Department of Political Science, pre-law courses, the Pre-Law Society and ASUCM. She was also making connections with others in the field.

"The interactions at UC Merced played a role in me deciding to go to law school," she said. "I heard of alumna Linda Barreto from a staff member at the library, who recommended I learn more about her. That opened the opportunity for me to network."

Zurita's connection with her family and heritage are what keep her going to finish law school. She said fulfilling this dream is not only for her but for her parents, who have done so much for the family.

"Coming from a small town, it's hard to excel in academics and finding a job," she said. "Being a Latina has given me a lot of strength and motivation because I look into my roots, and I see all the struggles my parents had to go through. They are first-generation immigrants, and no one in my family obtained any type of education until I did. It's very empowering."

The NALC keeps Zurita busy with a variety of immigration cases, but she's been used to it. In February, she assisted her grandmother in renewing her permanent resident card. In the past, she also worked with a nonprofit organization that helped recipients of the Deferred Action for Childhood Arrivals (DACA) program. 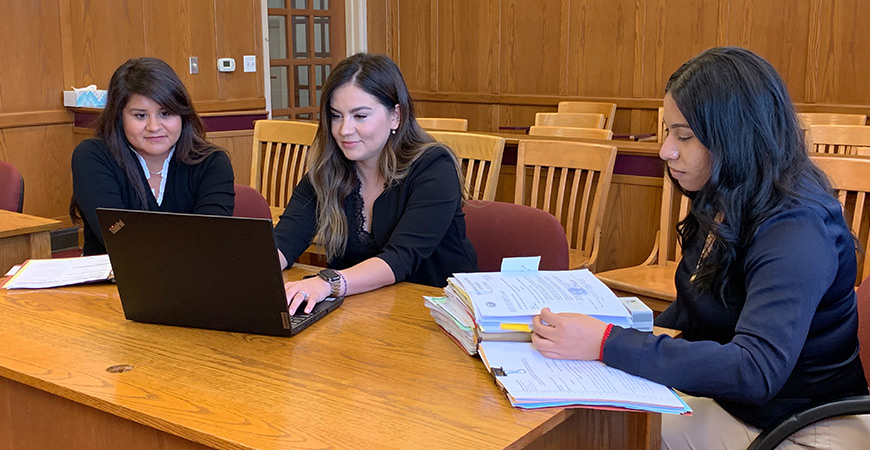 The three alumnas and their team work on hundreds of immigration cases at a time.

A coworker gave Barreto a tote bag that reads "empowered women empower women," which she said is exactly what their team is all about. The icing on the cake is that all three can say they have the same alma mater.

"There's room for all of us," Barreto said. "As Latinas, we can help each other achieve success. I'm happy that that's something we can do at SJCL and UC Merced.

"The other day I called this office 'Bobcat City.'"

Zurita said collaborating with two fellow Bobcats has been an inspirational and rewarding experience. Although at times the thought of giving up on law school may cross her mind, she looks to her Latina mentors at the clinic and is reminded that if others can do it, she can do it as well.

"Coming here and being able to work with two other Latinas who went to UC Merced, that really sets to me the role models," Zurita said. "Being able to be part of their team is very rewarding because I get to learn from people who come from very close to home and who are expanding on what they've done."

Latinas make up less than 2% of all lawyers in the United States, even though they represent nearly 1 in 5 women in the country, according to the Hispanic National Bar Association. Perez hopes that statistic increases, but still takes great pride in knowing that she's an advocate at this stage.

"It's very empowering to be part of the small number of Latina attorneys," she said. "We assist a lot of people of Hispanic origin here at the clinic, and I love to give them a sense of comfort by speaking their language. We want to do right by them."

At any given time, the NALC has a revolving door of approximately 600 immigration cases. As cases close, new clients are brought in. The clinic's services are completely free.

"Our families struggled, they weren't able to afford an attorney, and they didn't know how to file a lot of the paperwork," Barreto said. "Because the services we offer here are free, we can still give really great quality legal services and make that one less thing they have to worry about because they know they have competent representation."

Barreto, Perez and Zurita were the first in their families to go to college and then law school. They have paved the way for others to follow in their footsteps, just like those who came before did for them. All three of them are now giving back to their communities, including students who are looking for that beacon of inspiration.

In their own words, they offer these messages to their fellow Bobcats:

"Reach out, you have to ask for help, and you have to find people who inspire you and who you feel you can connect to," Barreto said. "The best investment you can make is in yourself. If you're going to bet on anybody, bet on yourself."

"Just do it. Just go for it. Don't be afraid to be the first one," Zurita said. "It's time for people to just reach out to others and encourage them to keep going."

"You deserve to speak your mind, and you deserve to stand up for what you believe in," Perez said. "Don't let anybody tell you otherwise."