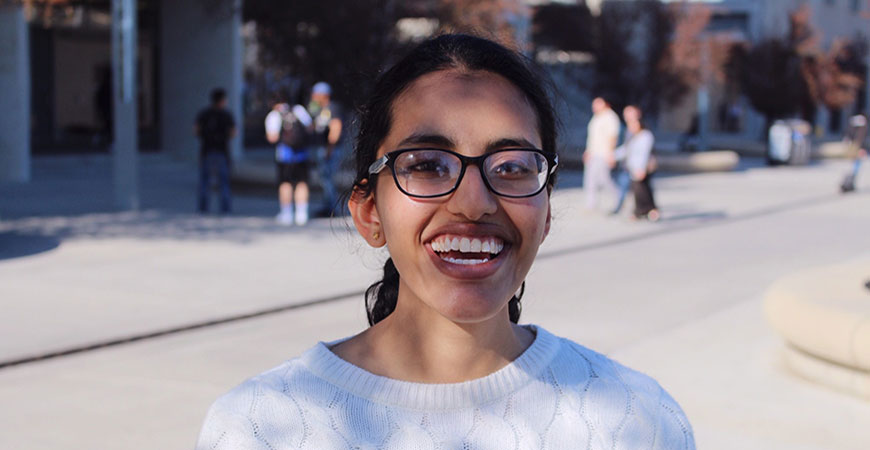 Akhila Yechuri is taking what she learned as an undergrad at UC Merced to Hyderabad, India, researching health disparities as the campus’s first undergrad to earn a Fulbright scholarship.

“I'm so overwhelmed and excited,” she said. “This is really thrilling.”

Yechuri studied public health and graduated from UC Merced in August 2018, then went home to the Bay Area to work while she decided on her next steps — possibly including graduate school. Inspired by UC Merced graduate students Violet Barton and her daughter Danielle Bermudez — both Fulbright recipients — Yechuri applied for the scholarship last fall.

The long process of getting letters of recommendation, securing a research connection in the country and writing a research proposal ended last month when she learned she’ll be leaving in August for nine months in her home country. She hasn’t been to India in nine years, though she still has family there, and will be able to see them while she’s working.

“I worked with my research connection at the Center for Social Exclusion and Inclusive Policy at the University of Hyderabad to home in on my research question and design a Project,” she said. “I'll be studying health disparities among Hindu and Muslim women who live in slums in Hyderabad.”

Yechuri characterizes Hyderabad, where she is from, as uniquely multi-ethnic. Part of the reason she chose India is to experience her native country as an adult. But she’s also interested in the health policies and social factors that disparately affect low-income women.

“I, thankfully, have a lot of qualitative research experience from UC Merced, especially from working with public health professors Mariaelena Gonzalez and Denise Payan, that I can bring to bear on several different angles of the topic,” she said. She must design the tools, including surveys and focus groups, she’ll use for her research, and hopes to get a minimum of 60 women to participate.

Yechuri credits her professors, includingSandie Ha and Sholeh Quinn, writing coach and UC Merced English Language Institute Coordinator Belinda Braunstein, James Barnes at the Calvin E. Bright Success Center and the team she’ll work with in India with helping her prepare her application for the award.

“Everyone has been so kind and helpful,” she said. “There’s no way I could have done this by myself. It was such a collaborative effort — I’m really grateful to the team at the University of Hyderabad for being so willing to work with me.”

While she waits to leave for orientation in New Delhi, India, Yechuri will continue her work with the Oakland Unified School District, where she creates reading and literacy programming for students who are homeless and highly mobile.

She’s also considering what she’ll do when she returns.

“I’m hoping to get a paper published after my study, and help organize a conference where I can present my research. But I also want to create something tangible. It’s really important to me that I don’t just ‘research’ the community and then leave, especially as an Indian woman who is part of the diaspora,” she said. “After that, I’m leaning toward law school because I’m very interested in issues at the intersection of human rights and health.”

Yechuri said she’d encourage all UC Merced students to take advantage of the resources available to them and to apply for scholarships and internships.

"Ultimately, I don't think the impostor syndrome ever goes away. But take advantage of as many opportunities as you are eligible for,” she said, “and try not to discount yourself while doing it. Any application is an idiosyncratic process, so trying is the most important part."