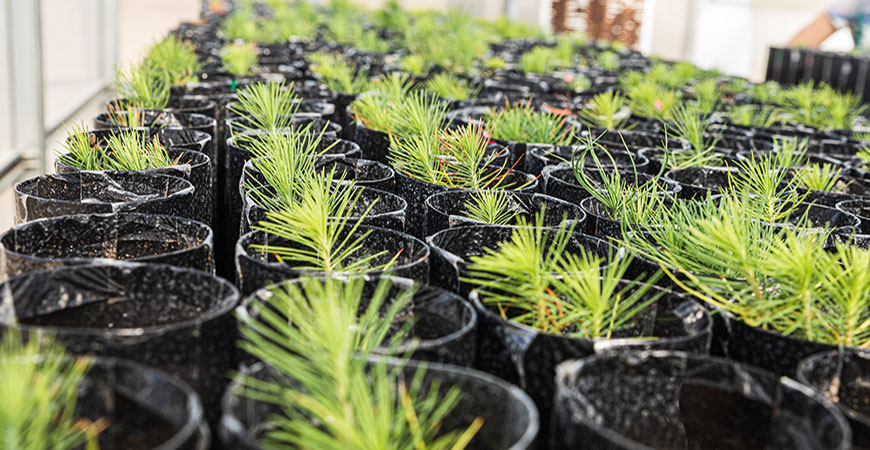 Climate change is bad news for forests, and a new study by UC Merced Professor Emily Moran demonstrates one aspect of that news.

But whether that is entirely bad depends on the degree of change in the number of young trees.

“One of the reasons we’re so concerned about forest fires is because of forest density,” she said. “If there are somewhat fewer seedlings and saplings, there’s less fuel for big destructive fires. On the other hand, if there are too few seedlings there won't be a next generation to replace adult trees when they die.”

Besides providing wood and habitat for wildlife, trees are extremely good at sequestering carbon — but they must reach maturity to perform these functions efficiently.

Understanding how climate and other environmental factors such as shading from adults affects how seedlings survive and grow to maturity is the focus of “Negative Impacts of Summer Heat on Sierra Nevada Tree Seedlings,” a study she conducted with colleagues at the U.S. Geologic Survey (USGS) and published in the journal Ecosphere this week.

Moran said she and USGS researchers Adrian Das, Nate Stephenson and Jon Keeley noticed a decline in the tiny trees’ survival based on seedling data gathered at sites in Sequoia and Yosemite national parks from 1999 to 2008 at 5,000-8,000-foot elevations. The species studied include Ponderosa, Jeffrey, sugar, western white and lodgepole pines; sequoias; black oaks; red and white firs; and incense cedars.

Temperatures have been rising at the sites since at least the mid-1970s, and also increased over the period of the study. The scientists built a statistical model to parse the effects of climate — rising temperatures and variable precipitation — on seedling species and size, the occurrence of controlled burns and the density of nearby adult trees. Results showed that higher July maximum temperatures led to more death and less growth in most of the 11 tree species studied.

They calculated what these results would mean given projections of higher temperatures and altered precipitation because of climate change by 2080 and found that potential changes in growth were more pronounced than changes in survival, and both were mostly negative.

The only species that exhibited higher survival (and little change in growth) with higher temperatures was the ponderosa pine. But the pines suffered extensive adult mortality during the drought of 2012-2016, in part because the climatic stress prevented them from fighting off bark beetle attacks.

“The older trees produce the seedlings, so we cannot get more young trees without them,” said Moran, who’s with the Department of Life and Environmental Sciences in the School of Natural Sciences and is an affiliate of the Sierra Nevada Research Institute. 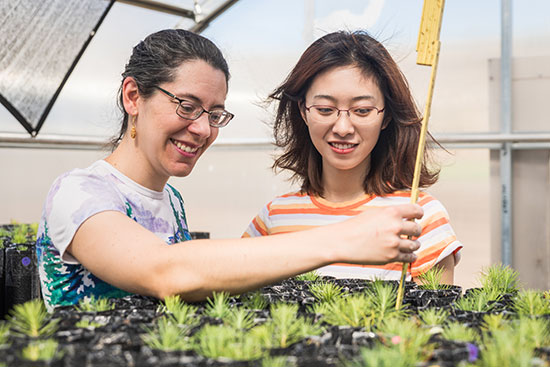 Professor Emily Moran, left, and graduae student Mengjun Shiu work with seedlings in the greenhouse and in the field.

Many factors contribute to tree survival, including species differences, soil nutrients and the light available to young trees. Some sites were affected by fires, and while many young trees died in the fires or in the year following, after a year or two post-fire, the survivors thrived — likely because of reduced competition for resources.

But climate is the factor that’s changing in a harmful direction, Moran said.

Even though pines tend to be less shade-tolerant than firs and cedars, they did better than expected in partial shade, perhaps because the shade helps regulate temperature.

The next steps will be to put together knowledge of how climate and other factors influence various life stages of trees and see how changes in these factors might affect the types and sizes of trees in the forest over the next century. That is important for assessing whether the declines in seedling survival and growth will simply thin out the forest — or cause it to disappear.

However, trees might have a secret weapon — genetic variation. Much like humans vary in their susceptibility to disease, not all individuals of a given tree species respond to climate in the same way, and that could potentially let them evolve to track changing conditions.

Moran recently received a National Science Foundation EAGER grant to adapt a forest simulation model that tracks the fate of individual trees to include inherited variation in climate responses.

“We know that trees have this genetic variability,” Moran said, “The question is — given that they take decades to mature — do they have time to adapt to these rapidly changing climate conditions and how much does that adaptive response change our predictions of what forests will look like and how they will function in the future?”