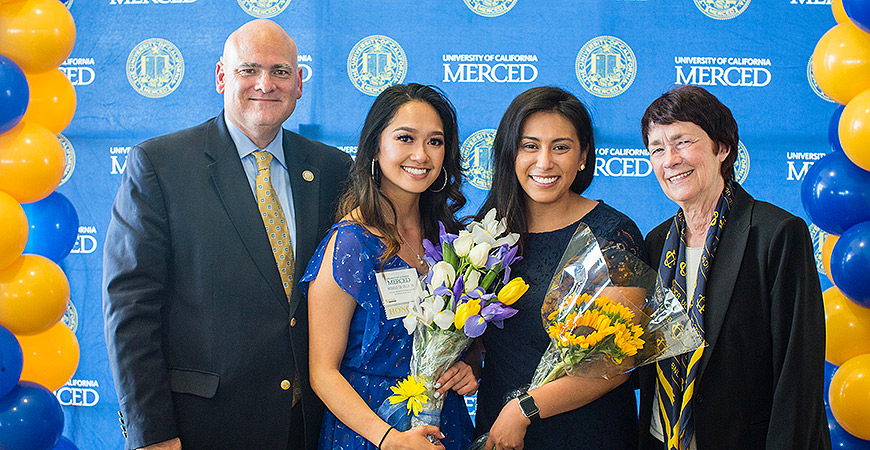 In creating scholarships to help future generations of Bobcats succeed, UC Merced staff members and alumnae Monique de Villa (’16) and Danielle Armedilla (’12) are cementing the legacy they are leaving for campus.

De Villa and Armedilla were honored for their generous contributions at last month’s scholarship signing ceremony on Bobcat Day — a thank-you tradition that began a few years ago.

“I can’t tell you how rare it is to have alumni as young as you are and at the beginning of your careers, to step up and decide to endow a scholarship,” Chancellor Dorothy Leland said. “It is really phenomenal. It shows not only your love for this university, but your generosity of spirit.” 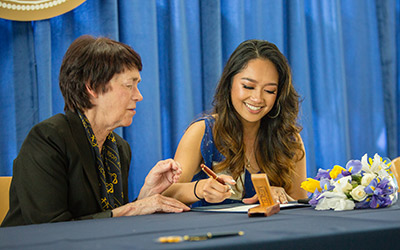 De Villa received her bachelor’s degree from UC Merced in 2016, studying public health. While a student, she was extremely active in the campus community, participating in the Pilipino American Alliance, Multicultural Student Council, Ohana, Alpha Phi Omega and the Student Alumni Association.

She is the special projects coordinator in External Relations, working alongside the chief of staff and vice chancellor. More recently, she has taken a lead role in managing UC Merced’s social media and collaborates with campus partners.

De Villa credits her determination to persist in the face of adversity to the values her immigrant parents instilled in her and her younger sister, Riana. De Villa’s parents taught their daughters that education would open doors to their futures and demonstrated that anything is possible with hard work, the right attitude and an unwavering will to succeed.

By setting up the Marinelo Sadsad and Amercia de Villa Endowed Scholarship, de Villa joins a special group of alumni that is instrumental in expanding scholarships to ensure the success of future Bobcats.

“As a student, I saw my peers working hard through late hours of the night and early hours of the morning to make the grade, plan a club event or help another student study to pass a class,” de Villa said. “Now as an alumna and staff member, I see my colleagues working just as hard to give these students the appropriate resources and a fighting chance to keep pursuing their degrees.

“Although this scholarship is about them, it’s also about my parents.” 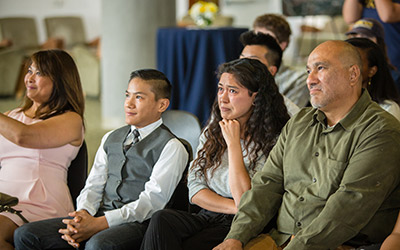 Danielle Armedilla established the M.A.D. Endowed Scholarship in honor of her siblings, Maxximus and Alexxis.

Armedilla, a first-generation student when she attended UC Merced, earned a bachelor’s degree in psychology in 2012 and went on to earn a master’s in higher education from Fresno State in 2017, all while working in UC Merced’s Office of the Chancellor.

In her position as chief of staff for External Relations, she sees the direct effects charitable donations have on the campus and especially students.

“My success has been guided by the opportunities I received during my time at UC Merced,” Armedilla said. “When I thought about endowing this scholarship, I knew I wanted to make a difference and give back to my alma mater.”

She recently established the Making a Difference Endowed Scholarship to support first-generation students from single-parent households, as well as students who are single parents during their time at UC Merced.

“I knew I wanted to honor my brother Maxximus and my sister Alexxis — they mean the world to me,” Armedilla said. “I know wherever they go, or whatever they do, they will always make a difference.”

Armedilla serves as a liaison between the Office of the Chancellor and internal and external stakeholders, providing assistance on critical initiatives such as the Presidents’ Alliance on Immigration and Higher Education. She is often the first point of contact with external partners, meeting with individuals such as CNN political commentator and commencement speaker Maria Cardona, chair of the California State Board of Equalization Fiona Ma and president of the Intel Foundation Roz Hudnell. More recently, she has been leading UC Merced’s marketing efforts while working with campus partners and the University of California Office of the President.

I can’t tell you how rare it is to have alumni as young as you are and at the beginning of your career, to step up and decide to endow a scholarship.

To learn more about how to establish an endowed scholarship or other giving opportunities, please contact 209-228-4401 or email giving@ucmerced.edu.