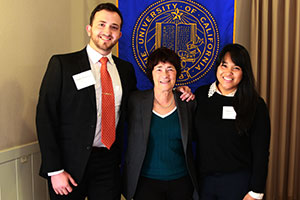 Jessica “JaeJae” Julian (2010) and Marko Zivanovic (2014) are proving that giving back shortly after graduation can be possible.

During the campus’s Giving Tuesday fundraising efforts last December, Julian and Zivanovic became the first alumni to create scholarship endowments at UC Merced by pledging $10,000 each over the next five years.

“I knew there was an opportunity to make a fantastic impact,” said Zivanovic, who graduated with a bachelor’s degree in applied mathematics.

Zivanovic learned about the scholarship match through the Alumni Association Board, which he joined last October. He knew instantly that he wanted to help future Bobcats.

“I come from a privileged place because my parents could afford to send me to college,” Zivanovic said. “I know the majority of UC Merced students don’t come from that background, so I want to extend as much of an opportunity to current and future students as possible.”

His goal in establishing an endowed scholarship is to help retain high-achieving students who might consider leaving the campus without added support.

“We have a lot of needs-based scholarships, but we don’t have many scholarships targeting high-performing students,” he said. “A number of students I knew transferred away. If there was a scholarship available, it might have made a difference.”

Once his pledge is fulfilled, the endowed scholarship will be available to students in the School of Natural Sciences who have at least a 3.7 grade-point average.

For Julian, who was the first in her family to graduate college, receiving scholarships during her time on campus alleviated a lot of stress for her family.

“Without scholarships, I wouldn’t have attended UC Merced,” said Julian. “I would have attended a local community college, which was my plan before I took a tour of UC Merced and knew this was the place I wanted to be.”

Since graduating with a bachelor’s degree in psychology and cognitive science, Julian has worked in several departments on campus and now serves as an alumni relations specialist with Development and Alumni Relations.

“One thing that has stuck through each of my experiences is the care that the staff has for students here,” she said. “It is really exciting to be a part of that culture and tight-knit community where we foster growth and commitment.”

Julian wants to see future Bobcats succeed and she thinks alumni play a large role in making it happen.

“I think it’s important to give back to campus — especially as alumni — to be role models,” she said. “It starts with us.”

Julian and Zivanovic both chose to name their endowments after their families.

The Ganio-Julian Family Endowed Scholarship Fund honors Julian’s father, a Filipino immigrant farm worker who settled in Delano. It is also a tribute to her mother, who is from Hawaii, and has worked relentlessly to raise Julian and her four siblings.

“I want to honor their strength and resilience,” she said. “Through this scholarship, I am leaving a legacy that will live beyond me and my family.”

By establishing the Zivanovic Family Endowed Scholarship Fund, Zivanovic is recognizing his parents, who came to the U.S. from Yugoslavia nearly five decades ago.

“They are an immigrant success story,” he said. “I couldn’t have achieved everything I’ve achieved without them.”

Julian hopes her gift will produce a ripple effect.

“This scholarship will help support a future student,” she said. “And hopefully, one day they will be in this seat supporting other students.”