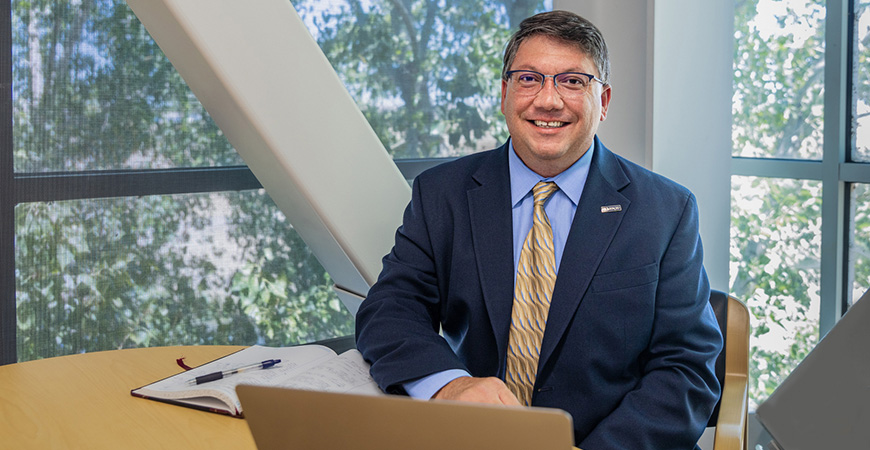 “Dr. Hratchian’s appointment is another signifier of our momentum in research excellence,” said Chancellor Juan Sánchez Muñoz. “He will be an essential leader and contributor as we accelerate our drive toward R1 status.”

Hratchian, who is from Michigan, joined the faculty in 2013 and most recently served as chair of the Department of Chemistry and Biochemistry.

Prior to UC Merced, he worked as a research scientist with Gaussian Inc, a company that develops, licenses and supports computational chemistry software.

After a few years working in industry, Hratchian said he missed the university environment and working with students. When he learned of an open chemistry faculty position at the newest UC, he decided to apply.

“There was already a solid set of computational science faculty here in my area of expertise and that was an attraction,” he said.

During his interview, it quickly became clear that UC Merced would be an exciting place to work.

“After the first day of the interview, I thought, ‘I really want this job,’” Hratchian said. “The idea of being part of building a research institution within the University of California system was especially intriguing. It seemed like this would be a department that was going to grow itself well and I wanted to be a part of it.” 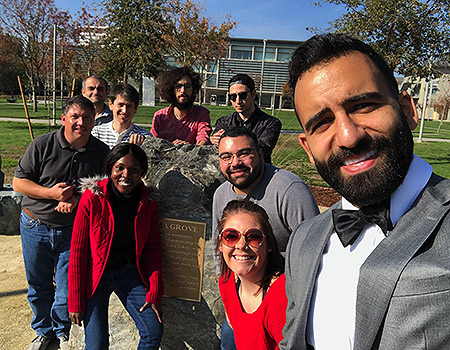 Hratchian has served in several leadership roles at UC Merced, including as interim co-director of Cyberinfrastructure and Research Computing and as chair of the Academic Senate’s Graduate Council. He also served on the Senate’s Divisional Council and was UC Merced’s representative on the UC systemwide Coordinating Committee on Graduate Affairs.

He earned his bachelor’s degree in chemistry from Eastern Michigan University and completed his Ph.D. in Chemistry at Wayne State University in Michigan. In recent years, Hratchian was honored with a Hellman Foundation Fellowship, an NSF Career award and an Alumni Achievement Award from his alma mater.

“I am delighted to have Hrant leading the Graduate Division. His conscientious, dedicated service in several leadership roles has prepared him well for this new position. I look forward to benefiting from his energy, creativity and clarity,” Executive Vice Chancellor and Provost Gregg Camfield said. “I also thank Chris Kello, not only for his excellent stewardship of Graduate Division these past two years, but also for working with Hrant through the leadership transition.”

Dr. Hratchian’s appointment is another signifier of our momentum in research excellence. He will be an essential leader and contributor as we accelerate our drive toward R1 status.

While serving in his new role, Hratchian will maintain his research group of six graduate students and one undergraduate student. His research interests include the development and application of efficient computational chemistry methods to explore the unique properties of transition metals and catalyzed chemical transformations.

Under his leadership, Hratchian said the Graduate Division will continue to expand the resources and opportunities already established over the last several years under previous deans.

“We will continue building on our recognized and current areas of expertise, but we will also grow in our breadth in a way that honors and advances the UC vision of being the state's research-intensive institution of higher learning,” he said. “Over the next six months, we will continue the campus’s recovery post-COVID for the graduate and postdoctoral communities and build stronger support for research and faculty efforts that support graduate training and postdoctoral training.”

Key objectives that will help the university with its goal of reaching R1 designation by 2030 include:

We will continue building on our recognized and current areas of expertise, but we will also grow in our breadth in a way that honors and advances the UC vision of being the state's research-intensive institution of higher learning. 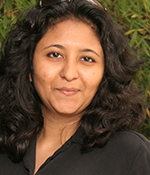 Physics Professor Sayantani Ghosh has been named associate dean for Graduate Division, succeeding Professor Asmeret Asefaw Berhe, who is serving as the director of the Office of Science in the federal Department of Energy.

Ghosh’s role includes leading graduate student and postdoctoral scholar professional development programs and serving as a liaison between faculty and the Graduate Division, particularly with respect to training programs and spearheading special projects.

“Our graduate students are one of our campus’s greatest assets. I look forward to working with them, assisting as much as I can to achieve their goals,” she said. “I am also very excited to start building up our nascent program for postdoctoral scholars.”

“Professor Ghosh has an outstanding record as a researcher, as a graduate mentor, as a colleague and as a leader in training programs and training grants. She's the perfect choice for this important leadership position,” Hratchian said.

The new dean has already hit the ground running, meeting with graduate students, staff and leadership to learn about the areas where the Division is doing well and looking for places to improve.

“We will strengthen existing close collaborations between the academic schools and the Division to help develop and grow our graduate programs,” he said. “We will also strive to increase the research profile on campus with a strong relationship between Graduate Division and Office Research and Economic Development and working with the research opportunities and student success teams in the Division of Undergraduate Education.”