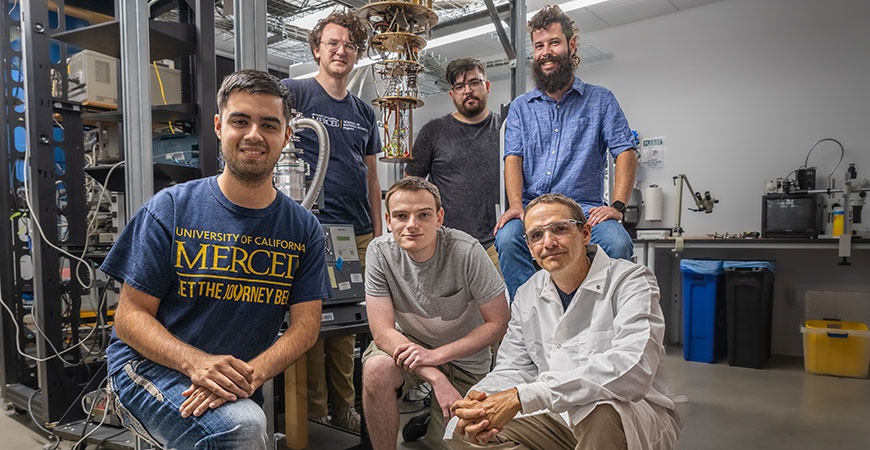 Professor Jay Sharping, lower right, and the students in his lab will have enhanced research capabilities with refurbished dilution refrigerators. Images by Veronica Adrover.

Researchers and students in the departments of Physics, Mechanical Engineering, and Materials Science and Engineering working on quantum physics will have upgraded equipment soon, thanks to a grant from the Department of Defense.

Professor Jay Sharping is refurbishing two dilution refrigerators that are required to perform measurements on samples at temperatures as low as 10 millikelvins (mK) — near absolute zero.

“Pretty much everything stops at those low temperatures — any gas except for certain species of helium — any gas turns into a liquid or a solid,” Sharping said. “The reason to do that is if you work with any kind of material, for example silicon, there's just a lot of thermal energy at room temperature and you don't know whether that noise is causing problems.” 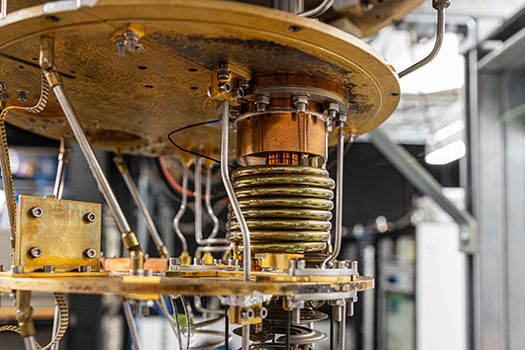 The extreme cold generated by the dilution refrigerators removes thermal noise from experiments and provides visibility to quantum behavior and other fundamental physical processes that are normally obscured by thermal motion of the matter comprising the system.

“Numerous postdoctoral scientists, graduate students and undergraduate students have been trained in system operation and have performed their research. Notably, three Ph.D. students have gone on to be employed in national laboratories where similar instruments are used,” Sharping wrote in his grant proposal. “Since the system was installed, we have obtained five grants and published more than 10 articles which would not have been possible without the DRs.”

But the refrigerators are nearing the end of their lives, so instead of asking for money to buy two new refrigerators, Sharping requested money to refurbish the old ones and relocate them to his new lab in the Biomedical Sciences and Physics Building on campus, which opened as part of the Merced 2020 Project. He’s also adding new instruments that will enable a broader range of state-of-the-art research. Through its minority-serving institution instrumentation grants, the Department of Defense gave Sharping $565,000.

“We can get them both working well and have a suite of new instrumentation for less than the price of buying one new dilution refrigerator,” Sharping said.

Quantum physics has been receiving a lot of attention in the United States and around the globe, Sharping said. The National Science Foundation lists it among its 10 “big ideas” and the U.S. Senate has heard proposals related to national security and infrastructure and workforce development. But most of that kind of science requires performing measurements near 10mK, and a quantum-ready workforce needs training.

Sharping is also creating a new undergraduate laboratory course for Physics in Modern Optics and aims to incorporate photon counting as one of the modules, along with implementing a program for undergrads to help monitor experiments while they are happening.

“Our students are learning how to operate the system, because it is a multi-day process to go from room temperature down to 10mK and it often doesn’t work, and outfit the experiments that are in the sample chamber,” Sharping said. “They will be studying how materials behave in a magnetic field because there are superconducting magnets that are part of the system, capturing superfast events, characterizing materials, photon counting, nanopositioning and a lot more. It’s a great experience for them.”

Fire scientists typically respond to agency opportunities and conduct research in response to past wildfires. But it is time they take more proactive,...