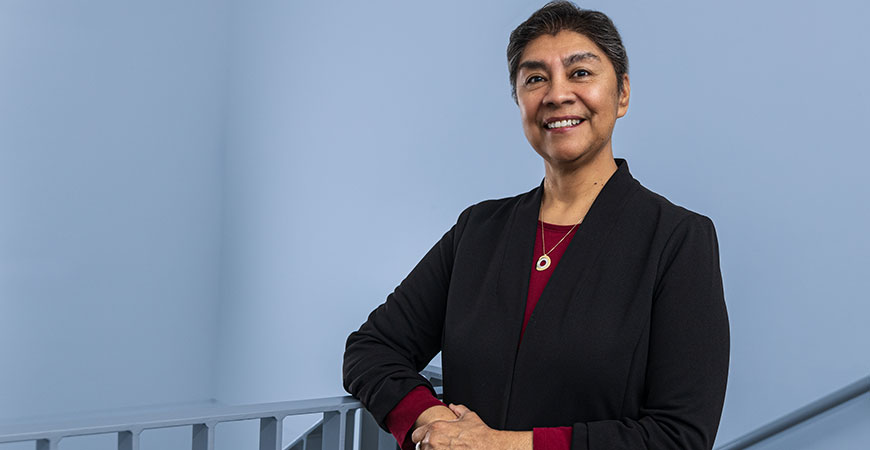 Delia Saenz says the Valley's farming rhythms remind her of the south Texas region where she grew up.

Horses, cattle and other livestock dotted broad, flat ranchland as the rental car followed Highway 140 toward Catheys Valley. It was February 2022. Delia Saenz was seeing the San Joaquin Valley for the first time. All the views were fresh and new.

“I was struck by the beauty of the land and by the life emerging from the fields. Seeing all the critters,” she said. “It took me back to my childhood.”

Saenz was reminded of the farm in south Texas where she spent weekends watching grandma milk cows and cousins ride pigs like little rodeo stars. The farm was 40 miles northwest of her family’s home in Brownsville, a port city hugging the U.S.-Mexico border along the Rio Grande.

Saenz's self-tour through rural Merced County was the latest map point in a life that has taken her from the Gulf Coast to Ivy League halls, from Notre Dame to Arizona’s Valley of the Sun. Within weeks of that initial visit to the Central Valley, she began her new role as UC Merced's Vice Chancellor and Chief Diversity Officer, leading the Division of Equity, Justice and Inclusive Excellence.

Saenz brings the academic rigor of a social psychologist and the sharply honed talents of a facilitator and problem-solver to a young university that has staked its reputation as a place where students from underrepresented backgrounds and cultures are welcomed and nurtured – a place to thrive.

Founding faculty member and Vice Provost Teenie Matlock, who led the search committee that recommended Saenz, described her as “a capable and visionary leader who can transform inclusion and diversity not just at UC Merced, but in the Merced community and the UC as a whole.”

Saenz’s schedule at UC Merced has been a whirlwind, meeting with students and campus colleagues but also with Merced city leaders and with nearby peers such as those at California State University-Stanislaus. She asks questions. What strategies and goals do they share? How can she connect with them? How can they work together?

“Wasn’t that evidence enough to say to this country, ‘The capacity and the intellect are there. Let’s provide opportunities going forward’?” Saenz said. “But we reverted to the habits of discrimination and segregation, and revoked those opportunities.

“And isn’t that the issue we’re still facing? Opportunities are being denied. I think students and employees can rise to limitless levels of success if they are simply given a chance.”

After earning a bachelor’s degree in psychology at Pan American University in Brownsville, Saenz enrolled at Princeton University, where she received a master’s in psychology and a doctorate in social psychology. She was one of only six Latino or Latina graduate students university-wide at the time. She wanted to land an academic position in Texas, but instead joined the faculty at the University of Notre Dame.

Not many people have the depth of knowledge and breadth of experience that Delia brings to UC Merced.

After three years in South Bend she went to Arizona State University, where, except for a brief stint at tiny Bennington College in Vermont, she worked for more than 30 years. While maintaining a role as a professor in the Department of Psychology and the Hispanic Research Center, Saenz matched her academic curiosity to real-life application with numerous administrative roles. She served as director for diversity and inclusion for research teams that sound like they would fit right in at UC Merced, such as the Center for Quantum Energy and Sustainable Solar Technologies, and the Center for Biomediated and Bioinspired Geotechnics (“They look to nature to inspire our understanding of Earth as an engineering system,” Saenz said).

Saenz facilitated a National Science Foundation initiative by composing principles of engagement that require the centers to pay attention to diversity and inclusion. How do they bring in more underrepresented students or those with disabilities? How do you continue to encourage women in STEM disciplines?

“We created a space for them to feel comfortable, to feel they can speak up,” Saenz said, “and position them so, when they graduate, they can go into industry or academia or government and be effective leaders – not only from a scientific perspective but a human perspective.”

“Not many people have the depth of knowledge and breadth of experience that Delia brings to UC Merced,” said psychology Professor Linda Luecken, the college’s vice dean of faculty. “Her background as a social psychologist gives her a unique theoretical and practical framework from which to approach reaching the goals of diversity, equity, and inclusion.

“I have known her for over 20 years and have come to rely on her sound advice and generosity of spirit.”

Another former Arizona State colleague said Saenz worked to incorporate goals of diversity, inclusion and community service into academic advancement. “We had a multitude of accomplishments, thanks to Delia’s leadership,” said Lisa Magaña, a political scientist and longtime friend who has assumed Saenz’s last role with the College of Liberal Arts & Sciences (“I keep saying I have big shoes to fill.”)

Saenz said she has researched everything from culture to social identity, from group effectiveness to how it feels to be a minority. But she has never been one to simply collect data and publish in journals. She wants to see how she can take what she learned and make it matter in the real world. That is what she wants to do at UC Merced.

“I cannot separate my academic self from my applied self,” she said, “but the blending is so beautiful.”

So the journey continues for this native Texan, the fifth of seven children, a Chicana who has hiked down and up the Grand Canyon, swam in the Dead Sea and expects to enjoy a Sierra hike or two. As she learned during that drive last February, the Valley might be new to her, but it strikes familiar notes of home.

“The agriculture, it beats a little differently here but … you can feel the energy,” Saenz said. “And seeing the almond trees were in full bloom – it was spectacular.”