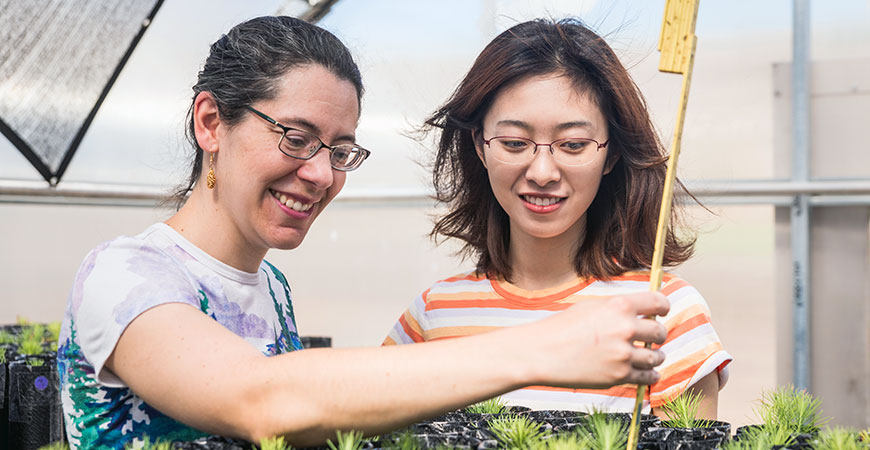 Professor Emily Moran, left, with a grad student in one of the campus research greenhouses.

If tree growth and seed production can’t compensate for the impacts of climate change, California’s trees will face difficulty filling in gaps left by wildfire and reaching areas that are becoming climatically suitable, studies now show.

Western trees tend to produce more seed and seedlings in the northward parts of their geographic ranges, said UC Merced Professor Emily Moran, with the Department of Life and Environmental Sciences, but this doesn’t mean they will be fully able to keep pace with climate change.

“These northward shifts could mean a lack of replacement of older trees by younger ones in places such as Southern California. Also, we aren’t seeing the same increases in seed production as in the East,” she said.

Moran and her research team at UC Merced have 11 field sites in the Sierra Nevada where they monitor tree growth and death, seed production (masting), and seedling growth and survival.

Looking at 1-3 acre sites can be good for identifying how a local forest is being impacted by environmental change. But drawing broader-scale conclusions from local-scale measurements can be tricky.

Moran joined a collaborative of forest ecology labs to scale up researchers’ understanding and ability to monitor changes in forests. The collaboration was begun by Moran’s former Ph.D. advisor Jim Clark at Duke University to try and answer questions about climate impacts at a larger spatial scale. Moran and colleagues at the U.S. Geologic Survey are sharing their California data.

“How much seed trees are producing is important in several ways. First, more seed means more chances of long-distance seed movement, which means more chances for trees to establish in gaps, such as the large fire scars being generated by large-scale wildfires in California, or in areas that are newly becoming warm enough for that species to grow,” Moran explained. “Second, more pollen and seed can mean more genetic variation between seedlings, and more chance for natural selection to help local populations adapt to changing conditions —something our lab is really interested in. Third, seed is also a food resource for animals, such as mice, squirrels, birds and wild pigs, and can affect their population dynamics.”

However, it's difficult to count the number of seeds in any given field site by direct observation, because seeds are small — for most species, they can’t be seen clearly in the tree canopy even with binoculars. Instead, researchers catch seeds in baskets or boxes and use mathematical models that account for where adult trees and the seed traps are located to figure out how many seeds trees produce and how far they move.

Clark’s lab built a framework called Mast Inference and Prediction, or MASTIF, to take in and analyze data from many different research sites, including those run by individual scientists and larger networks such as the National Ecological Observatory Network (NEON), as well as citizen science data entered into apps such as iNaturalist, and continental-scale climate data.

The first analysis teased apart two different ways climate can affect seed production in trees: direct effects on reproductive structures — late frosts damaging flowers, or warm and dry conditions favoring pollen traveling on the wind, for example — and indirect effects, such as climate affecting tree growth, and tree size then influencing how much seed each can produce. The results are detailed in a paper in Nature Communications.

In a second study, “We found that there is an East/West divide,” Moran said. “Eastern forests, which were largely cut down by European settlers and have been re-growing since the early 1900s, are full of small, young trees. When warmer climate conditions favor more rapid growth of these small trees, their seed production increases.”

In the West, more large trees — more than 150 years old — remain; if such large trees grow more, they more rapidly reach the sizes where seed production plateaus or starts to decline. That means the negative direct effects of climate changes in moisture and spring minimum temperatures on western tree seed production dominate, reducing seed production in Western forests. The study was just published in the journal Proceedings of the National Academy of Sciences.

Going forward, Moran, Clark and others are developing a proposal to expand this project to compare seed and seedling dynamics to observations of animals taken with camera traps and citizen science observations. The aim is to look at how variation in seed production may affect animal abundance and vice versa. Moran said the project, if funded, would give one UC Merced graduate student and at least six undergraduates a chance to participate in the field work and analyses.