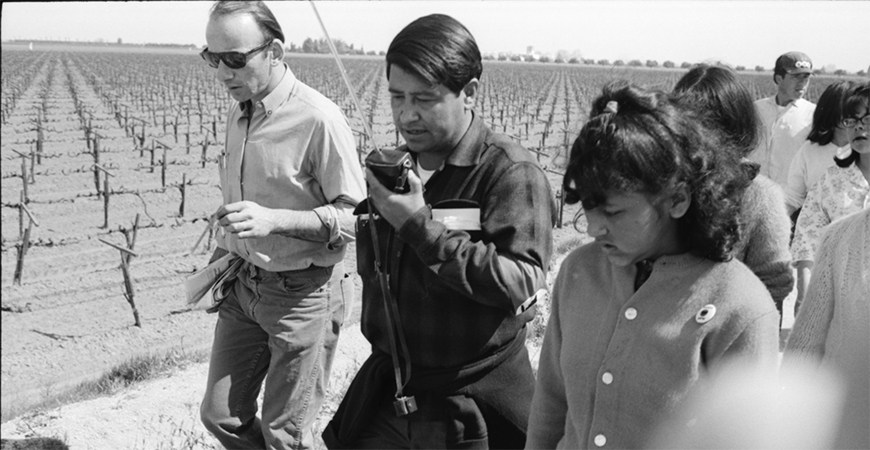 Cesar Chavez during the march from Delano to Sacramento in 1966.

The collection — which is available for free, public consumption through the UC Merced Library — includes a rich collection of images of the Central Valley. The collection comprises more than 2,700 digital images and roughly 5,000 additional film negatives, shedding light on the communities migrant workers built and lived in.

The collection includes photographs from Delano to Sacramento, where the United Farm Workers organized marches, featuring Chavez along with prominent activists Larry Itliong and Dolores Huerta. Chavez and Huerta co-founded the National Farm Workers Association. The photos show the raw reality of farm laborers and their families during these tumultuous times.

Lowe studied photography in the late 1950s with the noted social documentarian John Collier Jr. His other models were the classic images of Dorothea Lange, Walker Evans, and other Farm Security Administration photographers. In 1959, Lowe joined the staff of Pacifica radio station KPFA and almost immediately began documenting the lives of migrant farmworkers. Alongside his more dramatic scenes are images depicting the familial and community lives of these farmworkers.

Viewers are drawn into the worlds these laborers built for themselves as they worked tirelessly in the fields or struggled with the disappearance of jobs as a result of the mechanization of agriculture.

The Library partnered with the Center for the Humanities to acquire the collection.

“As a research institution, it is vital that UC Merced document, collect and display local history in order to aid communities, students and researchers in telling the story of the Valley,” Center for the Humanities Director and Professor Mario Sifuentez told UC Merced in December when the collection was announced.

Those interested in viewing the collection can do so here.