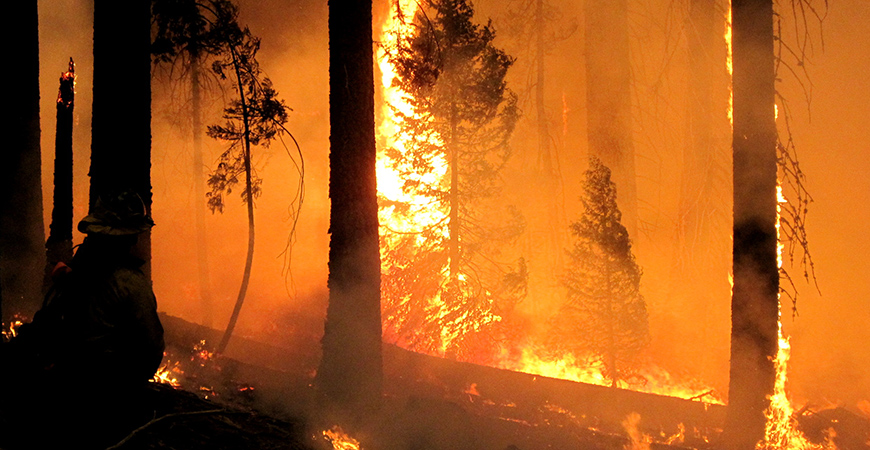 The new film “Beyond the Brink: California’s Watershed” highlights the critical need to reverse a century of fire suppression in Sierra Nevada forests, which, together with a warming climate, has resulted in a crisis situation.

Professors Martha Conklin, Roger Bales and LeRoy Westerling discuss these challenges and highlight how solving these multi-billion-dollar problems requires a whole-watershed approach. That means bringing together the needs of headwater land managers with downstream interests dependent on water from the Sierra Nevada to produce food and sustain urban economies.

“These mega-wildfires we’re now experiencing are a large source of carbon dioxide to the atmosphere, thus contributing to climate warming,” said Westerling, who is part of the Management of Complex Systems faculty. “Through fuels management, we can preserve California wildlands’ role as net sinks for carbon, rather than sources.”

UC Merced recently teamed up with researchers at UC Irvine and other campuses to form an Innovation Center for Ecosystem Climate Solutions, specifically to work with state and local agencies to advance the pace and scale of forest restoration.

“One real limit on increasing the pace and scale of forest restoration is getting land managers and those who benefit from restoration together to collaboratively develop implementation and financing pathways,” Conklin said. “University researchers are important contributors to that relationship.”

“It's part of our responsibility as UC researchers to connect the issues that we address in our research with the public, whose understanding and support are central to turning research products into climate solutions,” said Bales, director of the Sierra Nevada Research Institute. “Building broader understanding of the water and climate implications of wildfire and forest management are central to the broader mission of the solutions-focused research of our Innovation Center.”

The new film, produced by the nonprofit Chronicles Group, is a follow up to its 2017 film “Beyond the Brink,” which also featured UC faculty members and showcases the interconnectedness of water, food scarcity, climate change and national security.

A short preview of the film is available on Vimeo.

Many faculty members are experts in their fields, pioneering new ways to think about complex subject matter. But how does one communicate that research in...

‘Home for the Holidays’ Gift-Drive Brings Joy to Local Children

UC Merced helps local families each year through the 'A Home for the Holidays' campaign. Participants select a wish list from a local family and then turn in the gift-wrapped items, which are...

Laura Rodriguez-Mascorro joins UC Merced as its first emergency manager. Her role is focused on coordinating the various moving parts involved in making sure the campus is ready to deal with a wide...