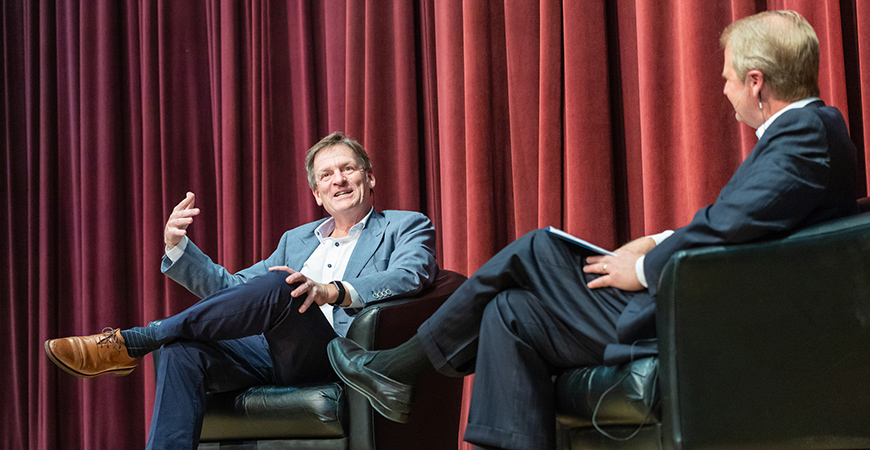 Before a packed crowd at the Dr. Lakireddy Auditorium, bestselling author Michael Lewis conversed with interim Chancellor Nathan Brostrom about the future of financial markets, the Oakland A’s, college athletics and the housing bubble, in the Jan. 31 installment of the Chancellor’s Speaker Series.

Lewis, who wrote “Moneyball,” “The Blind Side” and “The Big Short” — all of which became Academy Award-nominated films — fielded questions from Brostrom and the audience. His latest venture, a podcast called Against the Rules, which will feature UC Merced in its new season, launches in May.

Lewis kicked off the night by detailing his research process during “Moneyball,” when he initially set out to see if a class warfare of sorts existed in baseball between cash-strapped teams like the Oakland A’s and those that spend whatever it takes to get the best players, like the New York Yankees. As Lewis spoke with players and management in the organization, he soon realized the story wasn’t the sum the players were being paid, but the way they were valued. He noticed a systematic bias in baseball that valued athletes who looked the part — fit, fast, strong and handsome — over less athletic-looking players, while undervaluing things like pitch selection and the ability to get on base. 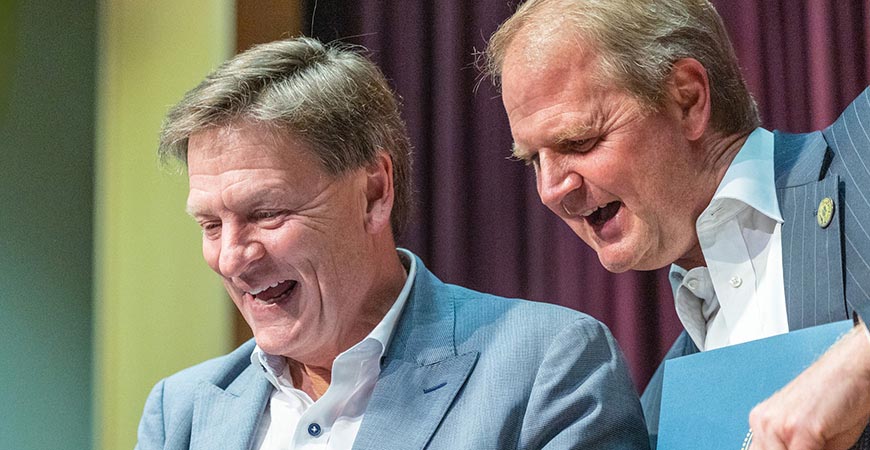 Lewis also shared stories of his long friendship with Brostrom.

Lewis likened the University of California to the Moneyball A’s, as it goes toe-to-toe against the wealthy — Harvard, Stanford and other large private universities — holding its own despite limited means. He also credited UC Merced for its impact on the lives of first-generation and underrepresented students.

“This is a society-changing institution,” Lewis said, generating perhaps the loudest applause of the night. “And it’s just getting going.”

The audience included students, faculty, staff, trustees, university boosters, area residents and U.S. Rep. Jim Costa, who asked Lewis what he thought of California’s new law allowing college athletes to profit from commercial use of their likenesses. The author pronounced himself fully in support.

“The NCAA looks like a machine for chewing up the value of disadvantaged kids,” Lewis said, noting student athletes now have a way to share in the profits, as other states follow California’s lead so as not to lose a recruiting advantage. “You can see the crack in the system starting to open up.”

UC Merced is a society-changing institution, and it’s just getting going.

To a student’s question about what to study in college, Lewis acknowledged that college can be challenging and that holding too tightly to a predetermined professional path can lead to frustration.

“Don’t walk away,” he said. “Give yourself a minute to think about who you are, rather than let the market determine who you are. … And try to be more than one thing.”

Lewis and Brostrom joined members of the Yosemite Leadership Program on a hike in Yosemite National Park on Saturday morning.