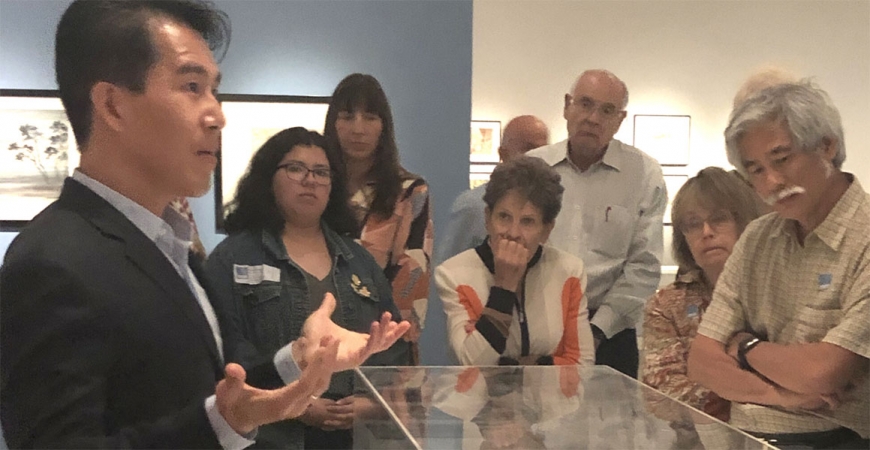 The Smithsonian National Portrait Gallery has announced that UC Merced Art History Professor ShiPu Wang has joined the museum’s Board of Commissioners for a four-year term. His appointment was approved by the Smithsonian Institution Board of Regents in August.

The National Portrait Gallery commission was established in 1962 as an advisory board for the museum. Currently, 29 commissioners meet biannually to promote and strengthen the museum’s mission to collect portraits of people who have had significant impact on the history, development and culture of the people of the United States.

Wang’s research focuses on rediscovering and examining pre-WWII American art and visual culture produced by diasporic artists of Asian descent, and he brings to the commission a scholarly voice that calls attention to broader, more diverse representations of American history.

“Through ShiPu’s work, remarkable artists, who have remained previously under-represented, have been pushed into the spotlight,” said Jeff Gilger, dean of the School of Social, Sciences, Humanities and Arts. “UC Merced is very excited about his appointment as it shows the importance of ShiPu’s scholarship on a national level.”

Currently serving on the editorial board of one of the top journals in art history, Smithsonian American Art Museum's "American Art," Wang’s work has reintroduced previously overlooked artists to larger audiences. For instance, he curated an international traveling exhibition that culminated with a showing at the Smithsonian American Art Museum. The exhibition, seen by more than 500,000 visitors, highlighted the work of artist Chiura Obata who was a UC Berkeley art professor for 32 years and was one of the most significant American artists of Japanese descent working on the West Coast in the last century.

Wang, who joined UC Merced in 2006 and is the Coats Endowed Chair in the Arts, has received critcal acclaim for his publications, such as his second book, “The Other American Moderns: Matsura, Ishigaki, Noda, Hayakawa” (Penn State University Press, 2017), which won the Georgia O'Keeffe Museum 2018 Book Prize.

“I am looking forward to contributing to a national institution that is striving to represent this country’s many voices and stories through portraiture,” Wang said.

On Sept. 15, Wang will give a virtual lecture that kicks off the National Portrait Gallery’s 2020 Edgar P. Richardson Lecture Series hosted by PORTAL, the Portrait Gallery's Scholarly Center. Free registration is available here.

The National Portrait Gallery narrates the multi-faceted and ever-changing story of America through the individuals who have shaped its culture. They strive to provide a visitor experience that goes beyond the frame and includes visual arts, performing arts, and new media. The Portrait Gallery presents poets and presidents, visionaries and villains, actors and activists whose lives form our national identity.

The National Portrait Gallery is part of the Donald W. Reynolds Center for American Art and Portraiture at Eighth and F streets N.W., Washington, D.C.