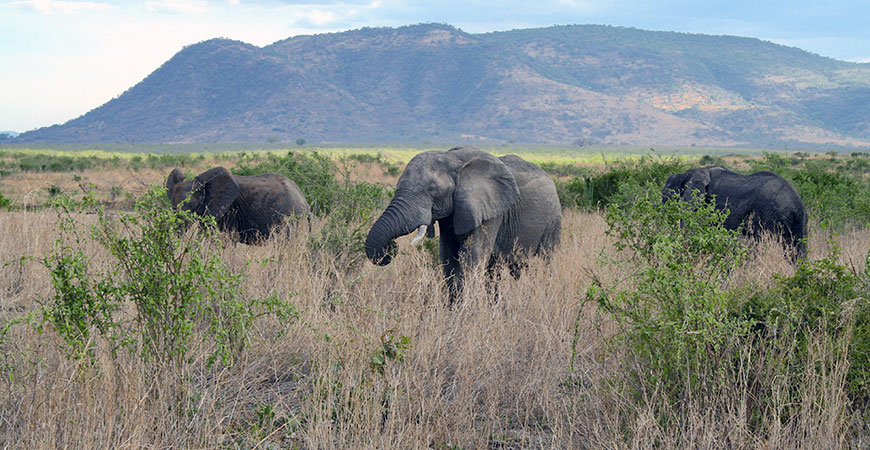 Elephants, like many other animals, are ecosystem engineers. Photo courtesy of Justin Yeakel

When people think of engineering in nature, they tend to think of species such as beavers — the tree-felling, dam-building rodents whose machinations can shape the landscape by creating lakes and changing the path of rivers.

But beavers are far from the only organisms to reshape their environment. A squirrel that inadvertently plants oak trees is also an “ecosystem engineer.” Roughly speaking, any organism whose impact on the environment outlasts its own lifetime is an environmental engineer.

Ecology Professor Justin Yeakel wanted to understand the direct and indirect dependencies between living organisms — biota — and the non-living chemical and physical parts of the environment that affect both the organisms and the functioning of ecosystems — abiota. He and some colleagues developed an ecological network model to explain it.

Yeakel was a postdoctorate Omidyar Fellow at the Santa Fe Institute in New Mexico when he started this research and is now a member of UC Merced’s Department of Life and Environmental Sciences. He and his colleagues recently published a paper in Nature Communications that models the long-term effect of ecosystem engineers.

Researchers have long considered the role of ecosystem engineers in natural histories, but this study is among the first to quantitatively assess them in an ecological network model.

“We wanted to understand how food webs and interaction networks were established from a mechanistic perspective,” he said. “To do that, you have to include things like engineering because species influence their environment, and there's this feedback between the environment to the species.”

“Some of the most important moments in the history of life have come about because organisms have changed their environments, leaving legacies that future organisms must contend with."

“As you increase the number of engineers, that also increases the redundancy of the engineers and this tends to stabilize the system,” Yeakel said.

How do you create an ecological network model? Yeakel said it’s highly abstract — there are no specific species, such as beavers, or concrete environmental features, such as rivers. Everything is reduced to interactions: Species can eat, need or make. In this sense, nature becomes a network of interactions.

The researchers gave the model a small set of rules, the main one being that the species have to eat only one thing to survive but they have to obtain all of the things they need. For example, bees eat nectar from flowers; flowers need bees to be pollinated; trees make shade that flowers need. Even if one flower species goes extinct, bees could survive on nectar from other flowers. But if either bees or trees fail to provide pollination or shade, which flowers need, the flowers will go extinct.

Using these rules, the models produce ecological networks similar to those in the real world, with a characteristic hourglass shape in species diversity — more diversity at the top and the bottom of the web, less in the middle.

To expand the model for future research, Yeakel plans on incorporating evolutionary dynamics so that species can change what they eat and need and make.

“Some of the most important moments in the history of life have come about because organisms have changed their environments, leaving legacies that future organisms must contend with,” Yeakel said. Two and a half billion years before humans arrived on the scene, cyanobacteria were a planetary-scale engineer that slowly changed the composition of the entire atmosphere by oxygenating it. “I would say that is one of those moments, because it set the conditions for much of the future of life on our planet.

“Those species more able to survive and reproduce in an increasingly oxygen-rich environment were selected for. Because it happened slowly, species had a chance to evolve.”

But humans, he said, have made planetary-scale changes in a very short amount of time.

“We're making changes on ecological timescales rather than evolutionary timescales,” Yeakel said. “What is the effect of that? Is an organism that becomes a planetary-scale engineer doomed to extinction if it changes the environment too quickly?”