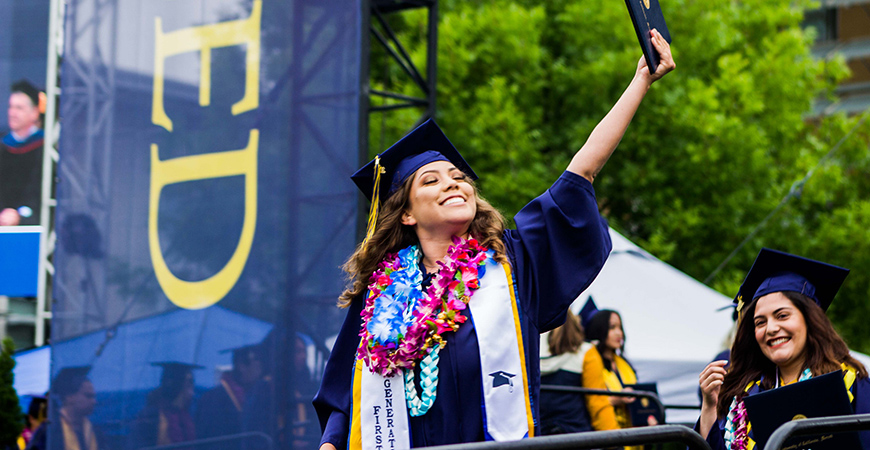 UC Merced has risen 61 spots in the overall U.S. News and World Report Best Colleges rankings in the past two years.

The University of California Merced, jumped 32 spots in the ranking of National Universities in the 2020 edition of the guide, released today. UC Merced made the biggest leap of any university, moving from No. 136 to No. 104 overall and from No. 67 to No. 44 among public universities. The university has risen 61 places in the overall ranking in the past two years.

UC Merced continues to be recognized for the transformative educational experience it provides to students. The university is ranked No. 1 in the nation for student outcomes, including No. 1 in outperforming expected graduation rates, No. 7 overall for social mobility, No. 1 in the nation for the percentage of students receiving need-based aid, and No. 13 among public universities for best undergraduate teaching.

“UC Merced’s outstanding rankings in areas of social mobility and academic excellence showcase the commitment our campus has made to ensuring our students succeed in their pursuit of higher education,” Interim Chancellor Nathan Brostrom said. “Our dedicated faculty and staff are providing world-class teaching, innovative research opportunities and robust support programs to help students transform their lives and create a better future for their families and communities.”

UC Merced debuted at No. 77 on the list of Most Innovative universities, and its undergraduate engineering program ranked No. 104 among publics and No. 153 overall in its third year in the U.S. News rankings.

The university also made a big leap in alumni giving rate, moving from No. 44 to No. 27 among public universities. The average age of UC Merced alumni is just 27 years old, considerably younger than most universities on the list, and most are early in their careers. But the university has already had a dozen graduates commit to establishing endowed scholarships through $10,000 pledges.

“Our alumni understand UC Merced’s mission inherently, and to see them give back so soon after graduation is inspiring and speaks volumes about the culture of this university,” Executive Director of Alumni Relations Chris Abrescy (’09) said. “Almost all of our graduates received some sort of assistance along their journeys, and they are eager to give back. We are thankful for their continued support of future generations of Bobcats.”

The U.S. News and World Report rankings round out an impressive summer of accolades for UC Merced. Last month, the university moved into the top 10 in the nation for the performance of first-generation students, according to Washington Monthly’s 2019 College Guide and Rankings.

Last week, UC Merced came in at No. 6 on the Sierra Club’s Cool Schools rankings, a jump of 44 spots from the previous high of No. 50 in 2017. The Sierra Club ranked a record 282 schools across the United States and Canada for their 13th annual listing of the greenest colleges and universities.

UC Merced was also recently recognized by the Association for the Advancement of Sustainability in Higher Education (AASHE) for its sustainable buildings and sustainability research.

In June, the university was ranked No. 4 among U.S. universities in the Times Higher Education Young Universities Rankings, which ranks the best 351 universities in the world that are 50 years old and younger. In August, UC Merced debuted in The Princeton Review’s Best 385 Colleges guide.