Physicist Found His Path to the Future at UC Merced 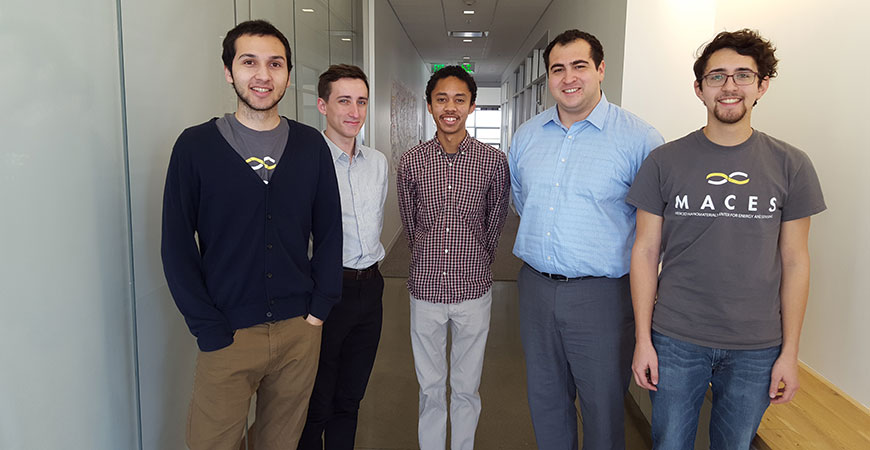 Denzal Martin, center, with some of his MACES classmates.

When Denzal Martin started his undergraduate work at UC Merced, he wasn’t thinking about a career in physics, interning with NASA or attending graduate school.

“It was a very obscure subject to me, but I was interested to learn more,” Martin (’18) said. “The pictures he showed — it seemed like magic how they were fabricating these materials.”

That lecture inspired him to change his major and the course of his life.

Martin said he wanted to get research experience, so he reached out to physics Professor Sayantani Ghosh , but didn’t really expect an answer.

“I had always assumed professors were hard to contact, or that they wouldn’t be open to someone who didn’t have a clear path in mind,” he said. “But she got right back to me and was more than happy to talk to me.”

Luckily, he got to be part of the first group of Merced nAnomaterials Center for Energy and Sensing (MACES) students, just as the NASA-supported center was launching in 2015. He worked closely with Ghosh, graduate students and other undergrads focusing on nanomaterials associated with solar cells. At the end of his first semester in MACES, he presented about the research he had been involved in, and center Director Professor Jennifer Lu recommended he apply for a NASA internship — with Park, the same scientist who had inspired him.

Ghosh emailed Martin not long after he applied, simply telling him “you’re going to NASA.”

He spent the following summer, 2016, in Langley, Va., working on the purification of boron nitride nanotubes to ensure proper testing.

“They asked me to help make an apparatus for the process, and I got to learn how to use a single scanning electron microscope,” Martin said. “That was all very new to me.”

The experience was as challenging as he expected, but he felt prepared to learn, grow and succeed because of the work and the people at UC Merced.

“It felt much easier than I had expected to get the experience I needed at UC Merced,” Martin said. “I am really thankful for how much the faculty and other students helped me.”

"It’s really important to be open to these experiences and to learning. It’s perfectly fine to ask for help, to admit you don’t know something and to try everything, even if you don’t always succeed. But don’t neglect your own contribution to learning, too — you can learn a lot for yourself.”

He spent a second year in MACES working on perovskites and zinc oxide nanowires, most commonly used in solar-cell technology, and a summer at the University of Colorado at Boulder, where he worked on another part of the solar-cell puzzle, gallium nitride nanowires.

“NASA was more a materials-science experience, and Colorado was more about fundamental physics research,” he said. “It also showed me the creativity you get to use in research.”

Now his interest in fundamental physics is focused on using lasers to levitate microparticles so he can study the effects of gravity at micron levels. It’s part of his Ph.D. work at Stanford University.

“Denzal is one of the brightest students I have had the pleasure of mentoring at UC Merced. Not only was he academically superb, he is motivated by genuine scientific curiosity,” Ghosh said. “His approach to research is so strongly based on his love of the subject matter, it is heartwarming. And despite all the amazing things he has already accomplished, I have rarely come across someone so humble about his achievements. I can’t wait to see what wonderful discoveries he will make.”

Now in his second year at Stanford, Martin, 23, anticipates another four years of school before he pursues a career. He looks back on his time at UC Merced and reflects on what he learned not just about physics, but about himself and success.

“It’s really important to be open to these experiences and to learning,” Martin said. “It’s perfectly fine to ask for help, to admit you don’t know something and to try everything, even if you don’t always succeed. But don’t neglect your own contribution to learning, too — you can learn a lot for yourself.”

He said he took the GRE twice, and advises students to start preparing for and taking the test early so they don’t face last-minute pressure and can re-take it if necessary. He also advises staying in regular contact with advisors and mentors as teachers and supporters, and because they can help students connect with internships and other opportunities that enhance learning.

Wanting to do well is a driving force for Martin, and he said his time as a Bobcat taught him to be more outgoing in pursuit of his goals.

“Sometimes you have to expose yourself to situations you thought you might not be good at, or that would be uncomfortable, and you will discover that are better at them than you thought,” he said. “You just have to keep at it every day.”