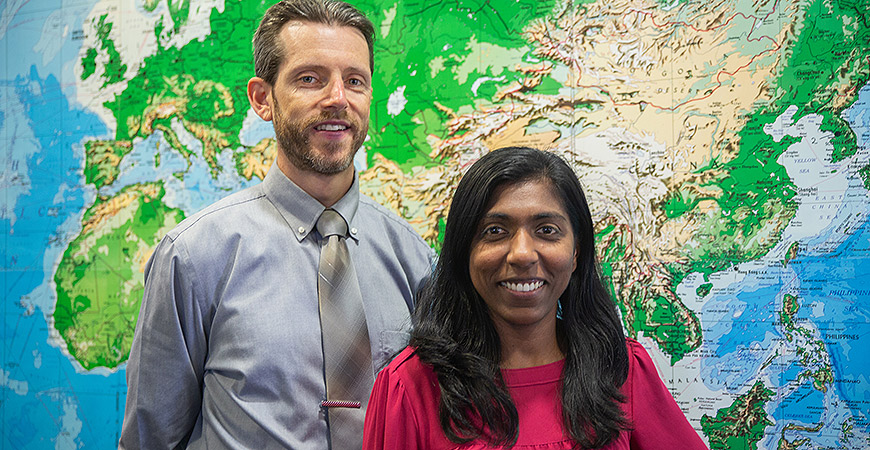 Craig Harmelin and Suki Spencer are among the first staff members on campus to receive Fulbright awards.

Earlier this spring, Spencer traveled to Washington, D.C. for several days of intensive training in various aspects of the Fulbright program. Harmelin heads to South Korea in June.

“This training comes at the perfect time,” Spencer said, because interest in Fulbright awards has been building on campus as the first two Fulbright Student Award winners were recently announced. In addition, UC Merced is part of the systemwide discussion focused on increasing the percentage of undergraduates who participate in study, research and service-learning abroad. The “Getting to 30%” effort would double the percentage of UC undergraduates who travel abroad within five years.

“Craig and Suki’s participation in the Fulbright programs not only serves to recognize their accomplishments within international education, it will also build relationships and expertise that promise to advance UC Merced’s international initiatives,” said Garett Gietzen, director of the Office of International Affairs.

In part, he said Harmelin’s experience in South Korea should create, strengthen and foster connections with universities there and help the campus office better serve domestic and international students. Spencer’s experience should improve the office’s ability to advise students on the Fulbright and other U.S. Department of State grants.

Administered by the federal government, the 72-year-old Fulbright program cultivates mutual understanding between Americans and other countries through international educational exchange programs. In addition to student scholarships, the program offers awards for research, training and other opportunities to college faculty members, administrators and advisers.

Craig and Suki’s participation in the Fulbright programs not only serves to recognize their accomplishments within international education, it will also build relationships and expertise that promise to advance UC Merced’s international initiatives.

Garett Gietzen
Director of the Office of International Affairs

Harmelin, a 10-year veteran of UC Merced, said he was delighted to receive the Fulbright in his first application for a grant. He is one of eight professionals who will travel to South Korea this summer to focus on building and improving relationships and connections between that country and the U.S.

South Korea is one of the top travel choices for UC Merced students. In 2016-17, 20 of the 129 students who studied abroad went to South Korea. Yonsei University in Seoul is one of the university’s most prominent partners in the region.

Harmelin will spend a week in Seoul to meet with higher education representatives and others to learn more about the higher education system within the context of Korean culture. In his second week, he’ll leave the capital city to explore institutions in other areas.

“I’m hoping to leverage the award in a few different ways,” he said, such as expanding study abroad opportunities in the region.

Throughout the trip, Harmelin also plans to build name recognition for UC Merced and promote the campus to attract more international students. He’ll work to revitalize some existing relationships and create new partnerships within the country.

Spencer’s award provides hands-on training for advisers to improve student participation levels at campuses committed to the Fulbright program. After a round of training this spring, she heads to New York in the fall to observe a Fulbright national screening committee meeting and meet with Department of State officials who help run the program.

Watching the screening session should offer valuable insight into how applications are evaluated and how grants are awarded. Spencer, who has worked in her role since 2014, said more students are interested in the Fulbright program and in studying abroad.

“We’re hoping to keep the momentum going and keep increasing our numbers,” she said.

Her outreach efforts on campus include information sessions and asking faculty members to recommend students for Fulbright applications. She also hopes to remain connected to students who have traveled to other countries.

“With any study abroad experience, students come back saying they have had a transformative experience,” Spencer said.