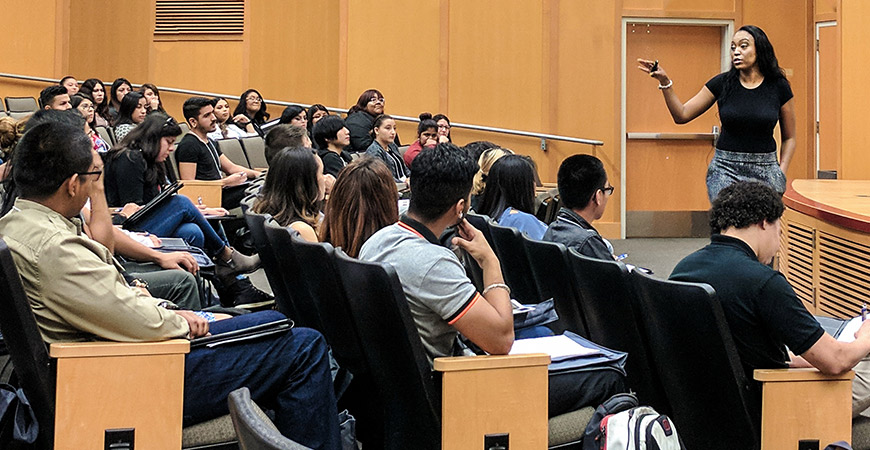 Twitter's Trier-Lynn Bryant speaks to first-generation students about what makes them unique in today's workplace.

Starting and navigating the career-planning process can be daunting for any college student, but especially for those who will be the first in their families to graduate from college.

“Our goal with the conference is to get students thinking about what comes next,” Vice Provost and Dean for Undergraduate Education Elizabeth Whitt said. “The pathways for success need to be perfectly clear, especially for students who come here not well-versed on how to be a college student.”

Because 72 percent of UC Merced’s undergraduate students are first-generation, developing programs that connect students to existing career resources is crucial to improving their success.

“We can’t think of student success as their job; it’s our job,” Whitt said. “They have a lot of work to do, but we have to create the opportunities.” 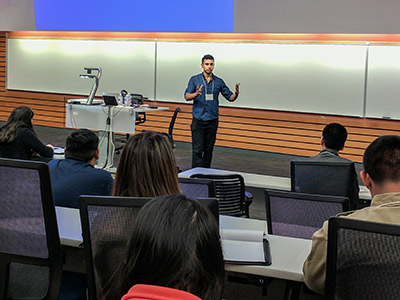 She first visited UC Merced last fall for a Twitter recruitment event at which she hosted club and organization leaders for a diversity and inclusion networking dinner.

The diversity theme was prominent during her conference keynote as well. Bryant described experiences from her time in the military, as a finance officer on Wall Street and in her current role in the tech world. She encouraged the students to use their diversity to their advantage.

“Something I learned in the Air Force that has been very impactful for me is: Different equals diversity, and that’s leverage,” she said. “As a first-generation college student, you have a different experience and you’re going to look at things differently.”

Professional services recruiters with Aerotek, one of the largest staffing and recruiting company in the U.S., led workshops on interviewing and resume building. Jess Smith shared tips for students to transform their resume into a powerful tool that will get interviews. Ludieliz Silaya shared the best strategies to have a flawless interview.

A highlight for many students was a workshop led by UC Merced alumnus William Torrez on how to leverage LinkedIn to network with recruiters.

Torrez, who is from California’s Inland Empire and graduated in 2014 with a degree in cognitive science, has worked for several companies in different industries and has gained significant job search experience. Now, he leads university recruitment for Procore Technologies, a global construction software company.

During his first couple of years at UC Merced, Torrez worked the 6 a.m. shift at the Lantern Café. He didn’t start thinking about his career aspirations until he worked as a student assistant in the Students First Center and served as director of Communications and Public Affairs for the Associated Students at UC Merced.

He recalled the time he asked Vice Chancellor for Student Affairs Charles Nies for advice about whether to study abroad or intern at PG&E the following semester.

During his workshop, Torrez provided tips on how to connect with recruiters and emphasized the need for networking.

“Each time you apply for a job, immediately connect with the hiring manager through LinkedIn,” Torrez said. “Referrals are key. Ask your first connections to make introductions and then follow up with them through a LinkedIn direct message.”

Leslie Renteria Salome, a third-year sociology major from the San Diego area, hoped to meet other students with similar experiences, but she gained much more from the conference.

“I was reminded of the importance of developing not only as a student, but also as a leader,” she said. “I was aware that I had to expand my network and prepare for interviews; however, I had not seen the resources available until the conference.”

After the conference, Renteria Salome immediately set up an appointment and met with a career specialist to discuss applying for graduate school to study urban planning.

The First Generation Career Conference was made possible by funds from the University of California Office of the President that were allocated to the campus for recruitment and retention efforts. UC Merced hopes to find funding to make it an annual event to continue to support first-generation students as they navigate the college experience and transition to post-graduation career or continuing education goals.