By Brenda Ortiz, University Communications
May 18, 2017 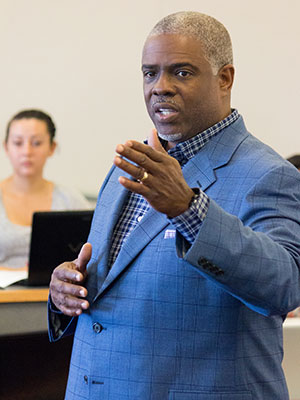 Mark T. Harris, J.D., has been appointed to the California Fair Employment and Housing Council by Gov. Jerry Brown.

Harris is a continuing lecturer of management and business economics at UC Merced since 2008 and a practicing attorney in Sacramento.

From 1999 to 2001, Harris served as undersecretary for the California Business, Transportation and Housing Agency under former Gov. Gray Davis. Under his newest appointment by Gov. Brown, he will focus his efforts on promoting employment and housing anti-discrimination laws.

“It is a high honor to serve the governor and the people of the State of California for the second time in my career,” Harris said. “It is greatly gratifying to continue the fight for social justice for the underserved, particularly in the Central Valley who are largely among California's most forgotten residents when it comes to fair treatment in employment and housing.”

Harris served as chief deputy at the Alameda County Treasurer and Tax Collector’s Office from 1985 to 1988 and was a member of the Sacramento County Planning Commission from 1988 to 1994. He was deputy chief of staff at the U.S. Department of Commerce from 1990 to 1992.