The federal Defense Advanced Research Projects Agency (DARPA) recognized this year’s team of UC Merced engineering students for its design of a device that cools high-powered electronics aboard military aircraft.

In the yearlong Field-Reversible Thermal Conductor (RevCon) Challenge, hosted by DARPA and the Office of Naval Research (ONR), the team of juniors and seniors took second place overall and won first-place honors for having the most comprehensive analysis.

Led by Professor Yanbao Ma, the eight-member Team TEC — which stands for thermally efficient connector — worked on a challenge to develop novel field-reversible, low-resistance thermal connectors that improve on the design now being used. 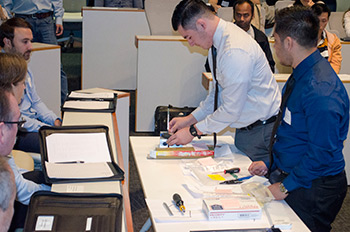 Last year’s version of Team TEC won first place in the capstone design competition at UC Merced, and the team’s work earned them recognition in the first phase of RevCon, which invites teams from all over the world to participate. This year’s team built on last year’s successes but took the work to the next level, building working prototypes.

While many RevCon teams outsourced the manufacturing of their prototypes, the UC Merced students leaned on the campus’s Machine Shop and its director, Ed Silva.

“Professionals told us we were crazy to try to manufacture our design with such tight specifications,” team captain Jonathan Madueno said. “But Ed helped us do it.”

The students put in 80-hour work weeks building prototypes, conducting extensive tests and writing lengthy reports to support their design, all of which was good experience, Madueno said.

The thermal connectors are ubiquitous and critical components in military electronic modules, where they transfer heat from the edge of a printed circuit board to the water- or air-cooled wall of an electronic module, according to DARPA’s website. High-powered electronics produce a lot of heat and wear out quickly, leading to expensive and potentially dangerous equipment failure.

Team TEC was among the final seven teams that went to the University of Missouri, Columbia, for onsite testing and judging, and to meet with government and industry experts who provided feedback on the designs. Judges included representatives from Lockheed-Martin, Raytheon, Rockwell and BAE Systems.

“They liked how we validated our work by showing every single aspect of our design’s calculations,” Madueno said. “We even knew how much torque was needed to tighten the screws.”

The students had opportunities to interact with the judges directly, as well as with job recruiters from the aerospace industry. Ma said having the DARPA competition on their resumes will greatly benefit the team members when it comes time to find jobs or apply for grad school.

“Also, the students present for UC Merced, so it helps spread the word about our university and helps us become better known,” Ma said. “This is a wonderful opportunity for them to make connections, gain experience and attract the interest that brings in resources for projects like this.”

He said if the competition is an option this year, he would like another team of students to have the same opportunity to learn from the experience and understand how to apply their theoretical knowledge.

“I think these projects motivate the students to learn more and work harder in labs, because they use the information they learn in class and the methods they learn in lab,” Ma said. “They are directly using what they’ve learned.”

Madueno, who expects to graduate in May, said he hopes there will be another RevCon team to take the project further and to show off the university.

“A lot of people were shocked to see us there, because our university is only 10 years old and we got to compete on an international stage like that,” Madueno said. “I think it speaks to the caliber of students UC Merced is producing.”