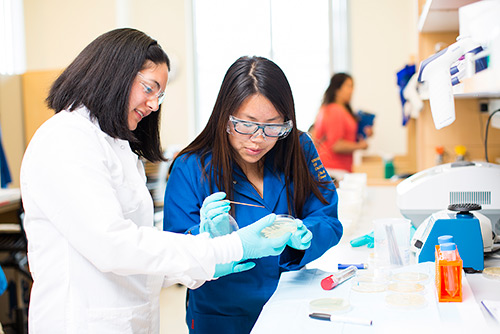 Biofilms — colonies of microorganisms living inside a protective coating — are everywhere, from the plaque we scrub off our teeth each day to the slimy green masses that form on rocks in streams. They are on the inside and outside of our bodies, in our oceans, and on natural and manmade surfaces, including medical implants such as artificial heart valves and catheters.

Biofilms aren’t always bad news, but when they are, they can cause extremely serious problems. Biofilm infections are impossible to treat or even to see when they are inside us — but UC Merced Professor Clarissa Nobile is working to change that.

Nobile studies Candida albicans (C. albicans), the fungus that forms the biofilms that cause yeast infections inside and on outer surfaces of the human body. In a new paper published in mBio, Nobile and her colleagues reveal they have found a way to “see” biofilms inside people using bioluminescent markers.

“C. albicans infections can be really dangerous,” said the professor, who’s with the School of Natural Sciences and the Health Sciences Research Institute. “They can form inside us on any mucosal surface, or on implanted medical devices like artificial heart valves, catheters or pacemakers. They are very drug-resistant, making it extremely difficult to get rid of a biofilm inside the body. Right now, we can treat the symptoms, but we can’t get rid of the biofilm unless we remove the medical device it has formed on.”

In the paper, “Global Identification of Biofilm-Specific Proteolysis in Candida albicans,” Nobile’s team shows that bioluminescent markers can detect two specific proteases — enzymes that cleave other proteins — that are always present in C. albicans when it is in the biofilm form.

The proteases have long scientific names; Nobile and her colleagues call them Sap5 and Sap6 for short. The researchers found that when Sap5 and Sap6 are removed or destroyed, a biofilm either will not form or will mis-form, preventing a recalcitrant infection.

While C. albicans, a species of fungus, is naturally part of the human microbial population, it’s also an opportunistic pathogen capable of causing mucosal and systemic infections, especially when the fungi disperse from their biofilm. One common example is sepsis, a serious and often deadly bloodstream infection. Yeast infections can get into the eyes or mouth, and sometimes babies are born with oral yeast infections, called thrush, from passing through their mother’s birth canals.

Nobile and her colleagues say in the new paper that their fluorescent biomarkers could help identify other related pathogens, as well.

Nobile is on the cutting edge of a fairly new field of research. Infections are often treated by targeting individual bacterial, fungal or viral pathogens, as if they act alone. But these microorganisms are part of complex microbial ecosystems that scientists are just beginning to understand. Nobile’s work studies infections from the ecosystem context, rather than the individual microbe.

She isn’t just on the lookout for these pathogens, though. Her lab at UC Merced works in collaboration with her company, Biosynesis Inc., which is optimizing a diagnostic kit that will make testing affordable, and developing treatments that will target proteins in a biofilm, like Sap5 and Sap6.

Biosynesis is based in the Bay Area and staffed mainly by researchers, but Nobile said she’d like to open a branch here in the Merced area, too.

The company is funded by a small-business award from the National Institutes of Health.

“It’s fun to work on the entrepreneurial side of this,” Nobile said. “This is a situation where the basic science translates into a real-world application.”

She joined the campus in 2014, but has been working on biofilm research since she was a graduate student. She earned her Ph.D. at Columbia University in 2007 and was a postdoctoral researcher at UC San Francisco before coming to UC Merced.