Picking Over the Past Provides Clues to the Future 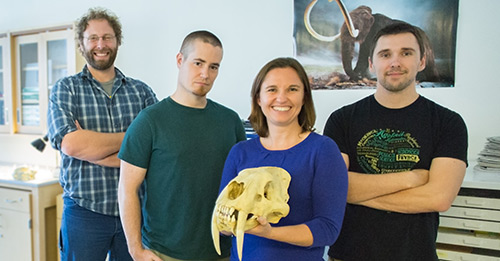 UC Merced professors Jessica Blois and Justin Yeakel and their graduate students are sifting through time, picking out tiny clues that will give them a mouse’s eye view of the ecosystem that surrounded what is now the La Brea Tar Pits in the middle of Los Angeles.

A deeper look into the past could also help better understand the future.

There’s a growing recognition of climate change threats, and many scientists make predictions about how plants and animals will fare. But those forecasts often rely on recent data or are based on climate or environmental variables alone. That leaves such predictions fairly uncertain.

“Given the range of environments each species experiences over its evolutionary history, modern data alone are likely inadequate for capturing the true relationships among species and environments,” Blois and her collaborators wrote in their grant proposal.

But there’s at least one high-resolution way to see what happened in the past.

“The tar pits are one of the most amazing records of past life on the planet,” Blois said. “Few deposits in the world contain such a record.”

Blois and Yeakel, both with the School of Natural Sciences, conduct research in ecology and Earth science — areas in which UC Merced is rapidly becoming renowned — and the project is another example of the interdisciplinary, practical training postdoctoral researchers, graduate students and undergraduates receive at UC Merced.

In 2006, as construction crews dug into the ground to construct an underground parking structure for the Los Angeles County Museum of Art, they found ancient asphalt “seeps” that had become fossilized. Instead of covering them up, they carefully dug around them and preserved them in large wooden crates, then took them to the Rancho La Brea complex for researchers to examine. 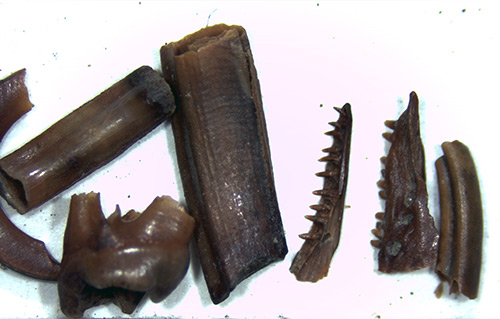 Through a $430,000 grant from the National Science Foundation (NSF) — with from Jacquelyn Gill with the University of Maine and Luis Chiappe, a scientist with the Los Angeles Natural History Museum — Blois and Yeakel and their graduate students Nate Fox and Taran Rallings, are helping figure out what’s inside the seeps. The goal is to model the food web and address one specific topic: How variable is community structure and how sensitive to extinction are individual species through time?

“We’re building tools to help figure out the interactions between members of the ecosystem, in part because we want to be able to better understand future diversity under the climate change we are facing,” Yeakel said. “We know which species went extinct during this period, so if we can better understand the ecosystem and make comparisons, we might be able to know which species now would be predisposed to extinction.”

He said there are a lot of questions that could be asked and answered based on the large amount of information stored in the fossilized seeps.

But first, the clues have to be extracted.

Some of the seeps are large and deep; others are smaller. But they all tell a story: An herbivore would get stuck in the sticky liquid and the predators and scavengers would come to feed and get trapped, too.

About 90 percent of the mammals excavated at Rancho La Brea are carnivores, including saber-toothed tigers, dire wolves and other ancient ancestors of dogs, cats and bears. And that’s where the majority of the research has been focused, too.

But the researchers are interested in the small mammals and plants that rounded out the ecosystem, like the shrews, moles, bats, rabbits and rodents, as well as the plants they ate.

The seeps are carefully opened and dissected. Everything is carefully washed to eliminate as much of the asphalt as possible. Scientists at the Tar Pits’ museum take the largest bones, and the UC Merced team gets silver canisters of the remaining matrix, which looks like pebbles.

They painstakingly pick through for bone and plant fragments, while Gill searches for miniscule pollen in her samples.

The three-year project will inform other scientists and the people working to preserve Rancho La Brea, but will also address other interests: student training in research, public outreach, citizen science and science education for younger students.

The research plan calls for public outreach and citizen science by sharing the information with the more than 500,000 people who visit the tar pits each year, offering docent and teacher training, summer camps and exhibits that the public can participate in.

The grant will support a postdoctoral researcher, three graduate students and several undergraduates at UC Merced and University of Maine, both of which have diverse student populations and many first-generation students. The students will be cross- trained in paleontological research methods, state-of-the-art food web modeling, and science education and communication.

The postdoc will help develop a student-based citizen science initiative and partner with schools in Maine and California to develop and field-test kits and supervise training of secondary school teachers in implementing the kits as part of the Common Core curriculum.