Researching oceanic oil spills can be difficult when you work at a landlocked university like UC Merced.

But thanks to a large consortium of researchers from around the country, that’s exactly what Professor Wei-Chun Chin is doing in the hopes of understanding the deeper, long-term effects of spills to better deal with them.

The School of Engineering professor, affiliated with the Health Sciences Research Institute, studies microfluidics and the application of polymer physics, microfabrication and engineering principles to biological systems, and has been studying organic particle settlement for many years.

His work drew him to the Aggregation and Degradation of Dispersants and Oil by Microbial Exopolymers (ADDOMEX) consortium, one of 12 selected by the Gulf of Mexico Research Initiative (GoMRI) to study the impacts of oil, dispersed oil and dispersants on the Gulf of Mexico ecosystem and public health.

After the Deepwater Horizon oil spill in 2010, which killed 11 people and is considered the largest marine oil spill in history, crews tried many methods to “clean up” the Gulf of Mexico. They vacuumed up the oil, sprayed thousands of gallons of detergent to disperse the oil and even burned it off.

Researchers found a proliferation of microbes that seemed to consume some of the oil, as well. Dinoflagella, bacteria and phytoplankton helped the Gulf appear cleaner, but even though oil is no longer visible, that doesn’t mean it’s gone, Chin said.

“We need to understand it, because this was a whole new experience for us,” Chin said. “I don’t want people — or oil companies — to take this lightly. The oil is gone from the surface, but we do not know the long-term consequences.” 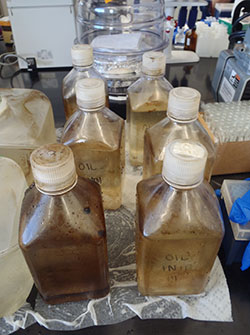 The Deepwater Horizon spill wasn’t unique. Significant spills have happened since, and likely will again.

Professor Antonietta Quigg of Texas A&M University at Galveston, the lead investigator for the group Chin is working with, said spills are an unfortunate reality of oil companies pushing deeper into new drilling frontiers.

“Microbes that enjoy hydrocarbons dine on the all-you-can-eat carbon buffet during a spill,” Quigg said, “and in essence, return the oil back to the bottom of the ocean. Our research is focused on understanding what those microbes are doing and how, which will help us understand the fate and transport of the oil in the oceans.”

The microfluids Chin uses in his lab allow for small-scale experiments on samples of ocean water the other researchers send to him. He looks at the effects of microbes on spills, the effects of dispersants on the microbes and microbial interactions.

GoMRI began in 2010, after the oil spill, and is funded by British Petroleum (BP) — the company responsible for the Deepwater Horizon event — for 10 years.

Each consortium is funded through 2017 and must include researchers from at least four universities. ADDOMEX is led by Texas A&M University at Galveston, which has a marine station at the Gulf where researchers can sample water for their work. Other members include Old Dominion University, UC Santa Barbara and the University of Southern California.

“Oil spills can happen anywhere. They can come from ships like the Exxon Valdez, or from drilling operations like Deepwater Horizon,” Chin said. “And it’s true that the oceans can clean themselves, but it takes a long time, and we do not want to abuse them.”