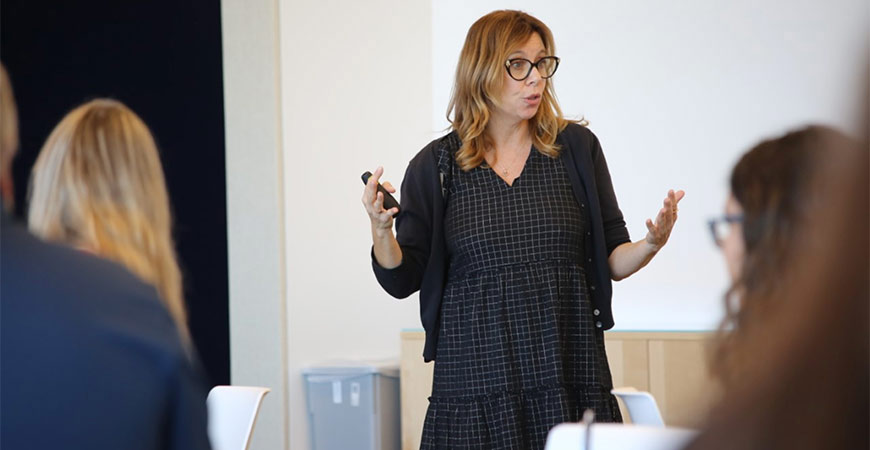 Jill S. Jacobs, an education strategist for the nonprofit Academic Engagement Network, led a discussion of the history of discrimination against people of the Jewish faith, culture or background.

Antisemitism is not a new form of discrimination; it dates back thousands of years. But recent events and the charged political climate in the United States have brought it to the forefront, an educator said during a workshop at UC Merced.

Jill S. Jacobs, an education strategist for the nonprofit Academic Engagement Network, led a discussion of the history of discrimination against people of the Jewish faith, culture or background. She was invited to campus by UC Merced’s Division of Equity, Justice & Inclusive Excellence.

“Antisemitism goes way back to pre-Christian Roman times,” she said. “In the pre-Christian polytheistic world, Jews stood out as monotheists (worshipping a single god).”With the rise of Christianity, there was a “sibling rivalry between religions.”

Throughout the years that followed, Jews were often faced with accusations of ritual murder and an association with the devil or evil forces.

“In the 19th century, these myths came to be associated with Jews whether they associated with or practiced Judaism,” Jacobs said. The idea of Jews as a race and the myths surrounding them culminated in the Holocaust, when 6 million Jews – or 2/3 of the world’s Jewish population of the time – were killed.

Today, there are 14.5 million Jews in the world. Of that number, 83% live in Israel and the United States. “The number is smaller than prior to the Holocaust,” Jacobs said. “Then it was estimated to be somewhere between 18 and 19 million.”

“Most people do not realize how small the number in Israel is,” he said. “And that the United States is so close in terms of population.”

According to Jacobs, 5.7 million Jewish people live in the U.S.

At the conclusion of the Holocaust, antisemitism continued to play out. Unlike other prejudices, it was spread across the political spectrum.

A continuing trope is that Jewish people are secretly in control and powerful. Because Jews are given both high and low status, “it makes antisemitism difficult to identify,” Jacobs said. “If you’re saying all Jews are powerful, then how could they be subject to discrimination or hatred?

“But it’s something that harms us all when these kinds of theories are shared and believed.”

That kind of message is particularly frightening when it comes from someone who commands a lot of attention, as was the case recently with singer Ye, formerly known as Kanye West.

West has been dropped by a number of his business partners, including Gap and Adidas as well as his own agent, for recent social media and interviews in which he attacked the “Jewish underground media mafia” and threatened to go “death con 3 On JEWISH People.”

Jacobs said that kind of hateful rhetoric is damaging from anybody, but even more appalling when it comes from someone as famous as West.

“There are more followers on Ye’s Instagram than Jewish people in the entire world,” Jacobs said. “It impacts people differently.”

Other attendees at the workshop included a Jewish student for whom UC Merced is his first public school experience, and a German woman who said her daughter was called a Nazi during a school presentation. “I wanted to learn how to respond,” she said.

The first way to respond for people who want to fight antisemitism is to be aware of it. Jacobs said it’s evident when people line up above the 405 Freeway in Southern California giving a Nazi salute is obvious. Less clear is someone who might say “You don’t look Jewish,” trying to give a friend a compliment.

These kinds of microaggressions are more common than many would think. At the same time, particularly on college campuses, it is hard to control antisemitism unless there is some kind of threat.

“Even racist and other prejudiced expressions are protected speech as long as there is not an immediate threat,” Jacobs said. “But the fact that our jurisprudence allows for such freedom of expression does not mean that this speech does not inflict injury to those so malevolently attacked.”

In 2021, the Anti-Defamation League reported 2,717 incidents of antisemitism, ranging from harassment to assaults. That was a 34% increase from the prior year, Jacobs said. And antisemitic incidents on college and university campuses are back up after a decrease in 2020, likely due to the shutdowns of the coronavirus pandemic.

The pandemic brought about another antisemitic claim: That Jews spread the virus in order to profit from the vaccines.

Though they are seen by some as powerful and in some areas benefit from White privilege, Jews aren’t always seen as White.

“When Jews are simply labeled as White, aspects of Jews as a separate cultural group can be erased,” Jacobs said. “And it ignores the experiences of Jews of color.”

And White nationalists do not consider Jews White. For those groups, Jacobs said, Jews are seen as a threat to “replace” the White majority in the United States. “Their White-looking skin is part of what makes them particularly dangerous.”

That’s one reason that fighting antisemitism is so important when addressing any kind of racism.

“Fighting antisemitism cuts off the driving force of White nationalism for the sake of all marginalized communities,” she said.