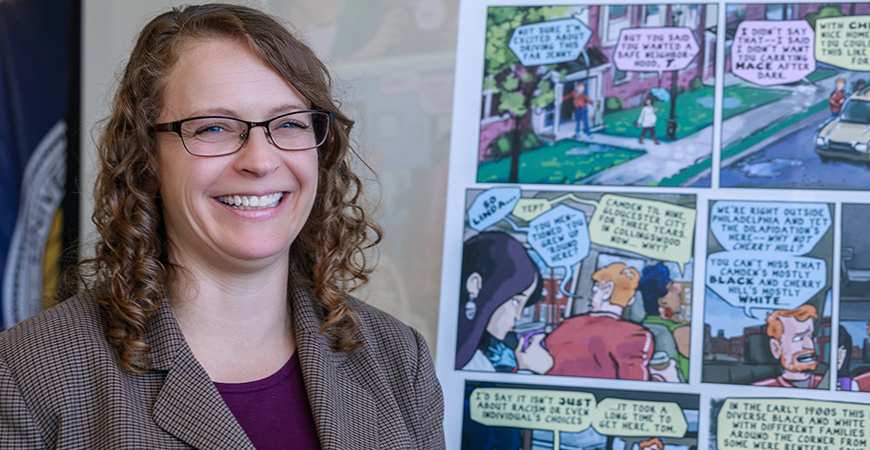 Professor Jessica Trounstine is one of 28 award recipients. Photo by Veronica Adrover.

The Carnegie Corporation of New York announced that Department of Political Science Chair and Professor Jessica Trounstine has been named to the 2022 Class of Andrew Carnegie Fellows.

Each of the program's 28 award recipients will receive a $200,000 stipend to devote their time to research and writing in the social sciences and humanities. This year's commitment totals $5.6 million in philanthropic support.

"I am honored to have been nominated by UC Merced for this award and grateful to have been selected by the Carnegie Foundation as a recipient," said Trounstine, who is the UC Merced Foundation Board of Trustees Presidential Chair. "The funds will support my work analyzing the political tools that race and class advantaged communities use to maintain their exclusivity and how, in turn, these divisions generate political polarization in local politics. Having a better understanding of the deep fault lines that have riven America's communities will help us achieve a more just and equitable future."

The fellowship will provide the foundation for Trounstine's new book "Redlined Forever: How Politics Shapes Neighborhoods and Neighborhoods Shape Politics." The first portion of the project will analyze how politics are used to shape the demography of neighborhoods using detailed geo-coded data on land use regulations and political representation in 101 cities in the San Francisco Bay Area. The second portion of the project will explore how neighborhood contexts shape political attitudes and divisions using survey data and newspaper archival data.

"Professor Trounstine is an asset to UC Merced, and we applaud her for the work she's done to inform on politics and inequalities in communities," said UC Merced Chancellor Juan Sánchez Muñoz. "The university is proud to have her named as an Andrew Carnegie Fellow and anxiously await her future research projects that will undoubtedly help educate people in the Central Valley and across the country."

"UC Merced is delighted to have Professor Trounstine join the growing list of scholars, journalists and authors who make up the Andrew Carnegie Fellows," said Gregg Camfield, executive vice chancellor and provost. "We look forward to her work and its findings as they pertain to the political tools that can affect the makeup of neighborhoods."

"Professor Trounstine is an internationally recognized scholar, well-respected teacher and leader on campus. This award recognizes her work and will provide her needed support for her research that will inform us further about political institutions and how they interact with different populations of citizens," said Jeffrey Gilger, dean of the School of Social Sciences, Humanities and Arts.

Founded in 2015, the Andrew Carnegie Fellows Program involves a competitive nomination and selection process. To date, the program has named 244 fellows, representing a philanthropic investment of $48.8 million. The program is a continuation of the mission of Carnegie Corporation of New York, founded by Andrew Carnegie in 1911, to promote the advancement and diffusion of knowledge and understanding.

As part of the nomination process, more than 600 individuals were invited to recommend up to two individuals for consideration. All proposals underwent an anonymous evaluation by leading authorities in the relevant fields. The top proposals were then forwarded to the jury for a final review and selection.

"In recent years, as we have looked to respond to our world's most complex problems, the Carnegie Fellows have provided important contributions through their exceptional research, pursuit of knowledge, and creative approaches," said John J. DeGioia, chair of the Andrew Carnegie Fellows Program jury and president of Georgetown University. "Our panel of jurors were gratified and inspired by the caliber of the research proposals. We believe that this year's fellows show extraordinary potential for lasting impact."

The award is for a period of up to two years, and while the anticipated result is generally a book or major study, the class of 2022 will also result in an art installation, software applications and digital platforms.