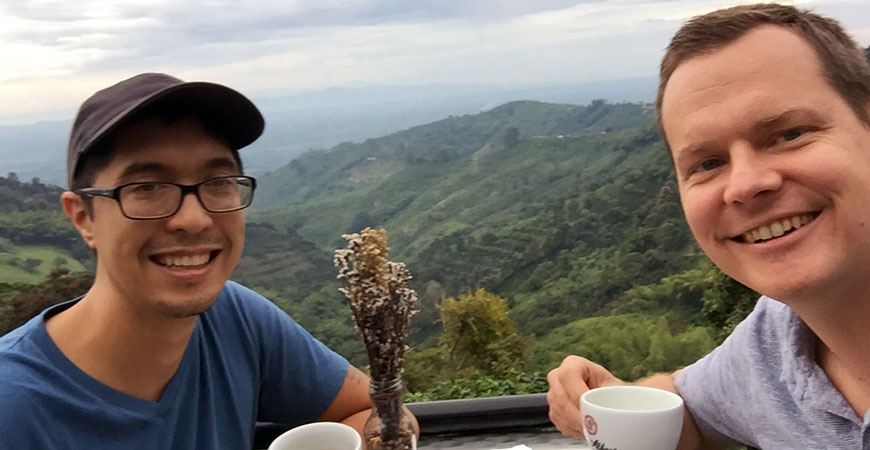 Creating vaccines to train the immune system against parasites is particularly challenging. They are also highly specialized masters of immune evasion.

Some parasites can secrete proteins that bind to immune cell molecules, manipulating them for their survival purposes. Some have complex and fast life cycles so by the time the immune system has learned to recognize one form, it has already shifted to another.

The Jensen lab at UC Merced studies Toxoplasma gondii, a humble, banana-shaped single celled parasite. Toxoplasma can infect virtually any warm-blooded animal on Earth. Toxoplasma is highly infectious and poses a significant risk during pregnancy and in the immune-compromised, such as those with HIV-AIDS.

Professor Kirk Jensen, with the Department of Molecular and Cell Biology, and recent graduate Scott Souza identified an immune gene, Nfkbid, that plays a central role in B-cell mediated immunity. This work yields promising targets for parasite vaccine development, and is detailed in a paper in the journal PLOS Pathogens.

A hallmark of an effective vaccine is antibody formation against the pathogen. Antibodies are secreted by B cells, specialized immune cells whose activation and genetics have been well studied in other microbial infections.

This work all started when Jensen noticed different laboratory mouse strains, when vaccinated, were more susceptible or resistant to Toxoplasma infection than others. Further, he observed there were major differences in susceptibility when mice were challenged with different Toxoplasma strains. Toxoplasma gondii can be found all over the world but its virulence and lethality vary dramatically by geographic regions.

“This whole story broke six or seven years ago, when I stopped using lab-adapted strains,” Jensen said. “When we shifted to infections with wildtype strains, we began to see all these new immune features.”

The lab used a forward genetic screen approach, starting from analyzing a phenotype — in this case, immunity to Toxoplasma — and traced that back to the candidate gene. The researchers did this by correlating the genetic makeup of multiple strains of mice that were able to survive infection and compared them to those that did not survive. From this work, they identified Nfkbid as the candidate gene responsible for survival.

To show that Nfkbid is responsible for protective immunity, the Jensen lab utilized a classic biology strategy: When in doubt, knock it out.

Jensen began asking his colleagues if anyone had a genetic mouse model with the Nfkbid gene was deleted. As luck would have it, the very mouse the Jensen lab needed was housed at UC Merced, by a collaborator on the paper from UC Davis.

“One major characterization of these mice is that they have defective B cell responses which could make them super susceptible to infection,” Souza said.

Jensen and his students vaccinated their mice with a primary infection of a weakened, attenuated strain of Toxoplasma. This allowed the mice to develop immunity and survive a more lethal secondary challenge with a virulent strain. When Scott repeated this with mice missing the Nfkbid gene, called “Bumble,” he found they could not survive the secondary challenge, nor were they able to mount antibody responses to the parasite.

Without the Nfkbid gene, Bumble mice have multiple problems with their B cell responses, including B1 cells. B1 cells are a specialized subset of B cells that come from the stem cell niche within the bone marrow and arise during fetal development.

To confirm Nfkbid’s involvement in protection against Toxoplasma, Scott reintroduced the B1 cell population back into the Bumble mice by depleting their original bone marrow and then transferring new bone marrow from wild-type, normal mice. These mice were then challenged with the parasite to confirm B1 protectiveness.

“We saw that the B1 population dramatically increases the chances of survival from 50% to 90%,” Scott said.

B1 cells are not regarded as targets for vaccines, but that could change and just in time.

Parasitic disease accounts for over one-fifth of child mortalities every year, and it is estimated that over two-thirds of the world’s population is infected with a eukaryotic parasite at any given time. Despite advancements made in vaccine therapies and research, vaccines against parasites continue to elude scientists.

Jensen, a member of the Health Sciences Research Institute, is one of the few within the Toxoplasma field to examine the role of B cells in disease clearance. Most of the field focuses on the T cell subset, another specialized lymphocyte group responsible for activating and maintaining long-term memory responses. While T cell studies are important, the lack of B cell studies reflects a gap in knowledge and understanding of protective immunity.

“To really understand what is required for immune responses [to] Toxoplasma and hopefully a parasite vaccine, you need to understand immunity deeply, and the pathogen at its fullness, their strategies and where they’re going,” Jensen said.