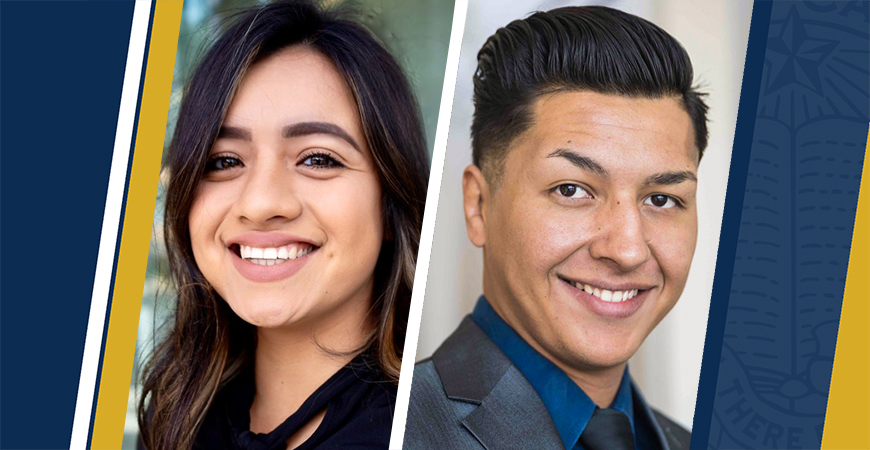 Bianca Garibay and Ruben Lemus are graduates of the Gallo Management Program.

Ruben Lemus was celebrating his graduation from UC Merced’s Gallo Management Program with a family dinner at nearby Yosemite Lake when his father reminded Ruben of a visit to the lake years earlier.

“My dad said at the time, ‘If you want to do something with your life, get an education. They are building a new school right over there. Maybe one day you could even go there,’” Lemus recalled. “I thought it was just a throwaway line.”

It turned out to be far more than that. The East Bakersfield High graduate completed a bachelor’s degree in business economics in 2018 and earned his Master of Management degree in 2019. He now works in Sacramento as a coordinator for Keurig Dr Pepper, a major producer and distributor of hot and cold beverages.

Lemus is one of many who has begun promising careers after completing the one-year Gallo Management Program, which offers practical, project-based management skills to address the cross-functional challenges business professionals frequently face. The program is accepting applicants through Feb. 15 for its Fall 2021 cohort.

Lemus’ Master of Management degree paid off immediately as he landed a job at Scientific Drilling in Shafter, where he had performed his summer capstone internship. Not only did he have a job right out of college, but it was in Kern County, where he was born and raised.

Then the coronavirus pandemic struck. The worldwide price of oil plummeted. Lemus was caught in the company’s second wave of layoffs in April.

“I was just getting started and it felt like I had lost everything I had worked for,” he said.

The professors and the faculty aren’t just there to teach. They’re there to build relationships.

Lemus dove into the search for his next job, getting up every day to send out applications and check his inbox. He endured months of rejections and no callbacks. He sought advice from UC Merced’s Career Services staff, who urged him to expand his search and to contact job recruiters directly.

His search ended last October when the Keurig Dr Pepper executive who is now his manager decided to take a calculated risk on him.

“They chose me over someone who was a manager for four years,” Lemus said.

The job checked all the boxes on his personal career requirements.

“It was a huge relief, and I had hope again,” he said.

Another graduate of the Gallo Management Program, Bianca Garibay, was a math whiz going back to her days at Buhach Colony High School. Most people figured the Merced native would become a math teacher. Garibay had other ideas; bio-engineering was enticing, and there was a university in her hometown that could deliver the academic goods.

Garibay liked staying close to family while getting the advantages of a UC education. She appreciated UC Merced’s fresh, new look and its small enrollment. What she realized she didn’t like, after some time at the university, was bio-engineering.

“Designing circuits was not for me,” she said.

It was one year of school, but it was a game-changer for my career.

She kept her undergraduate major, applied mathematics. Then she was recommended for the Master of Management program, which she saw as an opportunity to develop hands-on skills and make professional connections. She graduated in August 2020.

“It was the best program I’ve ever been in,” said Garibay, who now works in Lakewood as an operations support associate for A.P. Moller-Maersk, an international shipping and logistics company.

Garibay said the program helped her learn how to sharpen her ideas and present them effectively. Weekly presentations nudged her out of her comfort zone while she received feedback from classmates and instructors.

“On Fridays we would focus on professional development,” she said. “I learned how to make pitches about a project or idea – here’s what it is, here’s how to use it.”

Garibay said she’s eager to apply innovative ideas from her Master of Management education to A.P. Moller-Maersk’s customary workflows. She also knows she can turn to the Gallo Management Program for support.

“The professors and the faculty aren’t just there to teach,” Garibay said. “They’re there to build relationships.”

Lemus recently enjoyed a confirmation of his academic choices. In November, he sat down for an evaluation with his Keurig Dr Pepper supervisor who said the company values education and he could climb the corporate ladder more quickly than his peers because of his advanced degree.

His Master of Management degree was clearly worth it, Lemus said. “It was one year of school, but it was a game-changer for my career.”

As part of their commitment to advancing educational opportunities for students and giving back to their alma maters, Kyoki Prusela Phillips, ’14,...