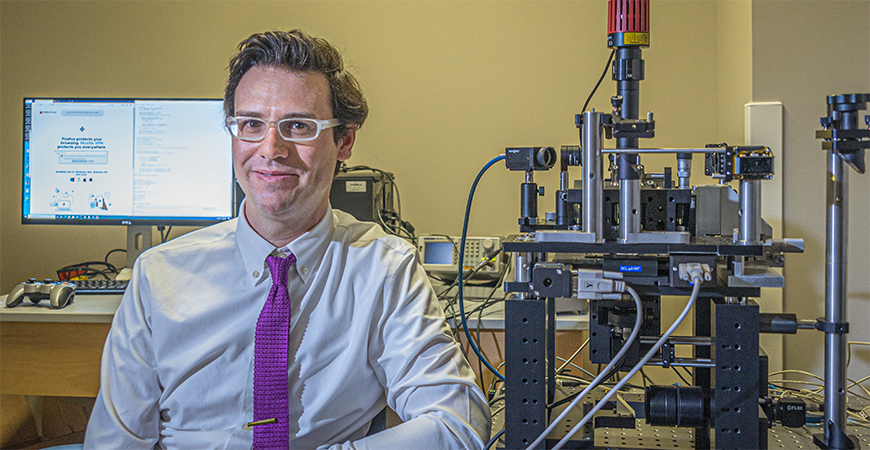 Physics Professor Dustin Kleckner has received a prestigious National Science Foundation CAREER award for his research — the third in his department this year. He studies how optical and acoustic binding controls interactions between/among particles and how it manipulates them into self-organizing structures.

In the long term, this research aims to enable fundamentally new types of materials for industrial, defense and consumer applications.

He is the 27th researcher from UC Merced and the seventh from the Department of Physics altogether to earn a CAREER award.

“I’m delighted, but not surprised, that Dustin has earned this award,” Executive Vice Chancellor and Provost Gregg Camfield said. “His work is part of a vibrant department that has quickly grown to exceed expectations for its age and size. We are proud that our university provides an environment conducive to the success of our faculty.”

CAREER awards are among the NSF’s most prestigious. They are given through the Faculty Early Career Development Program to recognize untenured faculty members as teacher-scholars. Early-career faculty members are selected based on three factors: the strength of their research proposals; their potential to serve as academic role models in research and education; and their leadership in their field and organizations.

“Professor Kleckner’s program is emblematic of the innovative science happening at UC Merced, and his CAREER grant is richly-deserved,” School of Natural Sciences Dean Betsy Dumont said. “He is the 15th CAREER recipient in the School’s history, which is extraordinary given our age and size.”

Kleckner will receive $546,676 over the next five years for his project “Self-Organization of Micro-Particles with Light and Sound.”

Kleckner and his lab focus on the study of structure in fluid and soft matter systems, with a particular emphasis on creating new optical tools to measure or manipulate matter.

Scientists have long known they can dramatically alter a material’s properties by patterning it on a microscopic scale, but there’s a problem: That patterning has to happen at a microscopic scale but over large distances. This prevents using direct techniques such as 3D printing, Kleckner said.

“If we want to do something similar — to create materials we want — we need a better understanding of the self-organization process, as well as of the practical methods for engineering the forces among microscopic particles,” Kleckner said.

The solution isn’t easy, he said, but his lab is working to see if it is possible to use lasers or ultrasound to create forces between microscopic particles and control their assembly. The idea of using light to control particles is well known, although much work remains to be done.

“Using sound to create those forces is almost entirely unexplored,” Kleckner said. “Although individual particles have been levitated in sound fields, creating forces between them using sound is a new frontier.”

Kleckner has been with UC Merced since 2016, when he began his faculty career. He joined after completing his postdoctoral research at the University of Chicago. He collaborates with faculty from the CREST Center for Cellular and Biomolecular Machines (CCBM).

“The fact that Dustin's CAREER award is the third from the Physics department this year alone and the seventh overall is testament to the cutting-edge research and scholarship of our physics faculty and our stature and impact on the community,” said Professor Ajay Gopinathan, department chair and co-director of the CCBM. “Dustin's work with this award should open up new and exciting avenues for guided self-assembly of designer materials.”

Each CAREER award proposal includes an educational outreach component, and Kleckner’s includes teaching freshman Spark seminars to introduce undergraduates to the basic experimental methods in physics and use them to measure things like the speed of light and radius of the earth. He is also working to increase the participation of underrepresented groups in science, technology, engineering and math (STEM) fields at the middle and high school levels by developing a similar summer course for high school students in collaboration with the Bobcat Summer STEM Academy at UC Merced. The course would expose students to the complete lifecycle of a scientific experiment, from design through execution and data analysis.

“It sounds ambitious for high school, but I’ve been so impressed with our freshmen, I realized high schoolers will only take a little more instruction and structure,” Kleckner said.

He said he has a passion for building things from scratch.

“I’m hoping to communicate that to students and show them what it’s really like to do physics,” Kleckner said.