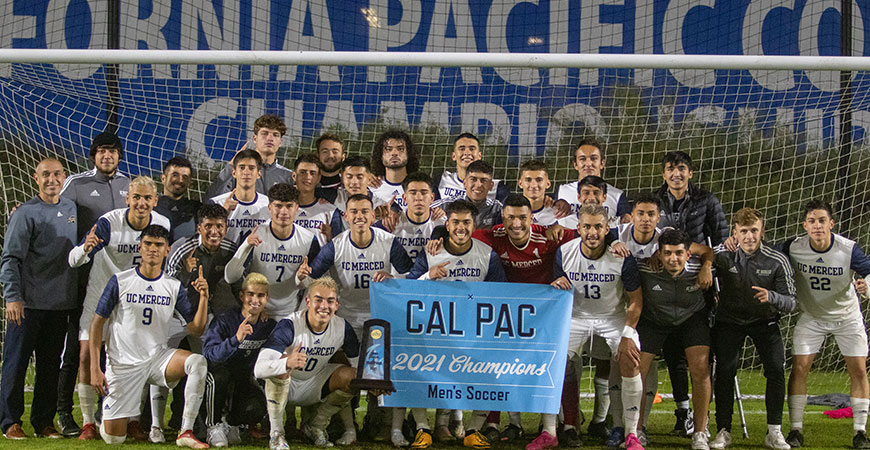 UC Merced will go back to the national tournament for the fifth consecutive year.

Lua's goal came just 18 seconds into the double overtime period. The Bobcats (14-4), who earned the right to kickoff, strung together six consecutive passes leading to the golden goal. Center back Oliver Zamora was a big part of the goal scoring sequence, sending a long ball up ahead where Juan Flores flew through the air and headed it to a streaking Marcos Ceballos down the left sideline. After a couple touches to get closer to the goal, Ceballos played a ground ball cross in which Lua one-timed it past the diving keeper to win the championship.

Lua's golden goal was the second in his postseason career. His first was on November 22, 2019 in the 95th minute against Menlo College to get the Bobcats their first ever win in the NAIA National Championship Opening Round.

Led by head coach Albert Martins, UC Merced will go back to the national tournament for the fifth consecutive year, taking on the 5th ranked St. Thomas University Bobcats in Miami.

A tale of two halves on Saturday night, UC Merced scored a quick goal and added a highlight reel goal in front of a capacity crowd just before intermission to take a 2-0 lead into the break. Marymount cut the deficit in half in the 54th minute before netting the equalizer in the 69th. The game was scoreless for the next 30 minutes (regulation and 1st overtime) despite 10 shots.

Ricky Rosas was responsible for opening up the scoring, heading in a Roberto Ceja cross in the 6th minute. Juan Flores was also credited with an assist on the corner kick play.

Following a flurry of Marymount shots and Marco Sobrevilla saves, Juan Flores doubled the Bobcats lead with this highlight reel goal from roughly 30 yards out. Positioned outside the 18-yard box and well to the left of the goal, Flores found the upper 90 with a perfectly curved left-footed shot.

Jesus Enriquez earned his first career assist on the score.

It was fitting that Rosas and Flores scored the first two goals as they are the most experienced players in program history having played in 85 and 80 games, respectively.

Sobrevilla made a program-record 13 saves, six in the second half. Sobrevilla was not tasked with a save in either overtime period.

Prior to Sobrevilla, Heriberto Diaz held the UC Merced singe-match record with 11 saves on Oct. 13, 2011.

UC Merced is now unbeaten in five of the last six matches against Marymount dating back to the 2017 season. Prior to the Bobcats success against Marymount, the Mariners had won the first eight matches in the series history.

Up next, the Bobcats await their location and opponent for the 2021 NAIA National Championship Opening Round. The selection show can be seen here.

The Opening Round is scheduled for Nov. 18-20. The NAIA National Championship Final Site will take place Nov. 30-Dec. 6 in Decatur, Ala.