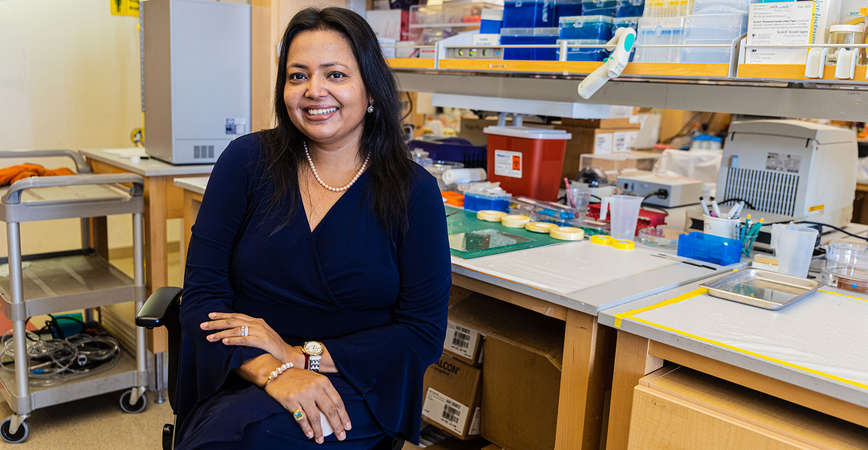 Aparupa Sengupta co-authored a commentary about biosafety officers' roles in epidemics. The paper was published by Johns Hopkins University.

Aparupa Sengupta, Ph.D., was talking to her staff when her phone rang. It was the police chief. Could she join him today for a working lunch?

On that warm, cloudless February day in 2020, the thunder of a growing health crisis was ominous but distant. Two days later, a man in Seattle would be the United States’ first reported COVID-19 fatality. Twenty days after that, California Gov. Gavin Newsom would make national news by ordering a lockdown of the nation’s most populous state.

In another 14 months, Sengupta’s father would test positive amid a huge spike of coronavirus cases in India. He would pass away three days later — another soul lost in a pandemic that as of early October had claimed nearly 4.8 million lives worldwide.

However, the global death toll was less than 3,000 when Sengupta, then UC Merced’s biosafety/biosecurity officer, went to the campus police department a few yards from her Environmental Health & Safety office. Executive Director of Public Safety and Chief of Police Chou Her was there, along with Emergency Manager Laura Rodriguez-Mascorro.

As the three ate Chinese take-out, Her laid out the situation as he saw it. COVID-19 was coming, and the university needed a response plan. It needed someone who could pick up threads of early research into the virus, along with the shifting guidance from federal and international agencies, and weave them into information the campus community could act on.

“I think I caught her a little off-guard,” Her said. “She was a little nervous, as I’m sure anybody would be in that position. But I told her I can’t think of anybody on campus who can understand this situation better.”

Sengupta was being asked to take her expertise in biosafety, focused primarily on developing and implementing safety procedures for the campus’s research facilities and high-containment labs, and apply it to a global pandemic. Her reaction?

She was a little nervous, as I’m sure anybody would be in that position. But I told her I can’t think of anybody on campus who can understand this situation better.

Chou Her
Executive Director of Public Safety and Chief of Police

“I told him he could count on me. I think I was used to being thrown into the deep end of the pool. Mainly, I was calm. That was something I inherited from my dad.”

In the weeks and months to come, Sengupta collaborated on developing health guidelines and on crafting presentations to executive leaders. After university operations were curtailed in March 2020, sending home thousands, she held safety training classes for staff whose jobs required them to remain on campus.

“I’d come in the morning for the first shifts, like the custodial staff, then stretch my schedule so I could work with the night shift,” Sengupta said. “These people are the most important. They are the most vulnerable ones.”

Over the months, as part of UC Merced's COVID Response Center, she developed protocols for on-campus testing and proper shipping of test samples to UC Davis and UC San Francisco. As the university progressed through the pandemic, she worked on guidance for the restart of lab research and, most recently, the resumption this fall of in-person instruction and support.

Those associations led in part to Sengupta co-authoring a commentary that appeared in August in a peer-reviewed journal edited by Johns Hopkins University faculty. The commentary asserts the pandemic showed how biosafety professionals can not only help schools, businesses and communities weather an epidemic, but can recommend steps such as training and building design to ease the blow of the next epidemic.

“Biosafety consultations during epidemics have been largely ad hoc,” the commentary says, “because prior to the COVID-19 pandemic, no formal mechanism existed for identifying and engaging biosafety professionals to support local pandemic planning and response.”

Sengupta was steered to her chosen profession by her mother, Tanusree Sengupta, an educator with a master’s degree in zoology. Aparupa was aiming for a career in medicine, but Tanusree said biotechnology was an up-and-coming field and her daughter should go for it.

After earning a master’s degree in biotechnology at Bangalore University, she came by herself, at age 25, to the United States, where she entered Michigan Tech, a research university of about 7,000 students in the state’s upper peninsula. (“The average snowfall there is 200 inches,” she said; to be precise, it’s 218.) There, she earned a master’s in molecular genetics and biotechnology, then a Ph.D. in biological sciences.

I’d come in the morning for the first shifts, like the custodial staff, then stretch my schedule so I could work with the night shift. These people are the most important. They are the most vulnerable ones.

In 2018, she was in her third year as biosafety officer at Rutgers University when she was contacted by Ro McKinney, UC Merced senior executive recruiter. McKinney made her pitch, describing the university as a partially baked cake that needed creative cooks willing to create something special. Sengupta was sold.

“I love being part of things while they are still working up,” she said. “I can add my amazing ingredients to it and make it an awesome cake.”

Throughout 2020, Sengupta and her team of biosafety professionals worked with others to guide the university through the health crisis. In October, she was named one of Chancellor Juan Sánchez Muñoz’s Big Cat Heroes for her efforts. In January 2021, as California and the United States endured the pandemic’s biggest wave, she was promoted to EH&S assistant director. The campus was still powered down.

Then, in the spring, her home nation experienced a horrifying flare-up of coronavirus cases. India’s government stoked the flame by pushing back against social distancing and other mitigation measures.

Against that harrowing backdrop, Sengupta’s father, Dilip, was tested for COVID-19 on April 19 at a local hospital in preparation for elective surgery. The result came back as positive on a Monday. He passed away the following Thursday.

Sengupta wanted desperately to go to India to be with her family. But though there was no impediment to flying there, there were real concerns that health restrictions would hold up a return to the United States. She and husband, Saurabh Mitra, an engineer for Georgetown University, even went to the Indian consulate in San Francisco looking for answers. In the end, they knew that Sengupta staying in Merced and continuing her work was what her parents would want.

She last spoke to her father about a week before Dilip passed away. They talked about an interview with Sengupta that had been carried on TV in India.

“He was very emotional. He told me, ‘You have no idea how proud you’ve made me,’” Sengupta said. “'You do what you’re doing and every step of the way, you will see me standing right there. Watching your back.’