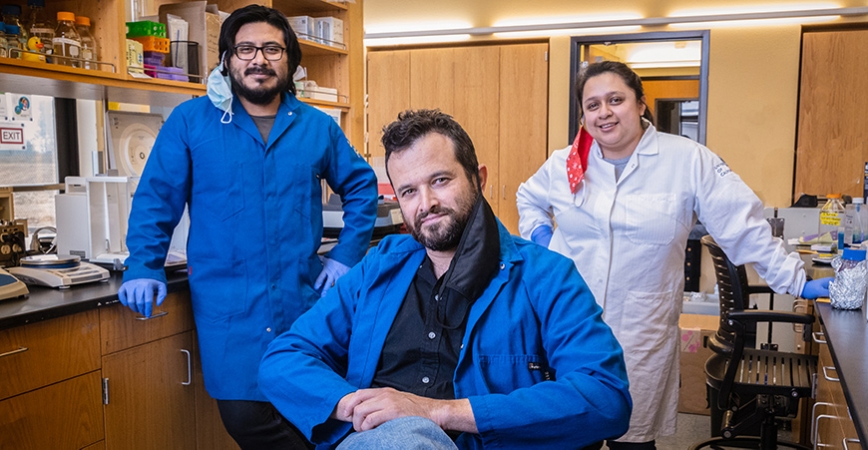 Professor Shahar Sukenik, center, and his graduate students, including Eduardo Flores and Karina Guadalupe, are unraveling a protein puzzle and contributing to knowledge about diseases such as cancer.

Biophysical chemistry Professor Shahar Sukenik and the graduate students in his lab are trying to make sense out of what might seem to some to be chaos. They aim to better understand how a series of floppy, malleable proteins function — or malfunction — inside cells.

The work has earned Sukenik a $1.86 million, five-year Outstanding Investigator award from the National Institutes for Health (NIH).

“These proteins are common and play very important roles in our cells and are linked to the progression of cancer and other diseases,” Sukenik explained. “But how they function inside our cells is poorly understood.”

These “intrinsically disordered proteins” have puzzled scientists for decades because they are floppy and don’t have well-defined structures. Sukenik likened them to “machines made of spaghetti” — despite having a flexible shape they can still function in the cell.

“Disordered proteins are responsible for central processes in our bodies, but are also associated with diseases, including cancer, Parkinson’s and Alzheimer’s,” he said. “Because of their disorder, developing drugs that target them is nearly impossible. A better understanding of how they function can help explain their involvement in disease and open the door for new therapies.”

The grant will allow Sukenik’s lab to develop innovative experiments that combine simulations, biochemistry, genomics and microscopy to study how the cellular environment affects disordered proteins, linking their function to changes in the cell’s chemical composition.

He said the students’ work was instrumental in writing the proposal for the NIH grant.

Eduardo Flores, a first-year Chemistry and Chemical Biology graduate student from East Los Angeles, explained that cells are highly dynamic systems, with many rapidly moving parts. Cells are constantly undergoing change, and this can affect disordered proteins. He’s looking at a specific disordered protein that is directly tied to cancer progression and can condense into visible droplets inside the cells — a common phenomenon in disordered proteins.

“The composition of these droplets is critical to their function,” Flores said. “We want to see how the cellular environment changes this composition.”

Karina Guadalupe, a third-year Chemistry and Chemical Biology graduate student from Menifee, is using state-of-the-art gene-editing tools to target whole genomes at once and identify which disordered proteins help cells adapt to stress.

“When you zoom in on one cell, it’s very chaotic but it’s still functioning. We want to understand how cells use their own internal environments to control the proteins,” Guadalupe said.

Like all good researchers, Guadalupe has a passionate curiosity and a sense of wonder about her subject.

“It’s amazing that something as small as a protein plays such a big role in every function of our bodies,” she said. “We’re looking at things on the genomic, molecular and atomic scales, both in the test tube and in the cell. It’s really exciting that we can examine all these different perspectives.”

Sukenik is in the Department of Chemistry and Chemical Biology in the School of Natural Sciences and is a member of the Health Sciences Research Institute and the CREST Center for Cellular and Biomolecular Machines, as well as the QSB graduate group. He joined the campus in 2017, and he and his lab have been studying disordered proteins since.

“With this support, our lab can really undertake research that is inherently risky, but can also reap groundbreaking new discoveries,” he said.