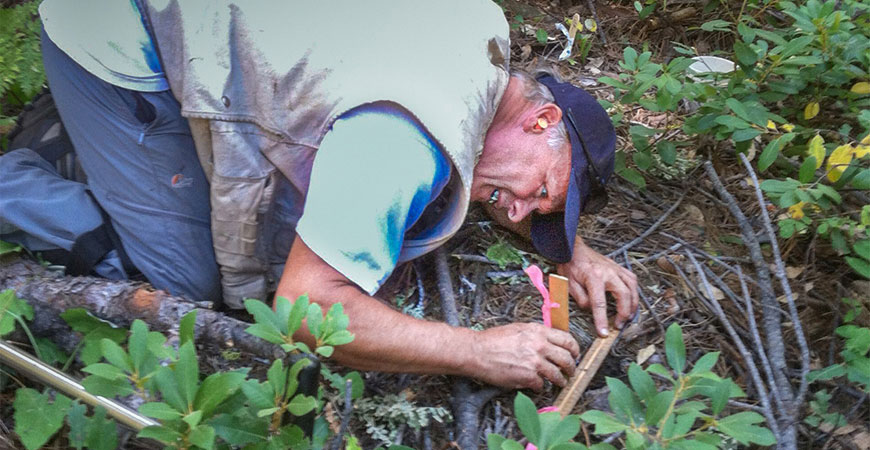 But the National Science Foundation, which funded the CZOs, is decommissioning the sites and has reconfigured the program around themed research clusters in a new program called the Critical Zone Collaborative Network (CZCN).

UC Merced Professor Stephen Hart, Professor Emma Aronson from UC Riverside and colleagues from Riverside, UC Berkeley, Idaho State University and the universities of Arizona, Kansas and New Hampshire, are leading a cluster, thanks to a new NSF grant that will total $3.7 million over five years.

Their geomicrobiology and biogeochemistry cluster will address the hypothesis that soil type, water and rock composition play key roles in determining how deep the surface influences — such as vegetation and climate — drive microbial community composition, diversity and activity.

“We’ve done some preliminary analyses of soil microbial communities, going down 1 to 2 meters, and have some surprising results,” Hart said. “We had expected that microbial communities would be larger and more diverse near the surface, where there’s more organic matter for them to eat, and that biodiversity would diminish with depth.

But 15 of the 20 sites the researchers analyzed showed even distributions of biodiversity at all depths. And different soil pits at the same site showed substantial differences in microbial biodiversity.

“Now we want to do a much more intensive analysis,” said Hart, professor of ecology in the Department of Life and Environmental Sciences in the School of Natural Sciences , and an affiliate with the Sierra Nevada Research Institute. He and the others in his cluster have selected several sites, including one in an oak savannah and another in the middle of a nearby mixed-conifer forest that were part of the former Southern Sierra CZO. The mixed conifer site is close to Shaver Lake and has been threatened by the Creek Fire, which has already burned hundreds of thousands of acres in the Sierra National Forest and could affect the project.

The researchers plan to install soil sensors at various depths to continuously measure moisture, temperature, oxygen and carbon dioxide concentrations. These data will be used to characterize the environment where the microorganisms occur. They also plan to extract and analyze microbial DNA and RNA from the soil at these same depths so they can characterize the composition of the microbial communities and the genes being expressed that indicate different metabolisms. These molecular measurements will be compared to analyses of soil processes such as the activity of enzymes released by microorganisms that are involved in the breakdown of dead plant organic matter and nutrient release.

When it launched the original CZO program in 2007, the NSF charged scientists with gaining a better understanding of the “critical zone,” from the tree canopy to the bedrock, where fresh water flows and soil forms. This is the zone where water, air, soil, rock and life interact.

Each observatory benefits from cross-disciplinary collaboration: experts working together from fields including hydrology, geochemistry, geomorphology, ecology and climatology, the agency said.

The Southern Sierra CZO has been used by UC Merced faculty and students as well as researchers from all over the world.

There are 10 clusters in the CZCN, with one being a coordinating hub to manage data across projects, plan for future facility and equipment needs, and support outreach and education activities. This approach will lead to increased exchanges of data, information and learning opportunities for researchers and students at all levels, the NSF said.

How does socioeconomic inequality affect people? Seeing expensive items such as cars, which function as signs of social class, can potentially...

School of Engineering professors Roger Bales and Martha Conklin have written a new article for The Conversation discussing the changes that need to be...

AI is for the Birds in a New Computer Science Project

Bird species usually are counted twice a year by wildlife surveyors: once during the breeding season and again during the Christmas Bird Count . New...