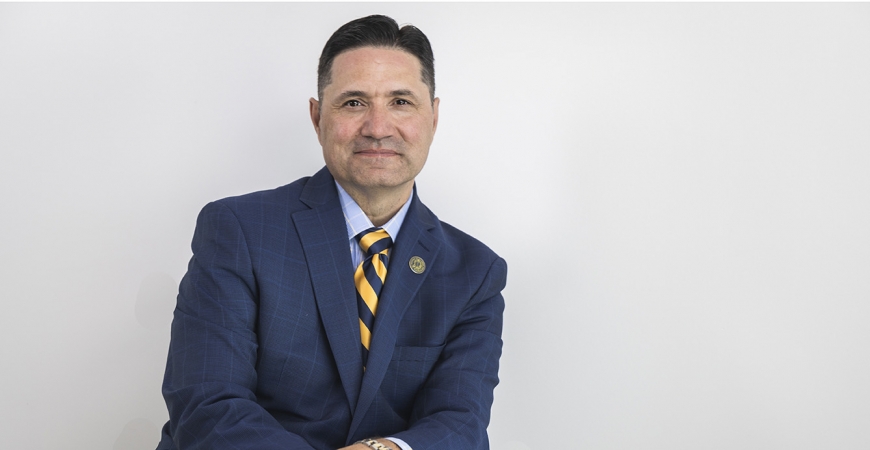 UC Merced Chancellor Juan Sánchez Muñoz has been named the recipient of the 2020 Cesar Estrada Chavez Award from the American Association for Access, Equity and Diversity

UC Merced Chancellor Juan Sánchez Muñoz was a first-generation college student who became a lifelong advocate for education and the social mobility it provides to students from underrepresented backgrounds. Next month, he will be honored for his leadership in support of workers’ rights and humanitarian issues.

Muñoz has been named the recipient of the 2020 Cesar Estrada Chavez Award from the American Association for Access, Equity and Diversity (AAAED). He will receive the award on Oct. 8 during the AAAED’s 46th National Conference and Annual Awards, which will be held virtually.

The award is named for Cesar Chavez, an American labor leader and civil rights activist who, along with Dolores Huerta, cofounded the National Farm Workers Association (later the United Farm Workers union, UFW) in 1962.

“My father was a farmworker here in the San Joaquin Valley, and many of our students at UC Merced come from similar backgrounds to mine,” Muñoz said. “To receive an award bearing the name of Cesar Chavez is a great honor, and I look forward to continuing to advance diversity, equity and inclusion at UC Merced.”

Muñoz joined UC Merced this year from the University of Houston Downtown (UHD), where he served as president and, within his first year, launched the university’s largest capital campaign and led the institution’s recovery efforts after Hurricane Harvey. He also presided over UHD’s increases in enrollment, retention and graduation, and new degree programs including a B.S. in nursing and data science.

Prior to UHD, Muñoz served as senior vice president for institutional diversity, equity and community engagement and vice provost for undergraduate education and student affairs at Texas Tech University. Muñoz also has served on the Association of Public and Land-Grant Universities’ Commission on Access, Diversity and Excellence, and is currently on the board of directors of the Hispanic Association of Colleges and Universities and the American Council on Education.

After a three-year delay due to the pandemic, Bobcat Day is back at UC Merced. The day is dedicated to first-year students, transfer students and their...