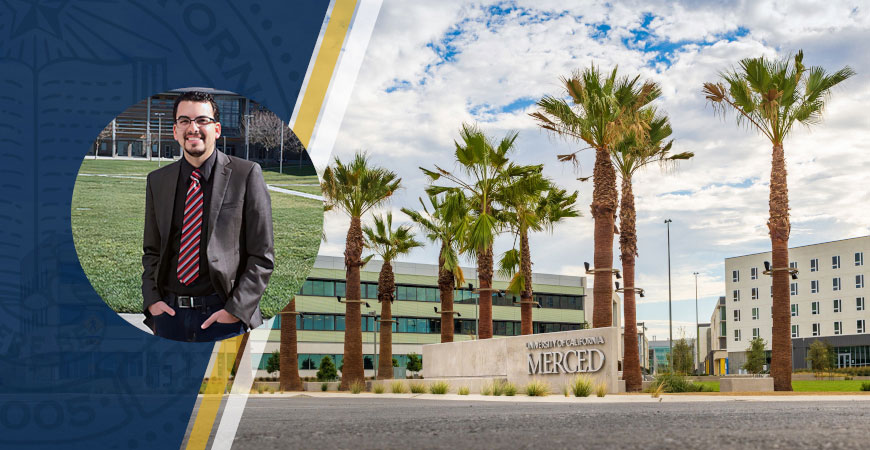 As scientists build smaller and smaller machines, they need to understand the invisible forces that make those machines work.

Thanks to research and the initiative of then-UC Merced graduate student Jake Pate, some of those forces can now be measured and manipulated.

Pate, who graduated in May with a Ph.D. in Physics and is now a postdoctoral researcher at the National Institute of Standards and Technology in Boulder, Colorado, worked under physics Professor Jay Sharping in the School of Natural Sciences. While in his lab, Jake reached out to scientists in Australia with a project focused on the Casimir effect — the force that exists between two metallic objects when they are extremely close together, but not touching.

“This force wants to push these two objects together,” Pate explained. “The Casimir force is strong enough to change the intrinsic behavior of the objects.”

He designed and made a pinning device — a small cone — that, when placed near a vibrating drum at nanoscale distances can stop the vibration. With enough pinpoints, called “clamps,” scientists can create new shapes and new behaviors.

“This work is extremely important for micro-electromechanical systems (MEMS), tiny machines with moving parts,” Sharping said. Some common commercial applications of MEMS include inkjet printers; accelerometers in cars that deploy airbags; accelerometers in game controllers, cell phones, digital cameras and personal computers; silicon pressure sensors such as those that sense car tire pressure sensors; biomedical devices such as stents; ultrasound transducers; and tiny speakers, such as the ones in earbuds and hearing aids.

“During the past 10 years we have learned to make machines small enough that we need to understand quantum mechanics to understand how they work,” Sharping said. “If you bring two pieces of material together, they experience forces that would be irrelevant if they were father apart. Up close, they might not behave the way you want them to, so objects built with them will not work the way you want them to.”

Pate’s device changes that, though technology has not quite caught up with him yet.

“You can do all kinds of things with it,” Pate said. “You can enhance the drum, making it vibrate longer, change the shape of vibrations, or even stop it from oscillating at all — it’s a way of controlling the object without ever actually touching it.” 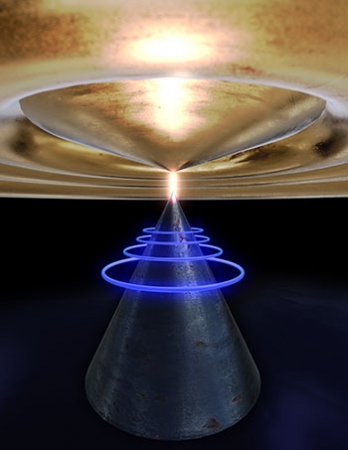 Jake Pate created this image to depict the clamping device and show how it works.

The next steps will be to use the clamping device to see if it can enhance the Casimir force’s sensitivity.

Until recently, researchers believed the Casimir effect only occurred at very low temperatures such as absolute zero, but Pate and his team demonstrate that the force can be used and have far-reaching implications at room temperature, too.

“This work represents a major advance in precision measurement and control with a variety of applications,” Department of Physics Chair Professor Ajay Gopinathan said. “We are very proud our physics students and faculty who are making fundamental discoveries with a broad impact.”

The results of their study were recently published in Nature Physics, with Pate as the lead author.

"If you can measure and manipulate the Casimir force on objects, then we gain the ability to improve force sensitivity and reduce mechanical losses, with the potential to strongly impact science and technology,” said Professor Michael Tobar with the University of Western Australia, who collaborated with Pate’s group on the project. “To understand this, we need to delve into the weirdness of quantum physics. In reality, a perfect vacuum does not exist — even in empty space at zero temperature, virtual particles, like photons, flicker in and out of existence.”

Pate became curious about invisible forces when he was making microwave cavities in the UC Merced machine shop and noticed some “strange results.” He reached out to Tobar and drove the collaboration, which allowed him to live in Australia for three months.

“Jake really created this opportunity for himself and for our team, and it was great for him, for us and for both universities,” Sharping said. “He’s a perfect example of how our students are unafraid to do things other people might not try, like reaching out to another university for help. Science works best when more scientists to talk to each other.”