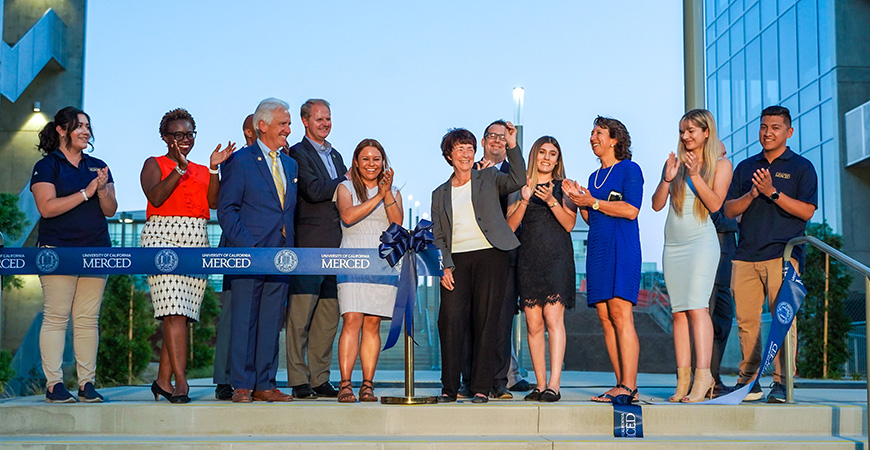 Outgoing Chancellor Dorothy Leland cut the ribbon to signify the opening of the second phase of the Merced 2020 Project.

Two simple words, “Leland Legacy,” captured the significance of Wednesday’s opening event for the second phase of the Merced 2020 Project, an event that doubled as a goodbye and thank you to outgoing Chancellor Dorothy Leland.

The message graced a wall of the new Sustainability Research and Engineering Building in large white block letters, a nod to Leland’s tireless effort and motivation to lead the award-winning expansion project.

Shortly after taking the podium for her last speech as UC Merced’s leader, Leland expressed relief in moving into retirement, but also pride in her eight years at the helm of the growing university. Standing in between two of the buildings she helped create, Leland thought back to the early stages of moving the project from a concept to reality.

“I’m a little bit emotional. I’ve always thought of myself as pretty tough,” Leland said. “I want to thank everybody that has been a part of this project the whole time. Nothing happens without an incredible team behind you.”

A ribbon-cutting marked the opening of the new Academic Quad, where the Sustainability Research and Engineering Building serves as an anchor along with the Arts and Computational Sciences Building. The two buildings are the headliners of the second phase of the project and provide the campus space to expand its interdisciplinary approach to research and teaching.

UC Board of Regents Vice Chair Cecilia Estolano, U.S. Rep. Jim Costa and Merced Mayor Mike Murphy were among the attendees. Plenary Concessions Executive Chairman Dale Bonner discussed the company’s involvement as the development partner and what being a part of the project means to his group.

“We know that high-quality facilities enhance learning and productivity,” Bonner said. “That’s why we’re so proud to be a part of the exciting Merced 2020 Project, which will make this campus not only a great place to study and conduct research, but a campus of choice for many generations of students working toward social mobility.”

A 'Thank You' video for Leland was played at the Wednesday event.

Building a Center of Excellence

UC Merced’s unique public-private partnership (P3) with Plenary and lead contractor Webcor has garnered numerous awards and recognition from across the country, including being named P3 Social Infrastructure Project of the Year in 2017 and “Americas P3 Deal of the Year” by Thomson Reuters’ Project Finance International in 2016.

Most importantly, the project exemplifies the university’s commitment to sustainability. Every building in the project is expected to earn LEED Platinum certification through the U.S. Green Building Council.

Sustainability is also the focus of one of the new buildings. The Sustainability Research and Engineering Building will allow faculty and staff — including the Office of Sustainability, which has moved from the Downtown Campus Center to the building — to collaborate and provide guidance for a multidisciplinary campuswide sustainability initiative in the university’s first Center of Excellence. The Center focuses on integrating sustainability into all university functions — teaching, curriculum, research, student engagement, outreach and operations.

“Sustainability is a grand challenge, and since UC Merced’s inception, diverse students, staff and faculty have generated knowledge and solutions that advance us toward a sustainable future,” said Faculty Advisory Committee on Sustainability Chair Professor Michael Dawson. “Meeting the grand challenge requires a coming together of the university with surrounding communities, and this new academic quad provides a home for imperative convergence research and an accelerator for the sustainability initiative.”

Faculty members in the departments of Civil and Environmental Engineering and Mechanical Engineering will make up the bulk of the School of Engineering’s presence in the Sustainability Research and Engineering Building.

School of Engineering Dean Mark Matsumoto said the new building will help expand the number of faculty and research opportunities for the departments.

“The Center of Excellence, machine shop and maker space are greatly welcomed, allowing more researchers and students from the schools of Engineering and Natural Sciences to collaborate more and create lab equipment and prototype devices for research, development and testing,” Matsumoto said. “With the recent enrollment increases in the engineering majors over the past five years, the new instructional lab spaces will allow us to meet enrollment growth and offer us opportunities to expand our lab course offerings.” 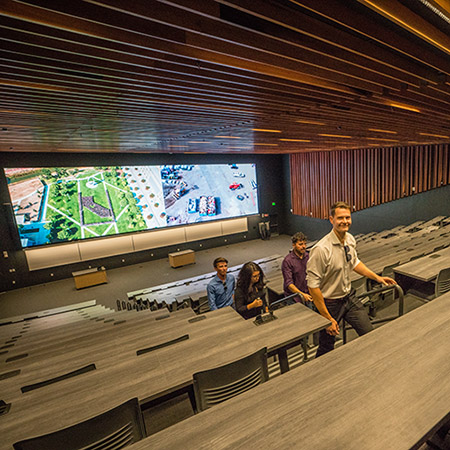 The cinema-quality auditorium was among the features attendees got to explore in the new Arts and Computational Sciences Building.

Rolling Out the Red Carpet for the Arts

Whether it’s practicing in the new dance studios or performing in the new cinema-quality 292-seat auditorium, The Arts and Computational Sciences Building will enable students to hone their crafts in spaces tuned toward their success.

“These are going to be among the most utilized spaces on campus,” said Professor Jayson Beaster-Jones, who served as a GAMWS faculty consultant on the project. The spaces required minute attention to detail and had to be fitted properly with the appropriate technology, such as sprung wooden floors and tall mirrors in the dance studios, as well as the right acoustics in the auditorium.

“This required someone to be there throughout the entire process to think about sound and to ask the applied mathematicians on the floor above us what they need to make this arrangement work for them,” Beaster-Jones said. “Despite how loud we're going to be, I don’t think anyone will have to worry about sound.”

Professor and Chair of the Department of Literatures, Languages, and Cultures Katie Brokaw, who produces the campus’s annual Shakespeare in Yosemite event, said the new building will provide opportunities to expand the scope of arts classes and enable the theatre, music and dance programs to have their own rehearsal rooms. Until now, groups have had to rehearse in hallways when the one rehearsal room was occupied, she said.

“I am looking forward to being able to incorporate more acting and movement into our drama classes when we teach in the new studios,” Brokaw said. “These spaces will greatly expand the student experience both in and outside of class, allowing students many more opportunities to work together on collaborate performative arts.”

The Applied Mathematics department said the move onto the third floor of the Arts and Computational Sciences Building will put the entire group in the same building for the first time since 2007. Former department Chair Professor Francois Blanchette helped coordinate the department’s move into the new building and said having a home base that also features the Math Center will attract students to the major. The close proximity to physics and chemistry faculty — the departments will be on the second floor — will ensure computational sciences research collaborations.

“Being physically close is particularly useful when it comes to co-advising students, using each other as a sounding board and generally exchanging ideas,” Blanchette said. “The best research is often unplanned, so it is important to facilitate frequent informal meetings with other scientists.”

Student Commencement Speakers to Share a Message of Unity and Perseverance

In front of more than 1,400 fellow Bobcats, Cathryn Flores and Maya Morris, the student commencement speakers for the Class of 2022 will share their words...

For the first time since spring 2019, UC Merced will honor the achievements of spring graduates with a traditional in-person commencement weekend this...