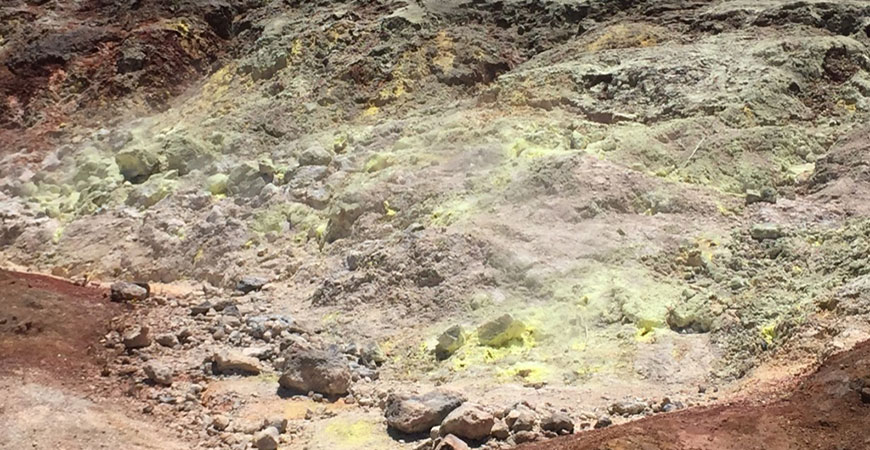 This soil chronosequence in Hawaii built up over millions of years and includes this yellow, sulfur-rich soil. Photo courtesy of Asmeret Berhe.

A rigorous, first-of-its-kind global study provides new insights into the natural history of soil biodiversity and shows that changes in soil pH during soil development is a major driver of most of that biodiversity.

Published recently in the prestigious journal Proceedings of the National Academy of the Sciences, the paper “ Changes in Belowground Biodiversity During Ecosystem Development ” — co-authored by two UC Merced professors and UC President’s Postdoctoral Fellow Fernanda Santos — details research performed by an international team.

The paper reveals new information about ecological patterns driving the changes in soil biodiversity over millions of years and how they might apply to a drier, hotter world.

Led by Manuel Delgado Baquerizo, a Marie Skłodowska-Curie Postdoctoral Fellow at Rey Juan Carlos University in Spain and University of Colorado, Boulder, the team examined soil chronosequences from around the globe to learn about factors controlling changes in the biodiversity of soil bacteria, fungi, protists and invertebrates.

The researchers found that changes in soil biodiversity are driven by changes in plant cover or soil pH (i.e., acidity) depending on the degree of ecosystem development.

Soil microbes and animals — from the smallest soil bacteria to the largest earthworms — provide a vast variety of ecosystem services including waste and toxin recycling, climate regulation and nutrient availability for crops. The organisms are essential for human well-being and ecosystem sustainability, Baquerizo said.

Despite how important soil biota is, researchers know little about the natural histories of soil organisms and how biodiversity changes over millions of years, and whether there are any global ecological patterns associated with such changes.

Soil itself has often been overlooked in ecological research, Hart said, and this project offered researchers a chance to look at chronosequences — sites that have developed over different periods of time with relatively small differences in other soil-forming factors — from around the world.

“It is very difficult to control for all of the other factors that influence soil development besides time, so chronosequences are not common,” he said.

"Sites such as the Merced Chronosequence – a 3-million-year age gradient of soils – are valuable for our understanding of the soil system and the ecosystem processes that it supports change over long-periods of time."

The researchers took data from 55 sites that range from deserts and polar ecosystems to temperate and tropical forests, including one near Merced that has been studied by Professor Asmeret Asefaw Berhe , a co-author of the paper, and Santos.

“Sites such as the Merced Chronosequence – a 3-million-year age gradient of soils – are valuable for our understanding of the soil system and the ecosystem processes that it supports change over long-periods of time,” Berhe said. “This work also highlights how soil chemical processes and properties impose fundamental controls on life in the terrestrial ecosystem.”

“I am very happy that we were able to include grassland soils from sites around Merced,” Santos said. “Some of these sites were in privately-owned land, so this work was also possible thanks to the help of our community.”

The researchers had hypothesized that the number of plant species would reflect soil biodiversity, but there was no correlation between above- and below-ground biodiversity, which came as a surprise, Hart said.

Berhe, Hart and Santos, all with the Department of Life and Environmental Sciences and the Sierra Nevada Research Institute, played prominent roles in analyzing data from the study, and Hart said this project was particularly interesting because of the scope of the data gathered.

“I feel proud to have been part of this collaboration because it takes a village to do this kind of research — but this is how we’re going to tackle the grand questions and get the right information to make the grand decisions.”