UC Merced Aims to Draw 1,000 Donors in a Day with ‘Give Tue UC Merced’ Campaign 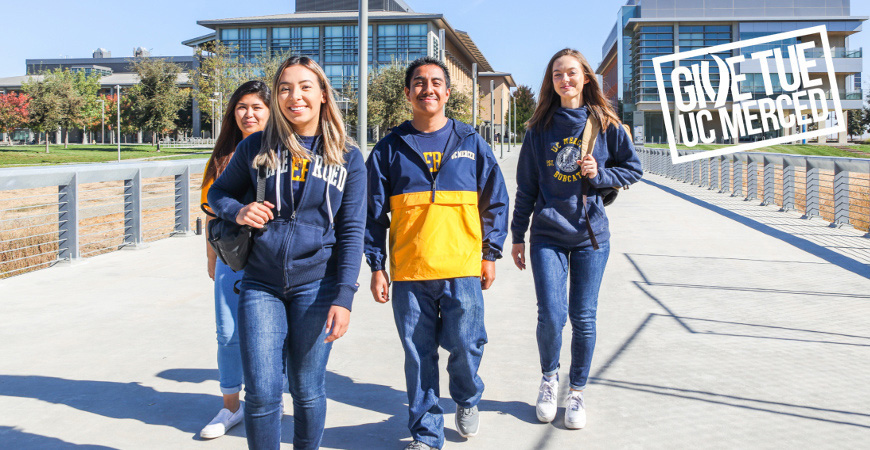 Jose Nava-Mejia hopes to work in renewable energy after he graduates from UC Merced. That means every moment spent on his environmental energy courses is a moment invested in the planet’s future.

Kelsey Duggin hopes to use her microbiology and immunology studies to become a virologist and work with stem cells. Vania Huaranga plans to become a neuropsychologist.

The three are among the scores of UC Merced undergraduates whose studies are backed by the Build the Future Scholarship Fund, which is supported by donations collected during Give Tue UC Merced.

The annual day of giving campaign takes place Tuesday, Dec. 3. During the 24 hours of worldwide “Giving Tuesday,” UC Merced has set a goal of drawing gifts from 1,000 donors.

Donations designated for the Build the Future Scholarship Fund will be matched 3-to-1 by Foster Poultry Farms, quadrupling the impact of every dollar.

In addition, donors can support UC Merced’s Graduate Student Fellowship Fund. The first 100 donations to the fund will be amplified by a matching donation that will provide up to $1,000 from longtime campus friends Dr. Robert Bernstein and Dr. Jane Binger. Vice Provost and Graduate Dean Marjorie Zatz is offering a similar match.

This year’s Give Tue UC Merced marks the sixth year of the campaign.

“Support from the gifts made during Give Tue UC Merced transforms the lives of our students, their families and their communities,” interim Chancellor Nathan Brostrom said. “Every donation helps us build a better future by supporting the education of the next generation of world-class researchers.” 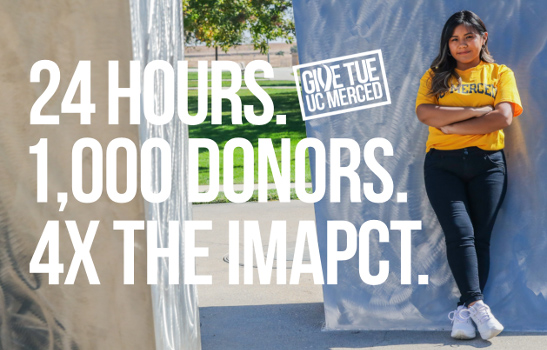 Nava-Mejia, a 19-year-old first-generation student from Merced, said the Build the Future Scholarship allows him to devote more time to his studies.

“It means a lot because I can focus on my education,” he said. “With the scholarship, I can pay for my books and transportation costs. It also lifts a burden off my parents.”

UC Merced is a national leader in student outcomes and social mobility, with nine out of 10 students receiving some form of financial assistance. Such financial support was one of the main reasons Duggin decided to enroll.

“The support from the Build the Future Scholarship has provided me with the ability to pay for all of the basic necessities,” said the second-year student from La Crescenta. “It gave me reassurance that hard-working students are rewarded and it motivates me to continue to prioritize my studies.”

For Huaranga, a first-year psychology major from Antioch, the Build the Future Scholarship not only provides financial backing, it helps her feel supported as she transitions into college life.

“As a first-generation student, college tuition can be very costly for our families,” she said. The Build the Future Scholarship “has been very significant to me for many reasons but my main reason is that it gave me a sense that there are people out there who support students. This made me feel that I am not alone and that there are people who believe in me.”

“Support from the gifts made during Give Tue UC Merced transforms the lives of our students, their families and their communities.”

Last year, the Give Tue UC Merced campaign raised more than $170,000, bringing the total collected over the past five years to more than $1.5 million.

Online gifts can be directed to givetue.ucmerced.edu ; Donations also will be collected at locations across campus on Tuesday, Dec. 3.

Numerous events will be held on campus throughout the day to raise awareness of Give Tue UC Merced and support a culture of giving back. Housing and Residence Life is organizing a “Dollars for Scholars” carnival event, including a chance for donors to toss pies at resident assistants and a holiday social featuring an ugly sweater contest. The events are open to all students and a $1 donation is encouraged.

The Graduate Division will offer coffee and churros to donors Tuesday afternoon.

Last year marked the second year in which the campus met its 1,000-donor goal on Give Tue UC Merced. Those donors included nearly 500 students, underscoring a growing tradition of giving among Bobcats.

Huaranga said receiving support from the Build the Future Scholarship has inspired her to want to, in the future, give scholarships that will help students from her hometown attend UC Merced.

Duggin said she also hopes to contribute to the university.

“I hope to eventually be able to give back to UC Merced, specifically to benefit the students. I want the future generations to have access to a great education without worrying about finances,” Duggin said. “Give Tue UC Merced is a great event that allows donors to support the school and the students. Thank you to the donors who invest in the students at UC Merced — it really makes a difference.”