A social movement’s cause can be as diverse as the people who spur it in the first place —examples abound, from community organizations initiating struggles for neighborhood sidewalks and clean water to national level mobilizations led by labor unions and their allies against the privatization of education and healthcare.

But how do social movements get started? And why do some last while others wither? Ask Professor and Department of Sociology Chair Paul Almeida.

In his new book “Social Movements: The Structure of Collective Mobilization,” published by UC Press, Almeida breaks down how social movements can transform political and social structures, leading to enduring social change.

Social movements can take the form of demonstrations, rallies and marches and usually have one thing in common: They’re visible protests of problems, policies or issues. 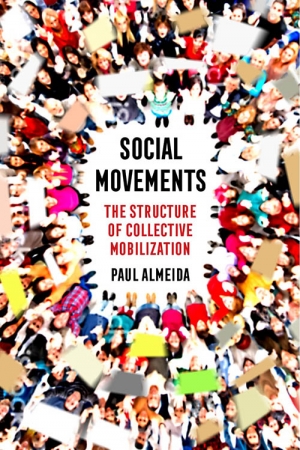 Professor and Department of Sociology Chair Paul Almeida explores how social movements form and their impact on society in his new book “Social Movements: The Structure of Collective Mobilization.”

Examples in recent years include the Women’s March as a response to the election of President Donald Trump and the Occupy Wall Street movement as a protest to the social and economic inequalities following the Great Recession. In the past few months alone, tens of thousands of citizens in the Climate Justice movement have mobilized actions in hundreds of cities around the globe to demand that national policy-makers act immediately to slow global warming and mitigate climate change before it is too late.

“A critical mass of individuals must come under the threat of a particular harm, such as discrimination, job loss, or environmental health, that motivates them to unify and launch a social movement campaign, especially when institutional channels fail to resolve the issue at hand,” Almeida writes.

Usually, groups that achieve critical mass are composed of individuals with little political and economic power.

In other words, there is strength in numbers.

In his book, Almeida details how disadvantaged groups emerge and spread as well as how individuals change from interested bystanders to active participants. Ancillary factors, such as social media’s influence, are also explored, as well as how a social movement can function as a resource for vulnerable populations in the future.