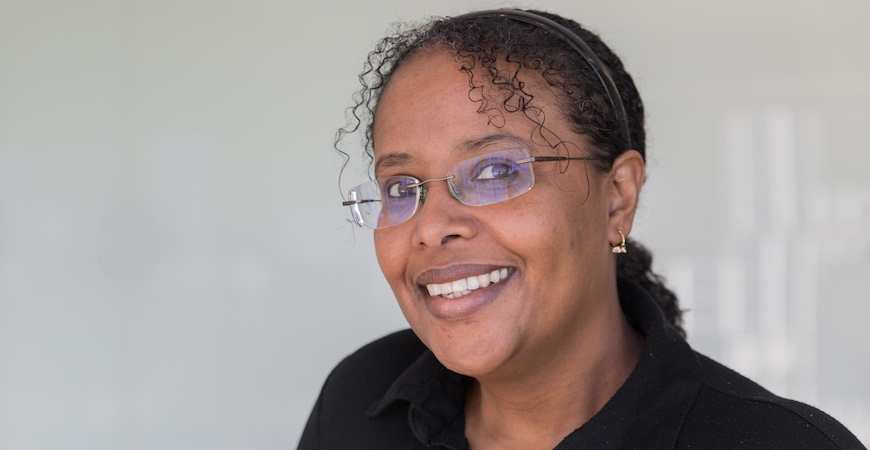 Funded by a grant from the Gordon and Betty Moore Foundation, New Voices seeks to build a “national network of exceptional young leaders who have demonstrated a commitment to leadership and serving the SEM community through science policy, communication, education, outreach, international or interdisciplinary engagement, leadership development and other activities.”

Berhe was selected from a competitive field of several hundred candidates to serve as part of the very first 18-member New Voices peer group, which includes distinguished early-career SEM leaders from a variety of disciplines. Berhe joins the group as a soil biogeochemist whose research focuses on how changing environmental conditions affect vital soil processes. Her on-campus affiliations include the Life and Environmental Sciences Unit in the School of Natural Sciences, the nationally-ranked Environmental Systems Graduate Group and the Sierra Nevada Research Institute.

New Voices group members are appointed for a two-year period. The inaugural cohort will receive guidance from a six-person senior advisory committee that consists of established leaders from the National Academies. They’ll work together to develop new ways to communicate science in ways that address pressing challenges on the national and global stage.

“The program is motivated by the need to communicate science to broad audiences and promote scientists' engagement with policy makers, the public and other scientists,” Berhe said.

I am honored by the recognition of my scientific work and service to my community that comes with this selection. I am excited to engage with member of the Academy and other New Voices in the coming two years.

According to Berhe, New Voices appointees will work on personalized goals that align with and advance the National Academies’ overall mission. For Berhe, that includes promoting an understanding and appreciation of ecosystem services provided by soil systems and increasing the recruitment and retention of women and underrepresented minorities in STEM fields, especially the geosciences, where only 20 percent of tenure-track positions are filled by women — a number that drops to 7 percent for women of color.

As a New Voice for the National Academies, Berhe will have a powerful platform that can help her pursue these goals and reach a larger, more diverse audience.

“The National Academies are an authoritative voice when it comes to standards for quality of science, as well as education, research, policy and standards of how we operate as scientists,” Berhe said.

Founded in 1863, the National Academies work to educate the public and provide scientific expertise and guidance on policy matters. The Academies are considered among the most prestigious and influential voices in the world of science. They count many of the world’s most distinguished scientists among their ranks, including 300 Nobel laureates.

For Berhe, the National Academies are familiar territory. She has chaired the Academies’ Committee for Soil Sciences since 2016 and served as a member since 2011. She’s also served on the Academies’ Board on International Scientific Organizations since 2015.

"I am delighted to be among the first cohort of National Academies New Voices in Science, Engineering, and Medicine,” Berhe said. “I am honored by the recognition of my scientific work and service to my community that comes with this selection. I am excited to engage with member of the Academy and other New Voices in the coming two years."

A computer science lab focused on making human-computer interaction easier for people of all abilities has developed a digital lip-reader complete with...

Professor Marc Beutel and his graduate student Mark Seelos have been recognized for papers and a presentation on toxic mercury mitigation by the North...