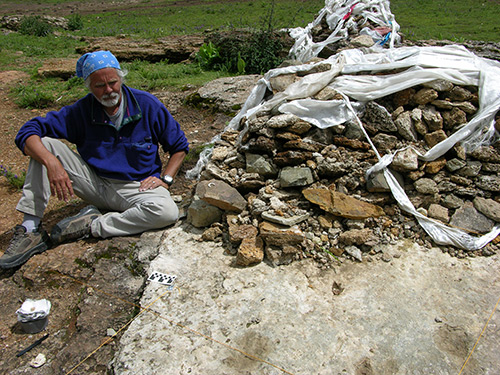 A new paper by UC Merced Professor Mark Aldenderfer begins to settle a longstanding debate over when people began permanently occupying higher elevations of the Tibetan Plateau, and shows communities did not have to be based around agriculture and domesticated animals to be permanent.

“Permanent Human Occupation of the Central Tibetan Plateau in the Early Holocene,” publishing Friday (Jan. 6) in the journal Science and available online now, challenges theories about the peopling of the Tibetan plateau. Some scientists have argued that people settled there at least 20,000 years ago, while others say permanent settlements at high elevations could only have been facilitated after 3,600 years ago by domesticated plants and animals.

Aldenderfer and his colleagues used a variety of techniques to date evidence found in Chusang — including human handprints and footprints preserved in the mineralized mud around a hot spring — and have concluded that hunter-gatherers settled in the central area of the plateau between 8,000 and 12,000 years ago. Examination of the earliest occupation sites turned up only stone tools — no evidence of domesticated plants, animals or ceramics.

The dates of those settlements correspond with discoveries of mutations in one of the genes of Tibetans that help them adapt to high elevations, about 8,800 years ago.

“People had speculated that permanent settlements there dated as far back as 50,000 years ago, but no one could find those early sites,” said Aldenderfer, who’s with the School of Social Sciences, Humanities and Arts. “Chusang is a site we worked at many years ago, and went back to try and test the theory of a group of Chinese geologists who believed settlement there to be 20,000 years old.”

Aldenderfer and his fellow researchers, including article co-author Michael Meyer from the University of Innsbruck, Austria, began reconstructing the chronology of the site.

It’s rare to find handprints and footprints preserved the way they were at Chusang, Aldenderfer said. Cave paintings sometimes show hand outlines, but the Tibetan prints were formed in the mud that became travertine stone. 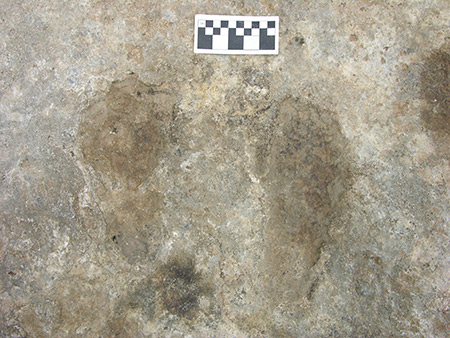 “It’s a unique site. We found prints from people of all ages near the hot spring, and stone tools above and below the site that date back to the same period,” he said. “There are some hand and footprints in Africa that date back 3.6 million years showing evidence of humans’ early ancestors, and you do find dinosaur prints that are far earlier, but they are very rare. Ours are young, comparatively.”

Over the past decade, the site has become a shrine for Tibetan Buddhist practitioners, and the prints have been worn away by people using the site to pray and using the hot spring for thermal baths.

UC Merced researchers have published several papers over the past year that add to the body of knowledge about high-elevation people.

In Spring 2016, Aldenderfer and colleagues showed that the genetic makeup of high-altitude Himalayan populations has remained remarkably stable despite cultural transitions and exposure to outside populations through trade from the earliest known human settlements to the establishment of the Tibetan Empire.

In the fall, a new study by Professor Emilia Huerta-Sánchez showed that high-elevation Tibetans got an evolutionary advantage because of genetic changes; and Aldenderfer and another researcher showed that people were domesticating potatoes in the high regions of the Andes about 5,000 years ago.

In addition, Aldenderfer’s work in the Himalayas was the subject of this week’s premiere episode of the new season of NOVA on PBS. The episode can be viewed online.

Aldenderfer said he hopes the new article will inspire other researchers to try and find other ancient sites on the plateau that date to the same period. The climate began to change for the better about 10,000 years ago, he said, so other sites should be there.