Two startup companies run by UC Merced alumni have taken big steps toward the kind of success many entrepreneurs can only hope for. 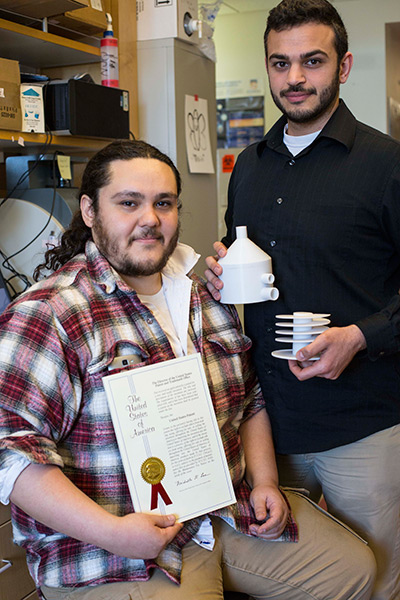 St. Vincent’s Solutions, which makes a humidifying respirator for premature babies, and Sweep Energy, which makes energy-monitoring devices for production facilities and farms, are both off the ground and running thanks in large part to the UC Merced Venture Lab. The two companies have or are working toward patents, lining up funding and making plans for manufacturing in the Merced area.

“We’re planning to expand to make a whole suite of products with the goal of making hospitals safer and cleaner for premature infants,” said Michael Urner, co-founder of St. Vincent’s Solutions, named for the patron saint of hospitals.

The project began when Urner and then-fellow engineering student Paul Barghouth partnered with Children’s Hospital to design a better way of keeping neonatal patients breathing safely and cleanly while in incubators.

“These babies’ immune systems are not well developed, and they have underdeveloped lungs,” Urner explained. “Normally, they would get immunities from breast milk, but these babies aren’t nursing in the incubators.”

The babies rely on medical interventions to reach full health, but the respirators that have been used until now — while once considered state-of-the-art — can contribute to health problems. They need humidified air to keep their lung tissue from drying and cracking and allowing in pathogens that can come from bacteria growing in the respirator hoses.

As students, Urner and Barghouth developed a breathing mask and a device that keeps the hoses at a constant temperature, prevents condensation where bacteria can grow, and keeps the air flowing gently through the mask.

They wanted to continue after earning their undergraduate degrees, and connected with the Venture Lab for a wide array of assistance, from networking opportunities and work and meeting space to access to resources such as the Small Business Development Center and legal guidance from law students at UC Berkeley, who offer pro bono help in Merced.

St. Vincent’s recently received a U.S. patent on the respirator that has been refined and improved, and have connected with an investor who is going to help them fund manufacturing. Urner said the respirator equipment can be assembled here, which would add jobs in Merced County and contribute back to the community.

“Startups flourish in places where there is a strong support network for entrepreneurship,” said Peter Schuerman, associate vice chancellor for Research and Economic Development and director of the Venture Lab. “The UC Merced Venture Lab program is about creating partnerships to make the San Joaquin Valley a place for entrepreneurs.” 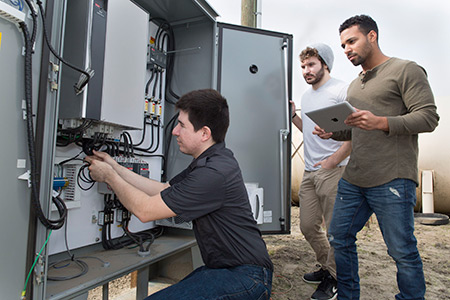 Like Urner, the partners running Sweep Energy say they owe a great deal to the Venture Lab, which has provided training in critical areas such as market research, resources such as legal advice, networking connections and quiet work spaces where they could plan, design and execute.

Most of Sweep’s partners also joined up because of a student project — the annual Mobile App Challenge.

Their three-man “Switch” team designed an efficient and low-cost home monitoring system, including a smart electrical outlet that could be controlled by a mobile app and won first place in the challenge in 2015.

“We also had an epiphany,” company co-founder Agustin Roldan said. “It made us realize how much energy people use — and waste.”

They were trying to decide what to do with their technology, when Venture Lab leaders encouraged them to explore all their options. Roldan, Matt Fostiropuls and Yi Lu added management and economics alumni Tamba Baldé and formed Sweep Energy, the company that is now focused on a product for smaller farms and other businesses to monitor and manage energy use and diagnose problems in equipment.

“Our goal is to help companies become more energy efficient and sustainable,” Roldan said. “We want people to have the power to control their energy use themselves.”

Smaller farms often cannot afford the kind of monitoring equipment larger, corporate farms have. The partners want to change that and keep their business in Merced, assembling as many of the product components here as possible, to add jobs to the local economy.

“The great thing about the product is that it’s relevant to agriculture, but it could be used in all types of industries, including commercial, manufacturing and medical,” Baldé said.

They are excited about their product, which is being used at a few small farms in the area, and said they cannot wait to take it to the general market.

There’s still some work to be done to reach that goal, but through their connections with the Venture Lab, the partners said they know they will get there.

“We’d be very hard-pressed to start a business in the tech industry here without the Venture Lab,” Roldan said.