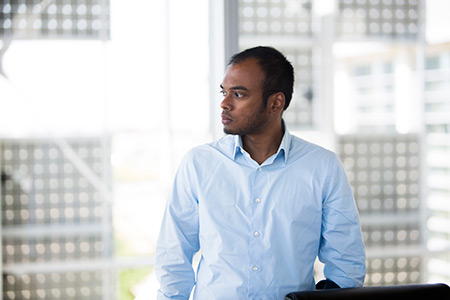 Scientists have been synthesizing lipid membranes from a variety of materials, making them as lifelike as possible to learn more about how cells work and how they can be manipulated.

UC Merced Professor Anand Subramaniam and his students have come up with a novel, portable and startlingly simple way to create cell-sized membranes out of the phospholipid molecules present in real cell membranes.

“We place a drop of liquid that can dissolve lipids — think a purer form of rubbing alcohol that contains lipids — onto laboratory filter paper,” Subramaniam said. “We allow the paper to dry, and then place it in water. Within an hour, we get cell-like membranes forming on the paper. The advantage of our method is simplicity and versatility.”

Subramaniam and his students — including graduate students Melissa Xu and Joseph Pazzi and an undergraduate student who spent a gap year working with the lab before going to medical school — were studying paper for use in diagnostic machines when they made this discovery.

The new approach is the focus of a cover story this month in the journal ACS Applied Materials and Interfaces.

Other techniques for synthesizing membranes have been limited by the types of molecules that could be used — for example, the number of charged molecules present — or by the need for expensive specialized equipment. But Subramaniam’s method can be used anywhere — even in space — which is why the research is partly being supported by UC Merced’s NASA-funded Merced nAnomaterials Center of Energy and Sensing (MACES).

“Paper is cheap, and it’s light and easy to transport,” the School of Engineering professor said. “The lipids on the paper form this bilayer structure that comes off the paper as cell-like containers. It is remarkable that we get these structures without using anything more specialized than water, paper and lipids.”

The new technique allows researchers to perform sophisticated biophysical experiments on these synthetic membranes using techniques that would normally kill living cells. The next step, Subramaniam said, is controlled encapsulation: putting DNA or RNA into the synthesized membranes to try and make reactions.

But this method has many potential applications, including targeted medicine, delivery of stem cells, immune cells or proteins, or introducing markers into people to diagnose diseases.

Even though the journal article is titled “Novel Application of Cellulose Paper as a Platform for the Macromolecular Self-Assembly of Biomimetic Giant Liposomes,” giant, in this case, is still extremely tiny. The liposomes are about 10-30 microns, or about .0004 inches. For comparison, a human red blood cell is about 5 microns across. A human hair is about 75 microns across.

Subramaniam is excited about the possibilities his new membrane-making technique holds.

“This is really going to advance our fundamental understanding by making it easier to make artificial structures that mimic biology,” he said.