Nearly 70 percent of Americans use some form of social media, according to a Pew Research Center survey. There is little doubt it affects our daily lives — but how?

UC Merced Ph.D. graduate Holly Rus recently defended her dissertation on social media and well-being. She and her advisor, Professor Jitske Tiemensma, have published a review of 26 scholarly articles on social media and romantic relationships in the journal Computers in Human Behavior. The research they reviewed was insightful, but not yet conclusive. 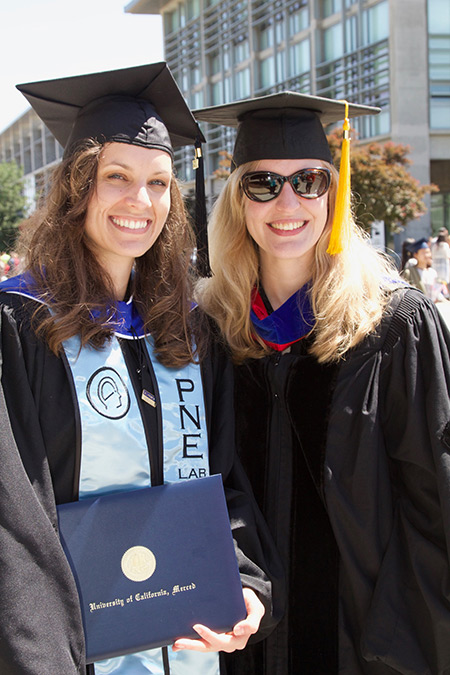 “We can’t draw conclusions yet as to whether it’s good or bad,” Rus said. “Social media is so multifaceted, and it serves so many different functions for different people, we’ll probably never really know.”

The literature — mostly based on surveys of college-aged Facebook users — reveals differences between how men and women use social media and how they perceive what they see on social media.

Men, for example, are more likely have jealous feelings toward other men who post nonverbal cues such as emojis and exclamation points on their partners’ pages. But women use social media more than men, and they often use it to maintain social networks.

“Social media is more valuable to women,” Rus said. “In general, they care about it more than men do.”

That jealousy isn’t as prevalent among older social media users, though, Rus said.

Because social media is relatively new and still developing, Rus and Tiemensma are interested to see more research into the behaviors that are enabled and created by social media. For example, because so much can be done online anonymously, is social media enabling people to monitor their partners more closely, or is it creating that behavior in people?

“In many cases, people find themselves in situations that would not exist but for social media,” Rus said.

Both researchers study stress and coping mechanisms, and while Rus hadn’t envisioned her work at UC Merced focusing on Facebook, “It became really interesting.”

In one, they induced stress in volunteers by having them speak publicly and do math calculations out loud, then allowed half the people to use Facebook for half an hour while the other half of the people sat quietly and read magazines for half an hour.

Rus and Tiemensma measured the volunteers’ physiological stress by checking the cortisol levels in their saliva, and their psychological stress levels by surveying them. The people who used Facebook said they felt less stressed after half an hour, but their bodies showed they were not.

“That’s pretty common,” Tiemensma said. “People are not very in-tune with their bodies.”

The studies are novel, Rus said, because most research on the subject involves surveys rather than physiological measurements.

Now that she has completed her Ph.D., Rus is leaving the School of Social Sciences, Humanities and Arts at UC Merced for the research labs of UC San Diego, where she will hold a postdoctoral researcher position. She’ll examine privacy concerns around big data and health technology and how willing people are to participate in technology that gathers data from them.

“Technology is going to continue to evolve, and we’re going to need to understand how it impacts our lives,” she said.