If you want to know what the ocean really smells like, you’ll have to ask a crab.

Yes, crabs have a sense of smell. 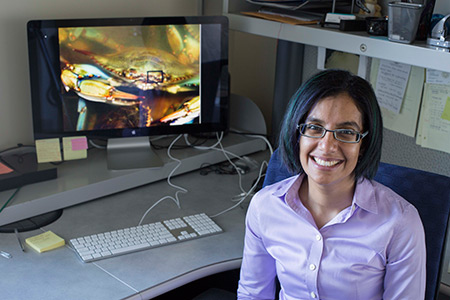 In humans, chemicals in the air flow into our nasal cavities toward specialized sensory cells. Olfaction occurs when odorant molecules bind to specific sites on the olfactory receptors, or chemosensors.

But crabs don’t have closed-in nasal cavities like humans do, of course. Like all crustaceans, they have arrays of hair-like chemosensors called aesthetascs that pick up chemical cues flowing past them in air or water.

By looking at the air and water flows around marine and land-dwelling crabs, applied mathematics Professor Shilpa Khatri, with colleagues Lindsay D. Waldrop and Laura Miller, calculated the chemical uptake of the aesthetascs on the antennule that crabs flick and wave to detect food, mates and enemies.

An important step in all olfaction is odor capture, and it turns out that water-dwelling blue crabs can capture odors nearly as well in their environment as land-dwelling hermit crabs do in the open air, as Khatri and her colleagues wrote in the Journal of the Royal Society Interface.

That’s surprising, given that water is far more viscous than air and the diffusion of similar chemicals typically is thousands of times greater in air than in water, the researchers wrote. They noted that the crabs’ aesthetascs have developed in different patterns that allow them to capture odors efficiently.

Khatri, with the School of Natural Sciences, normally works on fluid-structure interactions. Much of her recent work has been sea-focused, including studying the dynamics of “marine snow,” a shower of organic material falling from upper waters to the deep ocean, and the changes in water flow caused by soft, pulsating corals.

In this case, the fluid was the air or water, and the structure was the crabs’ aesthetascs. Working with Waldrop, a former UC Merced biology postdoc she has known since her own postdoc days, gave Khatri a crabby lesson in biology.

“This took a lot of learning for me, because I knew nothing about crabs,” Khatri said.

But Waldrop built physical models of the crabs and measured flow fields to couple with Khatri’s super-calculations. Measuring the structure of odor plumes around the antennule helped Khatri figure out how much the crabs could smell.

The question isn’t which has more smell, air or water, it’s how efficient the crabs are at picking up the chemicals in their environments. Both species have survived for millions of years, and studies like these provide insights into how various species have terrestrialized over generations.

“I love that we are able to use applied math tools to answer questions in biology,” Khatri said. “This helps us understand how crabs have developed to live on land or water, and some of the adaptations necessary to transition from water to air.”