By Brenda Ortiz, University Communications
September 21, 2017
Driven by increasing popularity and demand, the campus’s enrollment for Fall 2017 includes 2,449 first-year and transfer students and a 13 percent increase in graduate students 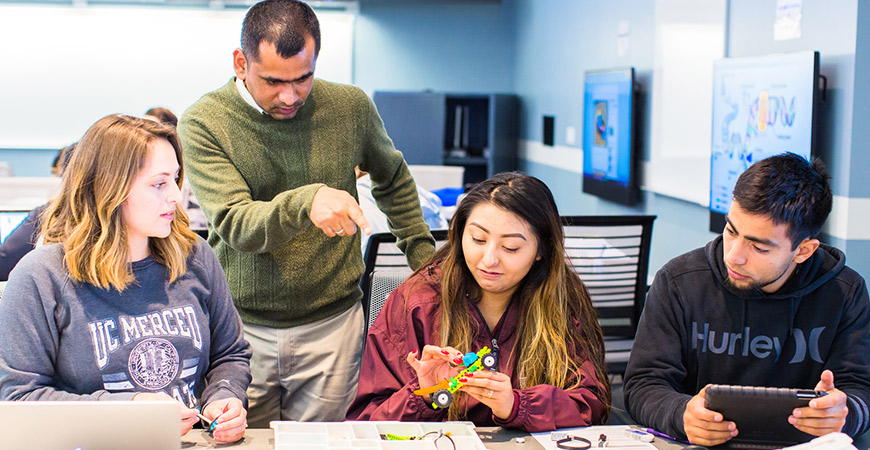 The University of California, Merced, received the largest incoming class of students in its 13-year history this semester, as total enrollment neared 8,000 for the first time.

The fastest-growing university in the nation, according to the Chronicle of Higher Education, UC Merced now enrolls 7,375 undergraduate and 592 graduate students for a total of 7,967 students — an 8.6 percent increase from 7,336 in 2016, as reported in the university’s fall census.

“UC Merced’s record enrollment is fueled by growing popularity and increased demand, as demonstrated by a significant increase in applications and subsequent registrations to our campus,” Chancellor Dorothy Leland said. “We continue to support our students on their academic journeys by placing a strong focus on the development of academic programs, hands‐on research opportunities for undergraduates and a growing array of student activities and amenities.” 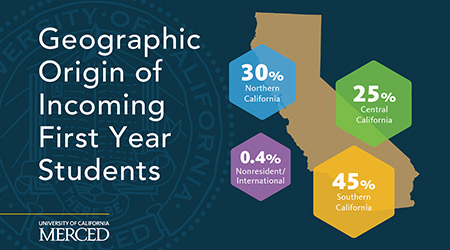 Undergraduate students come to UC Merced from all areas of California.

The campus’s incoming class of 2,293 first-year students, 156 transfer students and 156 graduate students is its largest class. Among the incoming students are 173 from high schools in Merced County — the most in the campus’s history.

“This year we exceeded our enrollment targets thanks to increased recruitment and retention efforts across campus,” Vice Chancellor for Student Affairs Charles Nies said. “Even with our remarkable growth, we are committed to developing opportunities for our students to be successful academically and personally in order to make timely progress to their degree.”

UC Merced is an increasingly vital component of the UC system’s efforts to increase access for all qualified Californians, regardless of financial need.

We continue to support our students on their academic journeys by placing a strong focus on the development of academic programs, hands‐on research opportunities for undergraduates and a growing array of student activities and amenities.

Nearly all of UC Merced’s students hail from California, and as many as 75 percent of first-year students are first-generation college students. The campus enrolled an estimated 66 percent Pell Grant-eligible first-year students in 2017, representing students with the highest level of financial need, and expects to distribute approximately $150 million in financial aid and scholarships during the academic year.

Of its total undergraduate population, 72 percent are first-generation students and 63 percent are Pell Grant-eligible — the largest percentage within the University of California system.

U.S. News & World Report’s “Best Colleges” rankings, released earlier this month, positioned UC Merced as the No. 1 public university in the nation for financial aid given to first-year students, No. 15 in the U.S. for the lowest average debt among graduates from public universities, and No. 87 among public universities overall.

Our growth this year — nearly all of which is due to an increase in enrolled doctoral students — is indicative of the excellent faculty and research opportunities that our campus has to offer.

“I’m proud to say that UC Merced continues to attract and enroll graduate students of the highest caliber,” said Vice Provost and Dean of Graduate Education Marjorie S. Zatz. “Our growth this year — nearly all of which is due to an increase in enrolled doctoral students — is indicative of the excellent faculty and research opportunities that our campus has to offer.”

To accommodate enrollment growth, a major campus expansion is well underway via the Merced 2020 Project. By this time next year, three new buildings will be completed, along with a new entrance to campus. By 2020, the campus will be large enough to accommodate up to 10,000 students.

More than 40 new ladder-rank professors — hailing from universities like Harvard, Yale and the Massachusetts Institute of Technology — joined the UC Merced faculty this year. That’s the largest single group of faculty members since the campus broke ground in 2002 and brings the total number of faculty members to 260.

Nature Retreat Teaches Students the Importance of Service to Community

UC Merced students will be able to earn money for college by helping Merced County kids become strong readers thanks to a pilot grant from the AmeriCorps Service Fellowship program. The grant,...

Before a packed crowd at the Dr. Lakireddy Auditorium, bestselling author Michael Lewis conversed with interim Chancellor Nathan Brostrom about the future...