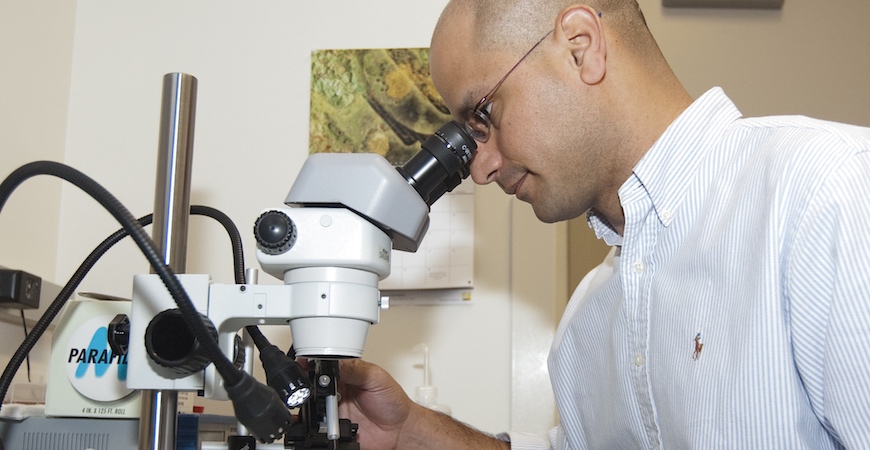 Professor Nestor Oviedo in the laboratory.

Scientists have long known that cells originating from an animal’s anterior — the body’s upper half — tend to grow, divide and survive better than those from the posterior. Studies show this to be true in cancer as well, with anterior cancers metastasizing more aggressively. Now scientists are beginning to understand why.

“Planarians are a model system that are easy to grow in lab and provide valuable information that can be applied to humans,” Oviedo said. “The mechanisms that planarians and humans use to control cells are widely conserved.”

That means if a gene or protein regulates a particular process in planarians, there’s a good chance it controls the same process in humans.

The researchers showed that Ubc9, a gene found in both planarians and humans, plays an important role in region-specific cell proliferation, cell death and the cell’s response to DNA damage.

“We turned off this gene and found that cells in the anterior part of the animal kept living while posterior cells died,” Thiruvalluvan explained. “So we dug deeper and found all kinds of interesting things.” 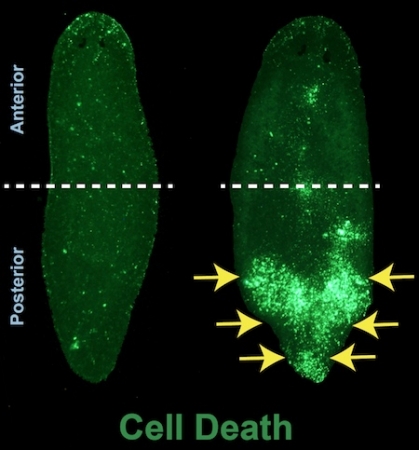 What they saw was more than just localized cell death. Planarians without Ubc9 were losing their entire lower body. The upper half, however, remained largely intact. Shutting off Ubc9 also resulted in tremendous DNA damage everywhere in the animal.

Cells are always on the lookout for DNA damage. If the damage is sufficiently severe, cells initiate the process of programmed cell death. But sometimes cells fail to notice DNA damage and continue to divide, perpetuating damage into the next generation.

“When cells bypass DNA damage surveillance mechanisms and divide, this is a critical step in cancer,” Oviedo explained. “Cells with DNA damage need to either repair their DNA or die to prevent cancer. Posterior cell death is a good thing because they have DNA damage that failed to repair.”

But Oviedo and his colleagues wanted to know why anterior cells seemed able to bypass cell death, even though they incurred enough damage to activate the process.

To their surprise, the researchers found that neither the cells that died nor those that survived were able to repair DNA damage. In fact, silencing Ubc9 prevented cells from activating the DNA damage response. Instead, they found that Ubc9 controls a molecular pathway known as hedgehog signaling. Silencing Ubc9 was causing hedgehog to go awry.

The most significant part of this is that we found a way to activate death in cells with DNA damage by repressing a specific pathway.

“We found that repressing hedgehog caused posterior cells to die, demonstrating that hedgehog is essential for maintaining posterior cells in planarians.” Oviedo said. “This is significant because it means we’ve identified a mechanism that controls the collective behavior of cells with DNA damage in a particular region of the body.”

This discovery hints at why anterior cancers are more aggressive — they’re better at bypassing the cell death process. It also suggests a potential new target for cancer therapy.

“The most significant part of this is that we found a way to activate death in cells with DNA damage by repressing a specific pathway,” Oviedo said. “This could lead to developing a therapeutic approach that targets these cells.”

Though their results may one day lead to novel cancer therapies, the researchers recognize there’s more work to be done. They still don’t know why shutting off Ubc9 led to so much DNA damage. Nor does their discovery explain how anterior cells managed to survive the damage.

“The next step is to try to answer these questions,” Thiruvalluvan said. “We’re now using high-throughput sequencing to identify candidate genes that maintain anterior survival in the presence of extreme DNA damage.”