Postcards, Persistence Paid Off for Merced 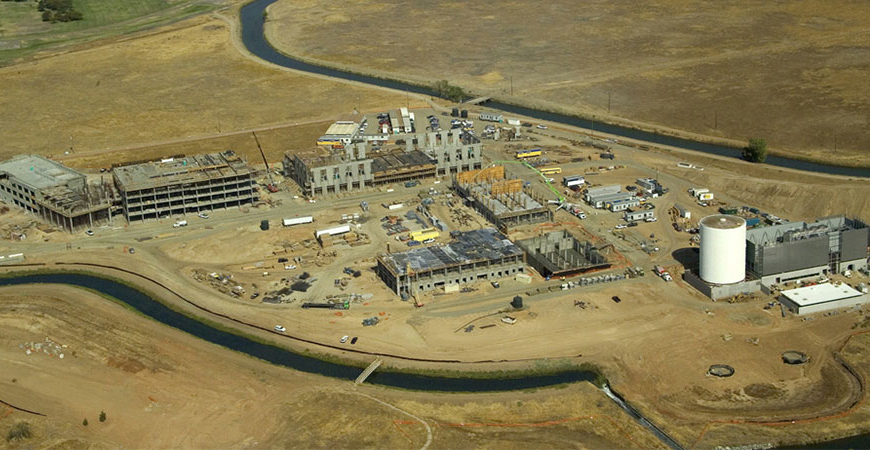 UC Merced opened in 2005, but efforts to bring a UC campus to the heart of California started decades before.

Yazil Navarro might have played a bigger role in the founding of UC Merced than she realizes.

As a Merced County second-grader, Navarro — now the learning and professional development manager in Human Resources at UC Merced— was one of hundreds of schoolchildren who wrote postcards in 1995 to the University of California Board of Regents, imploring them to choose Merced as the site of the system’s next campus.

“I drew a big building with a whole bunch of kids — stick figures — and made it very, very colorful,” she said with a laugh, remembering her card. “I said something about how all the kids in this area would be eternally grateful, so please, please, please bring us UC Merced.”

The postcard campaign was the final step in a complicated process that started 29 years ago and could have ended with UC Madera instead of UC Merced.

Back in 1988, when the UC announced it would build a 10th campus, few thought Merced would even be in the running.

But a group of community members, policy makers, business leaders, legislators and other supporters saw an opportunity to help transform the region’s educational opportunities and economic fortunes. They formed the University Committee of Merced (UC Merced for short), and embarked on a crusade to convince the UC that Merced was the best location.

“That’s when my involvement started,” former committee Chairman Bob Carpenter said. “We got this group of like-minded men and women together, and we focused on trying to present Merced as the best possible choice.”

The following article appeared in the September 2017 issue of Merced Monthly, an e-newsletter for the UC Merced campus community and friends. To subscribe, click here. 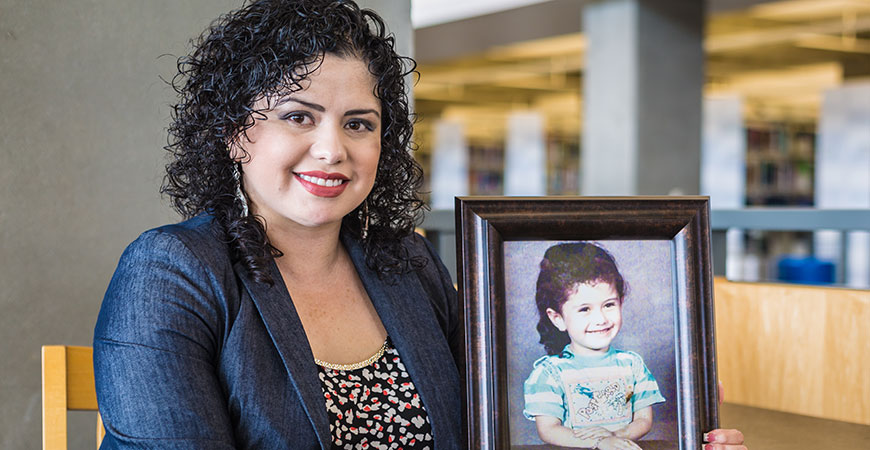 UC Merced staff member Yazil Navarro was one of hundreds of local kids who wrote postcards imploring the regents to choose Merced for the next UC campus.

Think of the Children

The UC Office of the President originally considered about 85 possible sites for a new campus, narrowing the list fairly quickly to 30, then 15, then three and then two: Madera and Merced. The committee worked every angle, from editorial board meetings and individual meetings with regents to the postcard campaign, to convince UCOP that the underserved Merced region deserved a UC campus.

“We simply told them the Merced story, which we thought was pretty compelling,” Carpenter said.

“One of the things that always struck us was there was not a single letter of opposition to the campus in our newspaper between 1988 and 1995,” said former committee member Tim O’Neill, owner of ImageMasters marketing consultants in Merced. “There’s a lot of pride in Merced, and we were fighting for the future of the kids in this area. It was important to us to give the kids a chance they wouldn’t otherwise have, because a lot of them just couldn’t go away to college.”

“Merced had a lot of advantages,” said former committee member Roger Wood, of JR Wood produce packagers in Atwater. “We had a clean bill of environmental health, we had the donated land for the regents, and they could choose any spot on 8,000 acres they wanted. We had enough water for the site and we had a need. The Fresno area already had CSU Fresno.”

The committee linked up with then-Assemblyman Dennis Cardoza, and made brochures about Merced and the Virginia Smith Trust land on which the campus now sits, developing answers to every question the regents might ask. They were looking for something that could to punctuate their message to the board, when committee member Larry Morse suggested the postcards from local children.

“We had given it our best and it was coming down to the vote. We were brainstorming any tactics we could think of to let the regents see the depth and breadth of the community’s support for siting the campus here,” said Morse, now the Merced County district attorney. “This really was a community effort.” 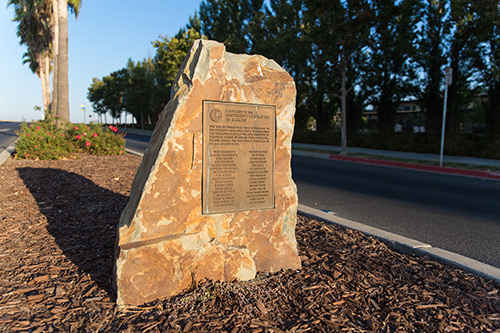 A monument to the committee members who lobbied for the UC's newest campus to be in Merced sits on Scholars Lane near the Lake Road entrance.

A Flood of Postcards

Wood bought up every postcard he could find in Merced and Atwater, forcing the post offices to restock more than once, and he and his staff bundled and distributed about 5,000 blank cards to area schools. Kids like Navarro made their creative pitches, and they worked. The regents voted 19-3 in favor of the Merced site.

From the Los Angeles Times, on the regents’ approval:

“Regent Clair W. Burgener of Rancho Santa Fe held up a stack of mail he had received, much of it from backers of the Merced site. ‘My mailman is vitally concerned about this,’ he joked.

“‘I got a postcard from God,’ he told the board, prompting cheers from the audience. ‘He told me to vote for UC Merced.’"

That vote, however, was just one in a series of hurdles that had to be cleared before the campus could actually come to life, including financial warnings the regents issued that day. UC President Jack W. Peltason said he had no intention of lobbying for the $750 million needed to build the campus, and estimated it would be another 10 years before the campus became a “front-burner issue” for the UC.

That wasn’t good enough for the committee and supporters, including some big names in Sacramento.

I got a postcard from God. He told me to vote for UC Merced.

Cardoza wasn’t too shy to make a nuisance of himself when he needed to.

“One thing we had to do was get bond money,” he said, “but because the money had to be split three ways between the UC, the CSU and community colleges, we had to get three times as much as we needed. I went to the man who made that decision and stood next to his desk for hours, until he realized I wasn’t going to go away, and he finally relented.”

But more money was needed, and there was a lengthy planning process and many environmental regulations and objections to address.

Carol Tomlinson-Keasey was the vice provost for academic initiatives in the UC Office of the President in 1998, when she was chosen to organize and direct the planning effort of UC Merced.

“We became immediate, lifelong friends,” Cardoza said of Tomlinson-Keasey, who became UC Merced’s founding chancellor. “We worked as a team to overcome all the obstacles in our way.”

The campus had support from governors George Deukmejian, Pete Wilson and Gray Davis, but that didn’t prevent the contentious environmental approval process that included lawsuits to protect endangered species, including the fairy shrimp that live in the vernal pools on the open land adjacent to campus. The site had to be moved to the place where campus stands now, which used to be a golf course.

Tomlinson-Keasey worked tirelessly to convince decision-makers that a UC-caliber research university in the heart of the San Joaquin Valley would bring lasting benefits to a largely underserved region of the state, all while privately battling the breast cancer that took her life in 2009. She saw the campus open and served as chancellor for its first year in operation, and Carpenter, Morse, O’Neill and Wood all agreed she would be proud of the campus and how it is growing, including the Merced 2020 Project.

“I believe she would say the campus has already made a big difference in the area,” O’Neill said.

Many of the former committee members are still involved with the campus in different ways, from helping student programs to helping fund scholarships. Cardoza said whenever he comes back to Merced, he visits the campus to quietly walk among the students, faculty and staff.

He has many memories of opening weekend in 2005, but one stands out especially: He and others from the community brought hand-trucks and helped the first students move in to the residence halls that weekend.

“The students didn’t understand why we were so emotional,” Cardoza said. “They had no idea what we had gone through, the work that went into being able to see them start college in Merced. UC Merced is a living legacy for all of us who worked to make it happen.”

“(The campus opening was) pretty emotional for all of us,” Carpenter said. “It was such an effort. Even now, when I go out there, I think, ‘My god, this is real!’”