By Lorena Anderson, University Communications
May 8, 2017 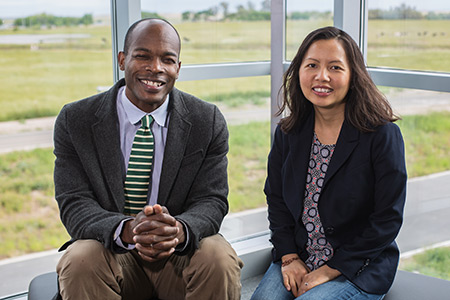 Often, when people talk about or study refugees, the focus is on policy, rescue operations or terrorism. Rarely is the conversation centered on refugees as human beings.

But a new collaboration among five UC campuses — including UC Merced — is working to change that.

The Critical Refugee Studies Collective (CRSC) is funded with $1.6 million for its first four years through the University of California’s Multicampus Research Programs and Initiatives grant program. The overarching goal is to make the UC the premier institution for critical research, teaching and public initiatives on refugees. Locally, the collaborators want to create a think tank that can inform policymakers, nongovernmental organizations and others who work with and on behalf of refugees.

UC Merced, UC San Diego, UC Riverside, UC Berkeley and UCLA are all part of the collective, and four of the five campuses, including Merced, will host one year of the program, each with a different theme.

Professors Ma Vang and Nigel Hatton, with the School of Social Sciences, Humanities and Arts, are the campus leads for UC Merced.

“We each come to this with our own specialties and expertise, and we hope to critically expand and inform the ways in which the academy approaches refugee studies as well as humanitarianism and human rights,” Hatton said. “We need to understand refugees as agents, subjects and humans, not as objects and mere receivers of humanitarian good will.”

Refugee resettlement is a timely issue, and California has welcomed hundreds of thousands of refugees over many years without truly understanding their stories.

CRSC will bring cultural studies and humanities scholars together to better understand one of the defining issues of the 21st century: the refugee experience in both past and present as war and climate change continue to displace millions of people around the world.

A major part of the project is to give grants to related projects that will help build the field of study around refugees, Vang said. The call for proposals closes May 15, and ideas could come from anyone — undergraduate students, graduate students, faculty, even community members — as long as they plan to be engaged with the topic from a human perspective.

“We don’t want to continue the same kind of work that has been and is already being done,” Vang said. “One of our goals is to better understand how refugees see home, place and movement, and to learn how they share and archive their stories. This is the humanities taking on what has traditionally been a sociology subject.”

California has settled 700,000 refugees since the mid-70s, and this research is aimed at informing the policies and practices that shape the refugee experience in California and beyond, and to create a long-term presence for these studies beyond the life of the grant.

“Refugees are not ‘other,” she said. “They may be citizens or minority groups who are made into refugees through processes — wars and conflicts — that seem secretive but are not; they are fundamental to the way nation-states operate.”

But refugees become people without countries, and even after they are resettled, their status often remains “refugee,” she said. Vang who studies the Southeast Asian communities, histories and cultures, wants to understand why that is.

Hatton studies literature as a bridge between abstract ideas and realities of global justice. He’s interested in understanding how storytellers, artists and others who store and share knowledge in refugee communities can be part of a larger discussion about human rights, humanitarianism and international justice.

“This work could be instructive for humanitarian elites who work for justice but don’t necessarily understand the experiences, traditions and lifeworlds of the people they are trying to help,” Hatton said.

When UC Merced hosts a year of the CRSC, the theme will be “secrets and stories.” The researchers plan to host two conferences a year and collect their work into an anthology at the end of the four-year grant so that their work is available to the communities that contribute to it and others.

“You have to start with the stories to have an effect on policy,” Vang said. “It’s only when we listen that we hear.”