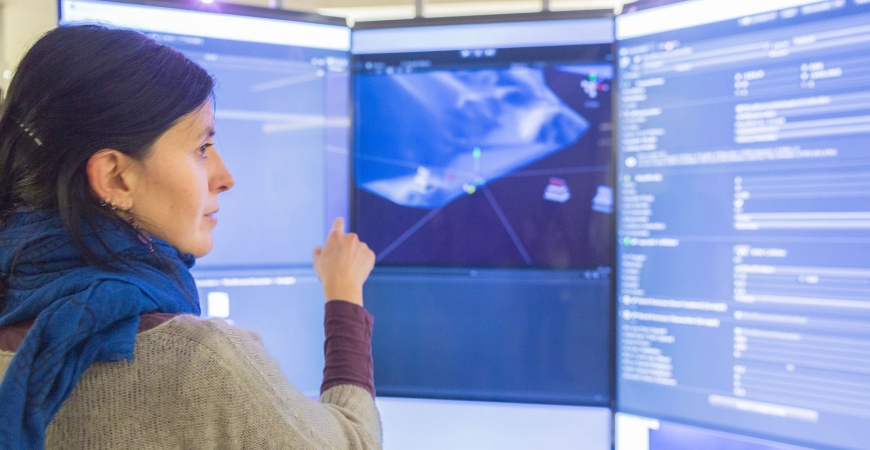 The LibraryCAVE 3-D visualization system was made possible by the Kolligian-Kashian Library Endowment.

Decades ago, attorney Leo Kolligian was one of the early champions of a new University of California campus in the San Joaquin Valley.

His years of unwavering leadership and commitment helped pave the way for UC Merced, the system’s 10th and newest university. Today, that legacy endures in the library that bears the Kolligian name and the Kolligian-Kashian Library Endowment that provides continuing financial support.

“Funds like these can be critical in supporting the mission of the university and the goals of the library,” University Librarian Haipeng Li said. “We heavily rely upon these gifts, and the Kolligian-Kashian fund has been instrumental in helping us.”

Donors to UC Merced — and the library supporters in particular — are visionaries who can see the promise of a new university and the benefit to the region and beyond, Li said. 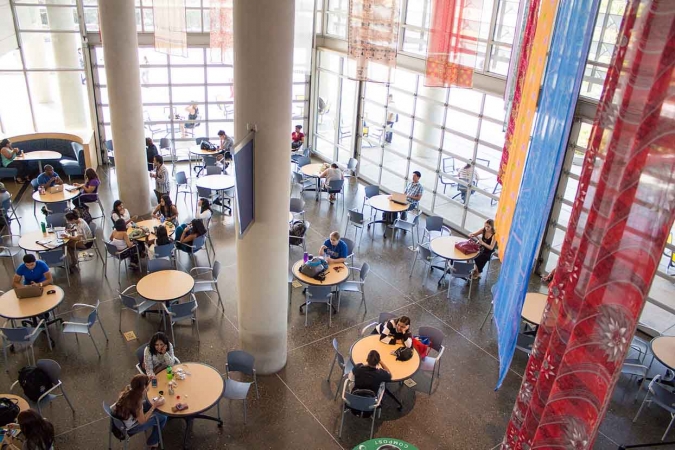 The first floor of the library is named for the Kashians, philanthropic leaders and prominent supporters of UC Merced.

Endowments often represent some of the most flexible funds available to a university. The Kolligian-Kashian fund has supported everything from new technology and student instructional assistants to prizes for UC Merced’s student research competition and supplies for the library’s two aquariums.

Gifts from Leo and Dottie Kolligian and their extended family, along with friends and business partners Ed and Jeanne Kashian, helped endow the permanent fund. The first floor of the library is named for the Kashians, philanthropic leaders and also prominent supporters of UC Merced. The Kolligians and Ed Kashian were founding members of the UC Merced Foundation Board of Trustees.

Both families appreciate the transformative nature of higher education and the importance of research – including the role of the library in that research.

The late Leo Kolligian was a driving force behind the new UC campus. The Fresno native and UC Berkeley Boalt Hall School of Law graduate served on the UC Board of Regents for more than a decade and was an outspoken advocate for a Valley campus.

Son Lee J. Kolligian, also an attorney, said his late parents were committed to that idea. His father believed that the area had been neglected and knew that the region’s students were underrepresented at UC campuses. In addition, he worried about the “brain drain” — promising students who left the Valley to attend college and never came back.

As a member of the Board of Regents, and as chairman, Leo Kolligian seized the opportunity to lobby for a Valley campus. Lee Kolligian said his father later thought it was fitting to place the family name on the library — one of the first buildings constructed — and to support it through the endowment.

“I think that the librarians and chancellor have done an excellent job in making the library a state-of-the-art facility and something to really be proud of,” said Kolligian, who currently serves on the Foundation Board of Trustees.

The endowment allows us to do other things than just the basic necessities of running a library.

Decision-makers weigh the benefits to students, research and the campus environment when determining which library projects to fund.

“The endowment allows us to do other things than just the basic necessities of running a library,” said Donald Barclay, deputy university librarian.

Through the fund, the library has updated its book security system, provided power and data for a LibraryCAVE 3-D visualization system, supported a collaborative project to promote undergraduate information literacy and writing fluency, and purchased “Structures of Utility” photographs now on permanent display.

According to Barclay, architects planning the campus considered David Stark Wilson photos as part of the process. The black-and-white photos are both artwork and a piece of the campus story preserved through the Kolligian-Kashian fund.

Barclay said Kolligian fully understood the educational and research role of the university. “We really appreciate what he did for the campus,” he said.